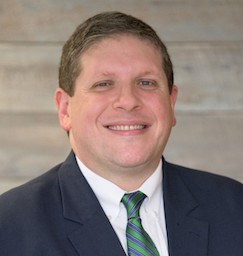 Massa – who comes to WYES after 27 years at WWL-TV, most recently as executive producer of special projects – follows Robin Cooper, who was named WYES president and chief executive officer in July.

Massa’s connections to WYES date back more than 30 years, beginning as a volunteer for the station’s Showboat Auction fundraiser. That grew into a role as an intern and production assistant with WYES senior producer Peggy Scott Laborde on her weekly arts and entertainment program “Steppin’ Out” and then work as a freelance producer on dozens of WYES documentaries and local programs.

“Dominic has been a valued asset to WYES through the years and has demonstrated his dedication, passion and support for the station,” said Cooper. “His unique perspective of both public and commercial broadcasting, his leadership abilities and strong local community connections will make him an invaluable member of the WYES team.”

“WYES has always been a second home to me,” Massa said. “From the very first day I walked into the studio as a teenager, I knew it was a special place. My appreciation for the important role it plays in our community – particularly as New Orleans’ storyteller – has only grown since then. I’ve been fortunate to be associated with the station while working at WWL and am thrilled to have the opportunity to serve in this new role.”

He earned a Suncoast Regional Emmy award for his documentary work and was a member of the WWL-TV news team which earned a George Foster Peabody Award, duPont-Columbia Award and national Edward R. Murrow Award for coverage of Hurricane Katrina.

Massa is a past president of the Press Club of New Orleans and the winner of multiple awards from the organization, including the top prize for broadcast reporting, the Jim Metcalf Memorial Award.

He will assume his new role at WYES in October.