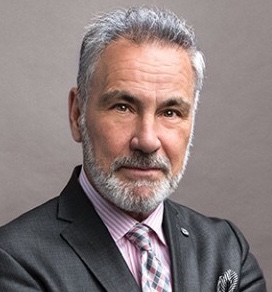 Michael Hecht, GNO Inc. president and CEO, praised Webb for “his many contributions to the economic vibrancy of the region and for his experienced leadership in helping to support regional companies as they have sought to grow their presence in the global marketplace.” According to Hecht, in addition to being “a strong advocate for international trade and commerce, Ed deserves credit for understanding the changing dynamics associated with fostering and sustaining international trade relationships and the need for greater regional coordination in these efforts. That understanding helped inform his decision to embrace and help facilitate the Trade Center Organization’s integration into GNO Inc., an action that has reinvigorated international trade for the region.”

Kristi App, vice chair of the World Trade Center of New Orleans, said “Ed immediately infused the organization with new life. He brought stability and quickly led work on a new and badly needed strategic plan to help chart a responsible and workable plan for the future, and, in the process, made a significant difference for the organization itself and for numerous companies that benefited from his insights, experience, energy and determination to help them succeed.”

App also highlighted Webb’s work to help the Trade Center survive and continue to provide member services through the difficult challenges brought on by the COVID-19 pandemic.

A native of Louisville, Kentucky, Webb previously served as president and CEO of the World Trade Center of Kentucky and as Honorary Consul for the Republic of France. Webb is a noted author and speaker on matters of international trade and commerce, gained, among other experiences through work in the United Kingdom, France, India and Argentina, as well as study in Russia.

“When I made the decision three and a half years ago to become executive director of the very first World Trade Center in the U.S. I could not have been more proud or honored with that opportunity. It has been the most interesting challenge of my life and I have enjoyed every minute of it and my time in Louisiana. While I know traditions run deep in New Orleans, and change is not easy, I’ve always believed that an essential element of true leadership is having a vision for their future while respecting the past. Our board demonstrated that kind of leadership in assimilating into GNO Inc., and I applaud and fully support that decision.

“Together we reimagined our future growth and partnered with GNO Inc., in a bold move that serves to make the future for the organization and the region even brighter. I am so appreciative of the WTCNO Board and staff for my exciting and rewarding years in New Orleans and for the many wonderful friendships and memories along the way.”

Moving forward, WTCNO will continue to support, promote and attract international trade and businesses for the benefit of Louisiana. Beginning in January, Harrison Crabtree will assume responsibilities as director of World Trade Center New Orleans @ GNO Inc. Under his leadership, the organization will strive to be the premier voice of international trade and business in the Gulf South, focused on nurturing a vigorous and growing international business community, supporting Louisiana’s status as the “gateway to North America.”