Wishing on a Star

Starlight Studios is betting big on a strong future for Hollywood South.

There is hope in the film industry.

The biggest example of which is the opening of Southeast Louisiana’s newest film studios — Starlight Studios, which opened June 19.

In a clear example of “go big or go home,” the $12.5 million studios encompass a 12-acre campus that includes two sound stages, 14,000 square feet of office space, three warehouses (together amounting to over 50,000 square feet of storage space) and backlot spaces.

Instead of a takeover of an existing warehouse, Starlight represents the first filming infrastructure created from the ground-up in Louisiana in almost 10 years.

The project has been a dream of Starlight’s President, Billy Burk, since around 2010.

A real estate developer since 1997, Burk was called on in the early 2000s to work as a consultant for a company looking to build a studio and get into production. The project didn’t’ come to fruition, but it did spark Burk’s interest in the industry.

Burk says regardless of the negative headlines that started popping up in 2014, when he was speaking with congressmen he was finding that most had a high respect for the industry.

Burk continued to raise capital for his dream, along the way meeting Kevin Murphy, who had experience managing studios in California, Baton Rouge and New Orleans. Murphy now serves as Starlight’s COO.

In 2015, the same year the tax credit cap hit, spiraling the industry into uncertainty, Burk finally closed on the loan for the studios.

And then came the tornado.

On February 7 of this year an EF-3 tornado, the strongest ever reported in the city, hit New Orleans East. Wind speeds reached between 136 and 165 miles per hour. Approximately 300 structures were severely damaged, including some on the same street as Starlight, set to open just four months later.

During the studios’ grand opening on June 19, visitors drove right by the torn up neighbor to the gleaming new studios.

Burk says despite all this, the timing for the opening has been great. 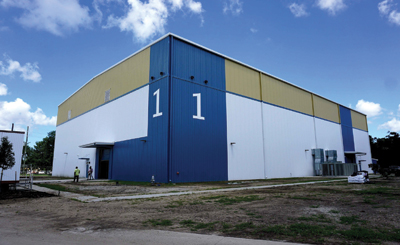 “As soon as we announced, we were booked,” he says.

The largest of the sound stages is Stage 1 at just shy of 33,000 square feet. As of the opening, it was leased to a TV production that was also using the largest of the warehouses and all the office space.

With either one large production or two good-sized productions, Burk says the studios easily employs north of 200 people.

What exists of Starlight now, however, is only the beginning.

Plans are already permitted for phase two of the project, which includes another two sound stages and another warehouse and office building — an investment of about $28 million.

The third phase, not yet permitted, will include more stages at a cost of an estimated $55 million.

“That still won’t utilize all of the space we have,” Burk says, noting that Starlight owns 32 acres and leases more, bringing the total acreage to what he says is “north of 40 acres, almost 50.”

Touring the studios and standing in a real, professional sound stage reaching four stories high, it was easy to see the potential of what it could bring for the industry, and the state. However, it was also hard not to remember back to just a few years ago when I attended the exciting opening of another New Orleans East studio, Filmworks, which also touted the fact that it was booked up before its grand opening. Just two years later, its doors closed for good.

Of course things are different now. Changes have been made to the credit system to provide some much-needed stability that will likely help draw production. We seem to be coming out of disaster, not heading toward it.

But still, standing in Starlight’s parking lot looking over at the destruction next door was a painful reminder that nothing is ever certain.