Louisiana’s existing infrastructures in the offshore energy and advanced manufacturing sectors have positioned the region to become a prime asset in another rapidly growing and increasingly important industry: wind power.

National industry forecasts predict that wind energy in the U.S. will grow from 30 megawatts in 2020 to 20 gigawatts by 2035, resulting in $70 billion in new capital investments and approximately 45,000 new jobs. Considering Louisiana’s geographical advantages and thriving marine infrastructure, there is perhaps no greater place for much of this development to occur, and both government officials and public and private stakeholders are mobilizing to ensure that the region’s potential is maximized.

In November 2020, Governor John Bel Edwards formally requested that the Bureau of Ocean Energy Management (BOEM) form a task force across federal, state and local levels of government to harness the Gulf of Mexico’s strengths and to chart a course for developing the offshore wind sector in Louisiana. Many of the existing anchors that will play a key role in achieving this are already located within Greater New Orleans, which could further centralize the region as a hub of innovation and advancement.

At the NASA facility in Michoud is LM Wind Power’s Technology Center Americas (TCA), which has established itself as one of the most reliable and trusted manufacturers of wind turbine blades worldwide. In fact, one in five wind turbines globally are outfitted with LM’s blades, some spanning 107 meters—roughly the equivalent of the Saints pitch, post-to-post.

“Wind power is a clean, abundant, reliable and affordable form of renewable energy,” says James Martin, TCA Director. “Our team in New Orleans has designed and developed the world’s most innovative and powerful rotors in the world and have helped lower the cost of wind power to the point where it can compete with traditional forms of power generation.”

In addition to the manufacturing expertise offered by LM Wind Power, the prominent maritime and port industries in Greater New Orleans stand to further extend the region’s capabilities to export materials for offshore wind projects along the U.S. eastern seaboard.

Virginia-based company T. Parker Host is currently overseeing the redevelopment of Avondale Marine, a global logistics hub in Jefferson Parish where the convergence of rail, road and river will help to facilitate the global supply chain of offshore wind assets. There is no shortage of expertise there, too, as Jeff Keever, Host’s Government Affairs Representative, has spent several years overseeing offshore wind development and building an adjacent workforce in Virginia.

With the favorable alignment of all these circumstances and experts, Brad Lambert, Deputy Secretary at Louisiana Economic Development (LED), says wind power could soon bring an economic boon to the region.

“The energy market seems to be organically pulling several of the renewable energy options along, and Louisiana is well-positioned to capitalize on opportunities,” Lambert says. “Studies have shown offshore wind has the potential to produce considerable amounts of renewable energy and provide extensive economic development benefits. For instance, a single 600-megawatt wind farm in the Gulf of Mexico would produce an estimated 4,400 jobs and $445 million in economic output during the construction phase, based upon modeling by the U.S. Department of Energy’s National Renewable Energy Laboratory.”

While the task force requested by Gov. Edwards would only include elected officials and federal and state agency representatives, GNO, Inc. has formed a complementary entity to engage private and public stakeholders who are committed to capturing the maximum economic impact from the burgeoning U.S. offshore wind industry in coastal Louisiana.

Anthony Bodin, Director of Business Development at GNO, Inc., says jobs and investment related to offshore wind will materialize twofold: externally, by attracting offshore wind manufacturers and marine service companies who will expand the region’s export capabilities; and internally, by creating a local supply chain that both assists BOEM in issuing wind leases in the Gulf and develops
a specialized workforce. The GNOwind Alliance will accordingly focus on both avenues.

“Our aim with the GNOwind Alliance is to really understand what the workforce needs are going to be in the future and to be proactive about fulfilling those needs,” Bodin says. “By facilitating clear coordination between all involved entities, we can foster a conducive business climate for the offshore wind industry and promote greater industry awareness of the major advantages coastal Louisiana provides.”

Bodin says that because the region is already equipped with skilled maritime workers and valuable real estate, there is perhaps no better place for advancements in offshore wind energy to take place.

“We should be the first region to really develop that workforce. There will be a lot of transferable skills between what the offshore wind sector needs and what the offshore gas sector currently needs and has needed,” Bodin says. “This is a primarily marine industry, and there are very few regions that have the capabilities and expertise that we do, and there are few ports that have that much available land as we do here.”

If it sounds like the stars are aligning, it’s because they are, and the results could mean not only a more resilient and protected environment, but also an increased pool of opportunity for workers in Greater New Orleans to find high-paying jobs in a sector that is quickly building momentum.

“We have a unique opportunity in New Orleans to take advantage of a world class manufacturing and technology facility, located at the heart of a city that is fast becoming a technology hub,” says James Martin. “This, combined with the logistics and staging opportunities presented by the Mississippi River, means that New Orleans could be the nucleus of the wind power industry that can bring sustainable growth for years to come.” 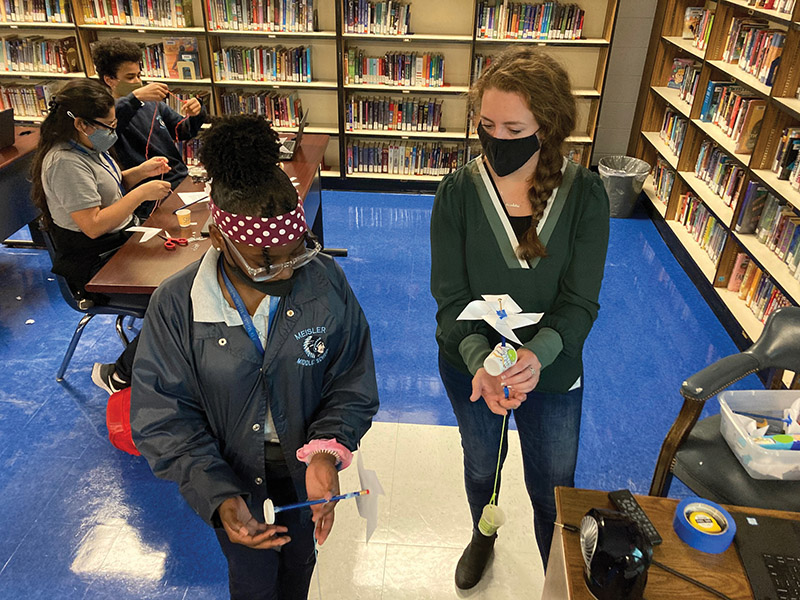 Students in Greater New Orleans learn about wind power with a hands-on activity. 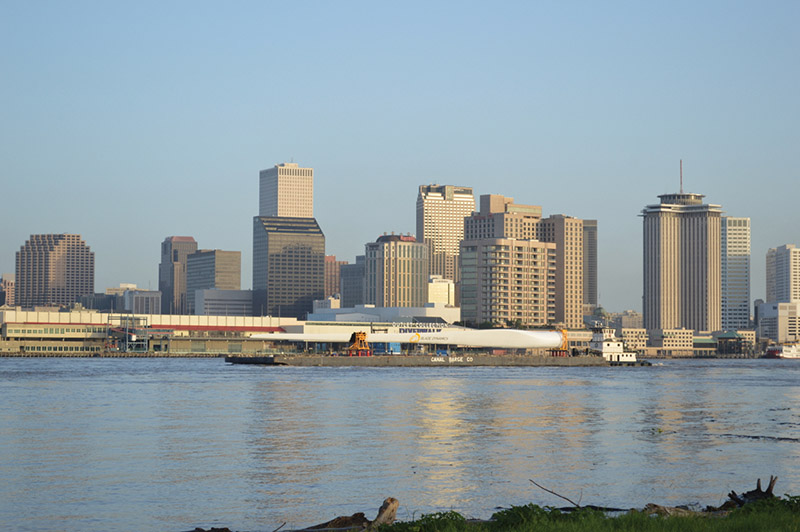 An LM Wind Power turbine blade is transported to its next destination.