New Orleans’ culinary scene draws on many influences, but barbecue isn’t one of them. Just a handful of local restaurants satisfy locals’ cravings for smoked and grilled meat. But now an unlikely chef, Demietriek Scott, is raising barbecue’s profile in the Crescent City with a restaurant and his own line of products.

The restaurant industry has been a labor of love for Scott, who has overcome a lifetime of obstacles to achieve success as a restaurateur in New Orleans.

“I have always understood being an entrepreneur,” Scott said. “I knew that from my days of being in the streets. I always knew that I had a knack to push a product, to sell a product.”

“The first thing I learned how to cook to make money was drugs,” Scott said.

As a young man, Scott “grew up all over” New Orleans. He began selling drugs as a 14-year-old while in high school.

Scott displayed business savvy at a young age, applying the lessons he learned in civics class to his illegal street enterprises.

“I was simultaneously at John F. Kennedy [High School] taking my civics classes, which were teaching me about bartering, teaching me about supply and demand,” Scott said. “Well, I’ve got supply; it’s in demand.”

Eventually Scott’s criminal activity caught up with him, and he was arrested during his senior year of high school selling drugs on the corner of Bayou Road and Claiborne Avenue. He was incarcerated for a year and a half.

While serving his time at Dixon Correctional Institute, Scott completed his General Education Diploma, picked up boxing and served as prison cook.

“I took my lick, sat down, did what I had to do,” he said. “Then i thought about what I wanted to do with my life.”

When Scott was released from prison on January 16, 1996, he vowed to change his ways and never return to life behind bars.

“I looked at the front doors of Dixon Correctional Institute, and I said, ‘I ain’t never coming back,’ and I ain’t never been back.”

As a teenager, Scott envisioned working with food during his life, even if he was unaware of what a chef actually did.

“I decided that I wanted everybody in the world to eat whatever it was I had,” Scott said. “The idea just kind of stuck right there.”

Scott began his culinary journey in the summer of 1996 when he enrolled in the Culinary Arts program at Delgado Community College.

“After I signed up for Delgado, I knew I was on a pathway,” Scott said.

While studying at Delgado, Scott began his apprenticeship at the Hotel Monteleone in the French Quarter, gaining valuable experience in one of New Orleans’ premier kitchens.

Following his graduation from Delgado in 2001, the aspiring chef worked as a line cook at Commander’s Palace and later at the Windsor Court Hotel. 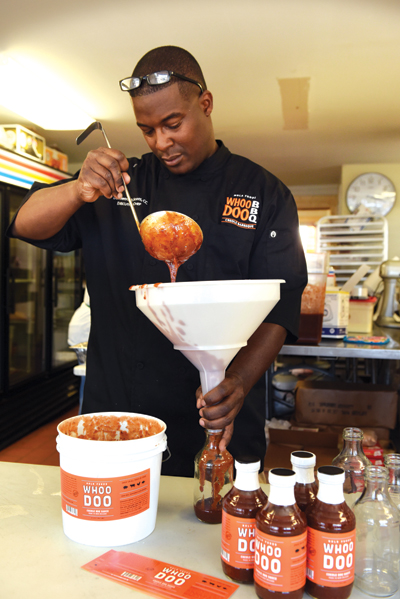 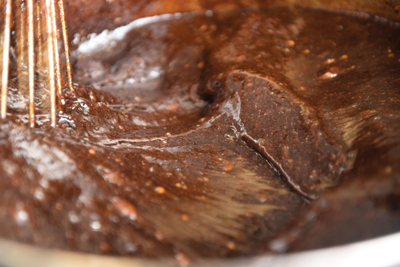 His culinary journey relocated him to Atlanta in 2004, where he worked in several kitchens before opening his own restaurant on two separate occasions.

His first restaurant attempt was New Orleans’ The People’s Restaurant, which served Cajun and Creole cuisine, but ultimately a poor choice of location would doom the restaurant.

“When I started to fully understand that I was sinking in my first restaurant, I decided, ‘Let me get out of this thing,’” Scott said. “Let me go back to work, try to understand what I’m supposed to doing as a cook and a chef and an entrepreneur all over again.”

“I understood the business a lot better within that two-year span,” Scott said. “I made a profit my first year, which is unheard of.”

In fact, Da Cajun Kitchen made a $20,000 profit off a $1,500 investment in its first year, but ultimately could not sustain its early success.

Most importantly for Scott, his early success with Da Cajun Kitchen gave him the confidence that he could succeed in the restaurant business.

“I realized that I was able to push a product, make it taste good and make people realize that I could deliver something great.”

When Da Cajun Kitchen closed its doors, Scott began working offshore in 2011. Taking the skills he had acquired during his time in Georgia, he began to experiment with smoking meat aboard rigs in the Gulf of Mexico, feeding his co-workers and drawing rave reviews.

By the end of 2011, Scott decided to get serious about barbecue; Armed with a truck and grill, he began NOLA Foods in September 2011, and subsequently opened the NOLA Foods Café in Treme.

During the Voodoo Music Festival in October 2011, he faced his busiest weekend ever, making over $5,000 while using a grill no bigger than a legal pad.

“I worked that little-bitty $10 grill that I got from Walmart,” Scott said. “The crowd was thick as peanut butter, and I was onto something.”

“I realized that I was able to push a product, make it taste good and make people realize that I could deliver something great.”

Scott faced another setback late in the summer of 2012 when Hurricane Isaac collapsed the ceiling in the kitchen of the NOLA Foods Café.

“At the time, business was just starting to pick up, but not enough to where I could maintain my business insurance,” Scott said. “I was forced out of the building because of the storm and the damages.”

Ever the optimist, Scott vowed to open another restaurant.

“I had proven to myself that I could actually build a business, make it profitable and make it go on.”

The Birth of the Ghetto Burger

As Mardi Gras 2013 approached, Scott knew he needed to capitalize on the city’s premier event.

Suffering from a severe case of tonsillitis, he set up shop under the bridge at St. Charles Avenue and Calliope Street and unleashed the newest weapon in his street food arsenal: the Original Ghetto Burger, a 12-ounce handmade patty oozing with flavor.

The Ghetto Burger was inspired by the homemade hamburgers Scott enjoyed as a kid, when his family could not afford to purchase burgers at local fast food chains.

“We used to make a burger in the ghetto, which was the projects, at the beginning of the month,” Scott said. “My mom would get her food stamps, and make her own burgers.”

The catchy name conjured up memories for many parade-goers and caused passers-by to stop and inquire about it. The Ghetto Burger was an instant hit.

“That was actually something that was familiar to everybody,” Scott said. “Everybody’s mom made a hamburger by hand, out of fresh ground beef at home.”

The Genesis of Whoodoo BBQ

t began experimenting with creating barbecue sauce as a young cook in the late 1990s. Initially he purchased sauces from local grocery stores and added his own blend of spices to create a homemade sauce for the street food he sold. Over the years, many customers asked where to buy the delicious concoction that smothered his meats, and finally Scott decided to craft his own signature sauce.

Scott’s original sauce was initially called Chef Scott’s BBQ Sauce, but he realized he needed to refresh his brand to stand out.

Scott was inspired by the name of a mystical power his mother often referenced in regards to relationships.

“She had always used a saying that women would date men and either put a spell them or use some type of hoodoo or voodoo to make them always come back and see them,” Scott said. 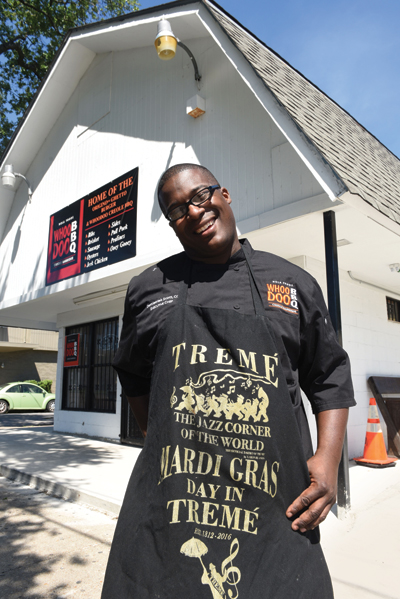 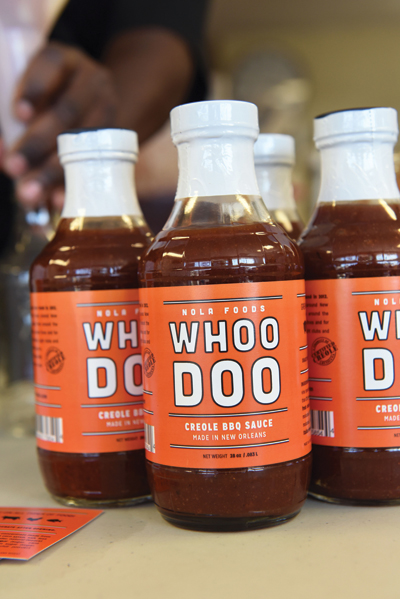 Scott’s Whoodoo BBQ sauce, a spicy tomato-based product, was the first of his three signature sauces. Fiya Water, a Caribbean-based flavor with pineapple and mango infusions and Beer Bee-Q, a sauce made with NOLA Brewing beer, followed shortly thereafter.

The barbecue sauce trifecta has helped form the basis of the product line featured at his latest restaurant, Whoodoo BBQ.

“It was going to be a certain style of barbecue,” Scott said. “It needed to be something synonymous with what this side of Louisiana was familiar with, and that was Creole, tomatoes and things of that nature.”

Located seven blocks from the site of NOLA Foods Cafe, Whoodoo BBQ is Scott’s ode to Creole heritage, specifically his great-great-great grandmother, who was a Creole slave.

Scott’s BBQ sauces and desserts, which include “ooey gooey” cakes, pies and pralines, already line the shelves of area Whole Foods Markets and Rouses, but to Scott that’s only the beginning.

His vision for Whoodoo BBQ includes turning the current location into an exciting restaurant experience that combines his delicious food, a full bar and live music.

In the future, Scott plans on expanding the NOLA Foods brand (which includes Whoodoo BBQ) into a national, and hopefully international, New Orleans brand that will “stand the test of time.”

“This brand is going to be built right here in New Orleans,” Scott said. “Same as Zatarain’s, same as Tony Chachere’s, CC’s Coffee, PJ’s. We want to appeal to that local New Orleans brand, with nothing but hard work, dedication and the love that’s in my heart from being able to grow up here in New Orleans.”

Eventually, Scott also expects to move beyond barbecue, and open up other types of restaurants
.
“I want to be able to show and share what I’ve learned in all these culinary kitchens from Atlanta to New Orleans,” Scott said.

He also eventually wants to return to where his culinary journey began and open up a restaurant in the French Quarter.

“I want to be the black guy that worked his ass off and made his own money, whether somebody wanted to invest in me or not.”