While Marking its 10th Anniversary, Launch Pad Makes Plans for the Future

NEW ORLEANS – On any given day, Launch Pad entrepreneurs are bustling through the Poydras Street coworking space, brainstorming ideas. But last week, on May 2, there was even more excitement and energy in the air than usual. Launch Pad celebrated its 10th anniversary with more than 120 guests, including current Launch Pad members, graduates, and Mayor LaToya Cantrell.

“It was pretty inspirational to have so many people come back and express their gratitude for the impact that Launch Pad has had on their businesses,” said Chris Schultz, the founder and chief executive officer of Launch Pad.

The coworking space opened in the spring of 2009, when local residents and professionals were finally getting back on their feet, following the devastation caused by Hurricane Katrina.

At the time, Launch Pad was one of the first coworking spaces in the country, and the first in the city, said Schultz. Now it's one of many.

“Our focus has always been meeting the needs of our community, and supporting the businesses and the careers of the people working at Launch Pad,” he said. “It's a lot more than just desks and chairs and offices. It truly is a community.”

Launch Pad offers memberships for three different product levels: coworking desks, permanent desks, and offices. The members include small businesses and startups, along with freelancers, remote workers, and even lawyers and accountants.

“We offer a variety of flexible options to entrepreneurs who are notoriously challenged in terms of their budget needs, and a whole host of options in terms of the types of products and services they can get from us,” said Anne Driscoll, the president and chief operating officer of Launch Pad, noting that Launch Pad’s membership price points range from $200 to more than $1,000 a month. 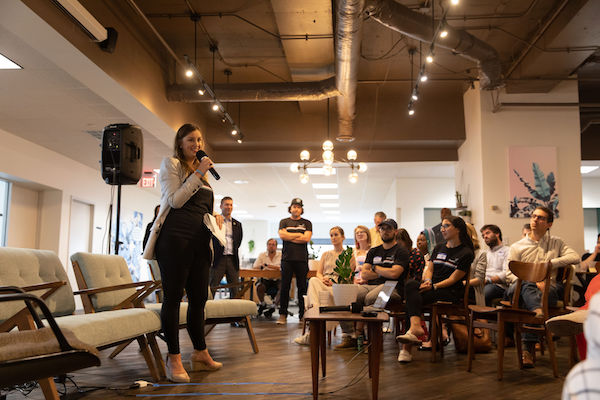 Driscoll said they work one-on-one with members by connecting them to mentorship and educational programs, so that the members can eventually raise funding for themselves or build a relationship with a corporation. They invest in certain companies and help them obtain their first round of capital.

The entrepreneurs within Launch Pad also help one another, support each other's success, and ultimately make a difference in each other's lives.

“We’re very proud of the impact that we've had on the New Orleans entrepreneurial ecosystem,” said Schultz. “Since our founding, companies working at Launch Pad have created 5,000 jobs in New Orleans. They've raised $160 million dollars in venture capital, and they've graduated into other commercial real estate in New Orleans, totaling 600,000 square feet. So if you can envision that, that's on the order of magnitude of what a big company being recruited to New Orleans would have.”

Schultz is now eyeing a nationwide expansion. He has already opened coworking spaces in Nashville, Memphis, and Newark, New Jersey; and he has plans for spaces in more than 20 additional cities. He’s hoping those plans will come to fruition within the next two years.