It’s definitely now in Metairie, with the opening of the Metro’s first Beef Jerky Outlet.

“I've had at least a few people walk in and tell me they saw the sign from the road and were so excited they almost caused an accident,” says Bonnie Armstrong, co-owner of Beef Jerky Outlet, which had its soft opening April 27 on Veterans Boulevard near Lakeside Mall and its grand opening June 10.

A celebration of all things jerky, Beef Jerky Outlet is the first beef jerky franchise in the U.S. Founded in 2010, the company is headquartered in Kodak, Tennessee, and, as of early June includes 100 franchises spread across the country with another 102 listed as “coming soon.”

Metairie’s Beef Jerky Outlet brings the company’s presence in Louisiana to four stores, joining outlets in Bossier City, Gonzales and Monroe. For Armstrong and her husband, Jason, New Orleans natives who reside in Metairie, the franchise ticked all their boxes.

“Jason has worked as a district office manager at Analytic Stress for over 14 years and I worked for about 9 years in a pediatric dentist’s office before becoming a stay-at-home mom with our 2-year-old son,” Armstrong says. “We’ve always wanted to go into business for ourselves and about two years ago started looking into different franchise opportunities.”

The search ended not long after Armstrong says she saw a Fox News segment about the company and was intrigued. “I called the company and started asking questions,” she says. “We both love jerky and we wanted something that would allow us to give back to the community. This was it.”

Armstrong says the company’s reputation was definitely a factor in their decision, citing that Beef Jerky Outlet recently grabbed the No. 72 spot in Entrepreneur Magazine’s 2017 Franchise 500.

“They’ve helped us every step of the way,” she says, noting that the buildout of her store took only a few days. “They have this down.”

Taste All You Want

The main thing that sets Beef Jerky Outlet apart from buying jerky anywhere else is the astounding variety of products. With over 100 varieties of jerky, the goal is to have something for every palate, from sweet, to smoky, to jerky with a little something extra, like the company’s Bootlegger series — jerky infused with alcohol to create flavors like bloody mary, moonshine and bourbon.

There’s also certain flavors that sell better in some markets than others. “Crawfish is definitely one of our top sellers,” Armstrong adds.

Then there are those palates that are looking for a bit of punishment. For them, Beef Jerky Outlet offers The Reaper jerky.

“It’s super hot,” says Armstrong. “To give you an idea, a bell pepper is rated at 200 Scoville units. The Reaper rates at 2 million.”

There’s no need for Armstrong to explain the taste of a product inside the store, however, as all shoppers are invited to taste all they want via samples housed on the top of wooden barrels positioned around the store.

“This is a high quality product,” says Armstrong, who has visited the company’s meat distributor in Tennessee but has yet to make it to the other one in Michigan. “We know that once people taste it, they’ll like it.”

The snack industry in the U.S. is a $120 billion industry and growing, and beef snacks are the fastest growing snack category. According to market research firm IRI, from 2009 to 2015 sales of beef jerky increased 46 percent, with Americans purchasing $2.8 billion worth of the savory snack in 2015 alone.

In 2015, Hershey purchased the only company in its history that doesn’t sell sweets, buying up the meat snack brand Krave for $300 million. In the next year, sales for the company rose 71 percent to $38.3 million.

Why the surge? One easy place to look is the rise in the paleo diet, which encourages people to eat as early humans did — no grains, mainly meat and vegetables.

“All our jerky is made in the USA and gluten-free, except for the terikayi flavor,” says Armstrong.

The high protein snack is also low in calories and fat. Add that to the fact that it’s extremely portable — easy to throw in a purse or backpack and keeps well after opening for three days, lasting another week or two in the fridge — and you have a diet-conscious snack for people on the go.

Armstrong says she’s been surprised at the range of shoppers that have already come through her door. 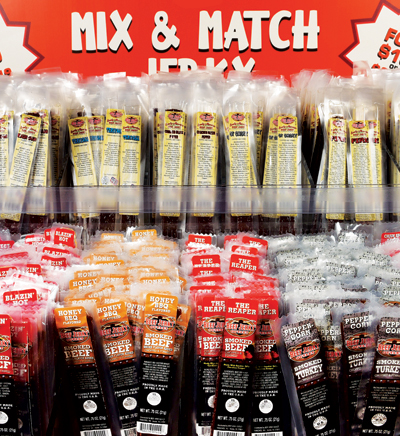 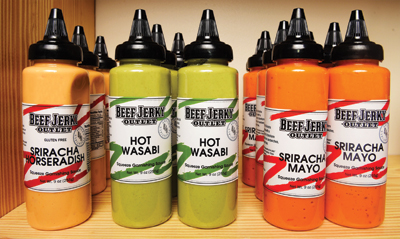 “This is such a great location,” Armstrong says. “The Trader Joe’s staff loves us, and we also have employees coming in from Party City and Mellow Mushroom, and then of course there’s the new Triumph Krav Maga workout place.”

“We’d like to eventually have three locations: one on the Northshore, one in Slidell and maybe one in Elmwood,” she says.

The Wildest of the Bunch

Every franchise owner likes to think that their location is special, but in the case of the Metairie Beef Jerky Outlet, it is breaking company ground.

In addition to a toddler, the Armstrongs also have a 22-year-old son who has Autism. Bonnie is on the board at Magnolia Community Services for special needs.

“It’s an organization that is near and dear to our hearts so I’m excited at the opportunity we will have through the store to give to them,” she says. At the store’s grand opening a portion of the proceeds went to Magnolia.

Sitting prominently by the register is another way for customers to give back by buying jerky for American servicemen and women.

“People can donate whatever they would like and when we have enough for a bag of jerky we add it to the collection,” she says. “They can also just buy a bag to donate. It’s a nice way to do something kind for our troops.”

That phrase is written across one of Beef Jerky Outlets t-shirts, for sale at the back of the store.

“People really like the funny shirts,” Armstrong says. “If someone spends $100, they get a free t-shirt and get to ring the cowbell.”

In addition to every kind of flavor of jerky, Beef Jerky Outlet has a wide variety of other products. For the do-it-yourselfers, the store offers grow your own pepper plants and kits to help you make your own jerky. There’s also gourmet popcorn and peanuts, various pickled products and jellies, as well as granola, dried fruit, wasabi peas and pork rinds. 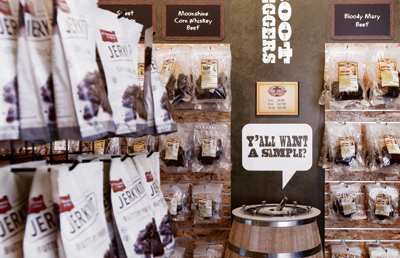 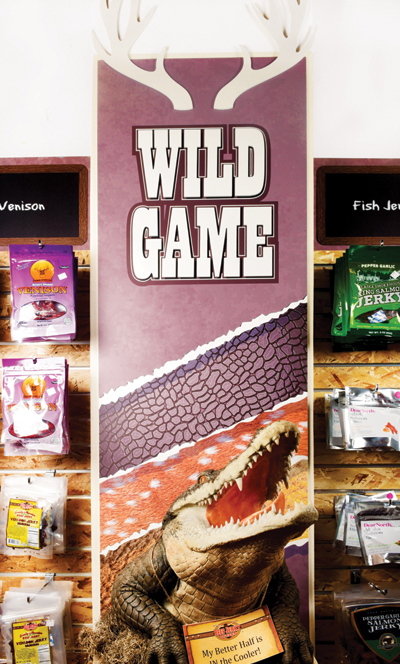 (Left) Sample bins abound at the store, encouraging customers to try the store’s more than 100 varieties of jerky. (Right) Metairie’s Beef Jerky Outlet is one of 100 franchises currently operating around the country. It is the first to feature the company’s wild game offerings.

For the more adventurous, there’s also a collection of spiced worms, crickets and scorpions.

“I haven’t done it yet,” says Armstrong when asked if she’s tried the crickets. “Customers can spin our wheel up at the front for the chance to win a prize, and one of the sections is ‘eat a cricket’ so I’ve definitely seen people do it, but I’ve been avoiding it so far.”

She says she’ll happily eat the hottest of the peppers, but insects are something else.

“I know I won’t be able to avoid it forever,” she adds. “I’ve heard they taste like burnt sunflower seeds.”

Jerky has traditionally been the No. 1 favorite snack of the military, and since 1996 NASA has sent it into space with astronauts.

The word jerky came from the Quechua word charqui, which means “to burn (meat).” This South American tribe — part of the Incan empire — invented the food around 1550.

It takes 3 pounds of meat to make 1 pound of jerky.

Week in Review, July 19-23: Caesars Superdome, Masks Are Back, No Veto Override

Felipe’s Invested in Me; More Businesses Should Do the Same

MSY Ranks No. 3 on 'USA Today' List of Top Airports