In the midst of a worldwide panic over disappearing bees, Biz New Orleans takes a look at their status locally and what these insects mean for the state’s economy.

For years now, we’ve been hearing the grim news: The bees are disappearing and we’re all in trouble.

Worldwide, the alarm has been sounded, but what does it mean for Louisiana? Are we seeing a decline here in the state whose official state insect is the honeybee? Other than taking care to avoid the backside of this buzzing creature, why should we care so much about a threat to their survival?

First, let’s look at why there’s been such a global concern. More than just an insect that happens to make a tasty treat, the approximately 20,000 different bee species around the world are an integral part of the world’s food chain, responsible for pollinating about one-third of all the food we eat — including fruits, vegetables, nuts, coffee, chocolate and various herbs and spices. Without them, we would lose a significant amount of our food supply.

But what does that mean specifically for economics in Louisiana? While some of our main agricultural staples, including sugarcane, rice and cotton, are pollinated by the wind, not insects, according to the 2014 agricultural summary report from Louisiana State University’s Ag department, fruit production in the state totaled $36.5 million, and vegetable production totaled $377.5 million.

That over $400 million does not account for many micro farmers in the state, whose crops are not reported. Add to that the 1.7 million pounds of honey produced in Louisiana in the same year at an average price per pound of $1.80 to $2.20, which totals an additional up to $3.74 million.

So are we seeing a change in the bees that should worry us? The answer is not clear.

“It really depends on who you talk to,” says Bob Danka, research leader at the Honey Bee Breeding, Genetics and Physiology Research Unit in Baton Rouge. In operation since 1928, it is one of three USDA labs around the country that work with honey bees.

“What you’ve heard about a decrease in the global population of bees is wrong,” he says. “The only place where there was a decrease was in North America and Europe, where, over the years we’ve gone from about 6 million colonies down to about 2.5. But as a society our needs have changed too. We don’t need that many bees.”

While he may not believe there’s reason to panic, Danka does acknowledge that the work involved in being a successful beekeeper, both worldwide and in Louisiana, has gotten more and more difficult in recent years.

“The world has gotten smaller, and as such we’re seeing more and more problems with exotic pests,” he says.

When Danka joined the research unit 30 years ago, the main threat gathering attention was that of the Africanized honey bee. Since then, he says, the bees have been facing “one biological problem after another,” with one of the biggest being Varroa mites.

Discovered in the U.S. in 1987, these mites hail from southeast Asia and are large enough to be viewed with the naked eye and are described as looking similar to a tick. Like a mosquito, or a tick, the mites transmit viruses and other pathogens to the bees. Colonies infested with these mites typically die in 1 to 2 years.

“Varroa mites have been found all over the world, except Australia,” Danka says.

The answer to the mites became to use pesticides, a practice still in use today, but it is one he says definitely comes with risks. 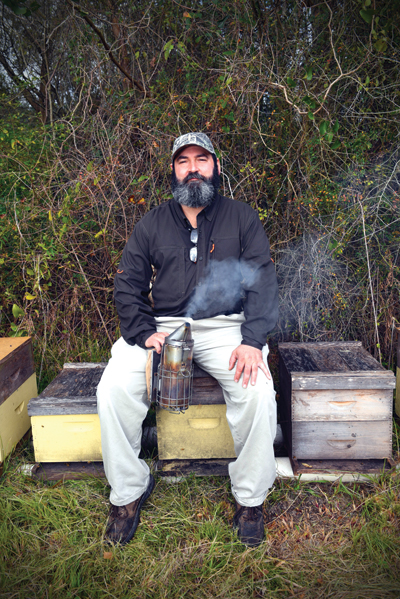 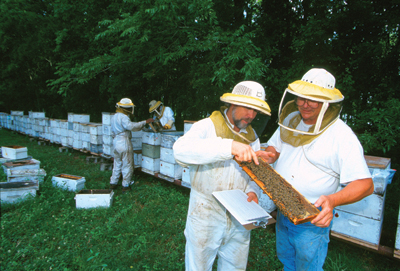 “When you use pesticides you are risking contaminating both the honey and the hive,” he says. “And then there’s the fact that mites are the classic poster child for developing resistance.”

Determined to find another way to deal with the mites, the Honey Bee Unit began importing Russian Honey Bees, a species that has been found to be resistant to Varroa mites, in 1997. The bees were bred to create several lines and then turned over to the Russian Bee Breeders Association to be made available to beekeepers.

The lab has also developed bees with a certain genetic trait called Varroa-sensitive hygiene (VSH). Bees with this trait are able to take care of the problem themselves — finding them on their own and tossing them out of the hive.

With the Varroa mite issue addressed, the lab has switched focus to other pathogens causing problems for honey bees, including Deformed Wing Virus, Nosema Ceranae and tracheal mites.

While mites and pathogens are certainly a viable threat to bees, human actions are definitely taking their toll.

“The last six or seven years we’ve been hearing a lot about Colony Collapse Disorder (a phenomenon where the majority of worker bees leave, causing it to collapse), and my take on things is that it has a lot to do with all the chemicals we’re using on our agriculture,” says New Orleans bee removal specialist and beekeeper Jeff Armstrong, a.k.a. “JP the Bee Man.” “I have a beekeeper friend down in Mississippi who was seeing some of the classic symptoms and in the four days I was visiting him I saw two planes and a helicopter drop chemicals around him.”

On this problem, however, Danka says Louisiana is fortunate.

“We are generally less affected by the pesticide problem locally because we don’t have a really heavy corn and soybean matrix,” he says. “We also still have a fair amount of wild land here in comparison with many other states.”

Beekeepers Elizabeth Holloway and Milou Barry, proprietors of Bocage Bee and Honey Co. in Baton Rouge, however, say chemicals are among their top concerns.

“In my book, public enemy No. 1 is Round Up,” says Barry. “Whenever we go and speak to a garden club I tell them that if they want to do one thing for the bees they need to get rid of that stuff safely and never use it again. You can use it in your yard and it’s strong enough to kill the garden of the yard next to you. It’s responsible for killing tons of bees each year.”

Speculation also exists that Colony Collapse Disorder could be caused in part by a group of chemicals called neonicotinoids, neuro-active insecticides. 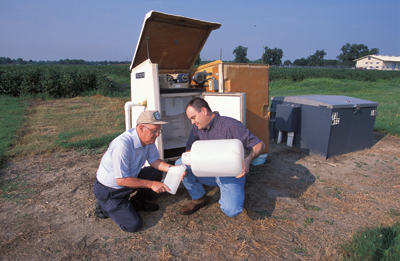 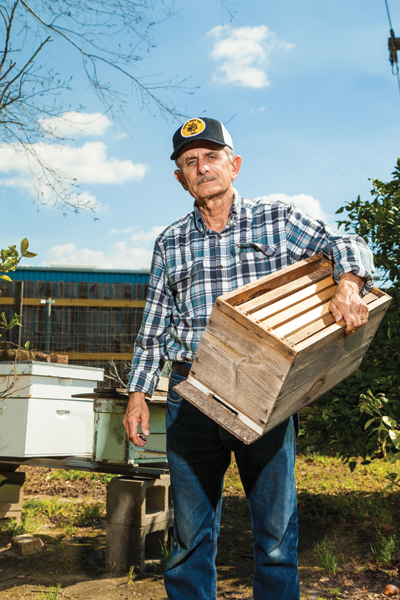 LEFT: The Baton Rouge lab is one of three USDA labs in the country focused on honey bees. RIGHT: Glenn Gueho, owner of Busy Bee removal services and a beekeeper, says demand for his services has doubled in the past five years thanks to higher temperatures. Photos Jeff Johnston

“Dell, Monsanto, Bayer — they all use them and they do real damage,” Holloway says. “Basically bees have a kind of built in GPS system that enables them to triangulate to the sun and find their way home. This chemical interrupts that system and the bees get lost. The EU banned it and Mexico sued against its use and won, but we still use it. Right now stores like Lowes and Home Depot are not selling it, but nobody knows how long that will last.”

Holloway says that with the recent spread of the Zika Virus, she worries that there will be more aggressive spraying for mosquitos this year and is concerned about how it will affect the bees.

“We had tremendous losses with the West Nile Virus,” she says.

Like with everything in agriculture, weather is everything, and again, in this factor Louisiana is very bee friendly.

“Winters are mild here so we have a high instance of survivability,” says Armstrong. “The honey bees here are thriving.”
For Holloway and Barry, who specialize in varietal honeys, weather rules their business.

“The color and flavor of honey is completely dependent on what the bees eat, so in order to offer different varieties we currently have hives in about eight locations scattered around Baton Rouge,” Barry says. “It’s like with wine, the difference in soil and in season greatly affects each crop. We’ve had as many as 35 varieties in a year.”

Last spring Bocage Bee and Honey Co. was unable to offer their wild orange honey. “That’s when we got all those heavy rains and all the pollen and nectar were just washed away,” Holloway explains.

For Glenn Gueho, owner of Busy Bee bee removal services and a beekeeper, rising temperatures are good for business.

“With global warming we’ve seen higher temperatures over the years and that means bees look more and more to get out of the heat — searching out homes and businesses with air conditioning and shade,” he says. “This means I’m doing more and more removals. In the last five years my numbers have actually doubled, from 500 or 600 a year to over 1,000.”

And Now for the Good News

The doomsday scenario regarding bee declines hasn’t been witnessed here in Louisiana, in fact, all the worldwide focus has had a surprisingly positive affect. The 2014 LSU Ag Summary found a sharp increase in the number of beekeepers — from 325 in 2013 to 446 in 2014.

This number doesn’t take into account backyard hobbyists, whose numbers are definitely on the rise.

“There’s a lot of people who’ve read about the problems and they’re looking for a way to help,” Danka says.

“The more you learn about bees, the more you can’t help but become enamored,” Armstrong says. “Working with bees is almost spiritual. When you’re in their world you have to be in it 100 percent. It’s such a great escape.” 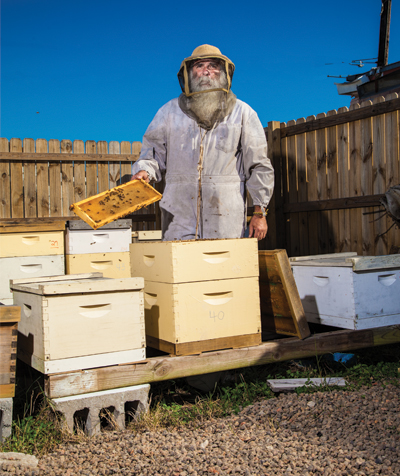 TOP: Bocage Honey Co. in Baton Rouge specializes in varietal honeys, producing as many as 35 varieties in a year. Photo Courtesy of Bocage Bee and Honey Co. BOTTOM: Operating out of 30 blighted properties in the Lower Ninth Ward, Capstone, a nonprofit run by beekeeper David Young, gave away over 2,600 pounds of honey last year to local residents.

“It gives you a whole different perspective on life — on communal living,” Holloway says. “I get emotional when I talk about bees. They’re just so incredible.”

“I came here after the storm to help with rebuilding, but pretty soon I saw that the Lower Ninth Ward needed more than just housing,” he says. Young began buying up blighted lots in the area and using them for bees and gardens. His organization, Capstone, now has 30 lots and gave away over 2,600 pounds of honey last year. All of the produce grown was also distributed to local residents.

“All of the increased interest we’ve seen in recent years is just wonderful,” says Holloway. “The housewife with two hives in her yard, the little old man with one hive — it’s making a difference.”

•  Honey bees are not native to the U.S.; Approximately 70 percent of the honey bees in Louisiana are Italian.

•  Honey bees can travel up to 5 miles to find food.

•  95 percent of a honey bee colony is female. Males, or drones, are solely used for breeding.
All nectar gathering is done by females.

•  Bees are deaf — they communicate through dance.

•  A queen typically lives for 3-5 years, while workers live for about 30 days.

•  Beekeepers deal in weight, not volume, due to the density of the product.
Honey that measures 12 ounces will typically weigh 16 ounces.