A look at the latest trends in architecture and design.

When it comes to architecture and design, New Orleans definitely has a style all its own that includes influences from the French, Creole and Spanish peacefully co-existing with modern and art deco designs. Sometimes these elements can be found in the same neighborhood, or even the same street, and yet somehow it all works.

“New Orleans has always lagged a little behind more progressive architectural cities in traditional terms, especially those cities along the East and West Coast,” says Ryan Gootee, president/CEO of Ryan Gootee General Contractors. “I think that has to do with the size of New Orleans, our laid-back culture and the tremendous amount of historic tax credit projects we’ve seen lately which don’t allow for much change. Since Hurricane Katrina, that design lag has closed a bit and more architects are bringing in more modern design elements, but some things are just non-starters. As an example, many of the materials seen in the West would not be conducive to our subtropical climate.”

“Current design trends are now celebrating raw materials and exposed elements such as concrete, brick, wood and steel,” says Wes Palmisano, owner of Palmisano. “Spaces are becoming less formal, favoring a casual, clean and elegant look. Retro looks from the ’50s and ’60s, for example, are popular again. The handcrafted organic feel of this era appeals to the younger, upcoming generation of millennials.”

“If by retro designs you mean the late ’60s to early ’90s, I would say we have seen some designers add some retro nuances to their overall design lately, but usually it isn’t the overriding concept,” Gootee adds.

According to Architect Magazine, material forecasts consider factors such as potential industry growth, economic impact and new discoveries to predict the best innovations for each year. The magazine notes that materials to watch include programmable cement, hardwood cross-laminated timber, solar-harvesting roads, power-generating textiles, and building-integrated bioreactors.”

Caroline Larussa, operations director at Modern Market, a furniture and design store in New Orleans, says that nationally the company is seeing a trend toward muted colors and/or lighter woods, mixed and assorted metals, as well as a heavy use of texture. “More and more of our manufacturers are increasing their efforts and products to be sustainably conscientious while promoting eco-manufacturing and the best shipping methods,” she says. “We make a huge effort to vet our manufacturers based on these stipulations as well.”

According to Simcha Ward, architect and project manager with Wisznia Architecture and Development, another trend prevalent in New Orleans is the use of design to bring people together.

“One trend that we are seeing continue to gain momentum globally, as well as in New Orleans, is toward architecture and design features that encourage social interaction amongst people from different backgrounds,” Ward says. “This trend can be observed locally in the explosion of communal tables at our favorite coffee shops and restaurants, as well as in the proliferation of co-working spaces throughout New Orleans.”

Ward adds that at the company’s upcoming Two Saints development, they have been intentional about introducing design features that facilitate incidental interaction amongst residents. “One innovative feature is a handicap accessible ramp that winds its way through the building, connecting residences with amenities and providing additional opportunities for residents to have serendipitous social interactions,” Ward says.

“Eco-friendly designs and materials are more important than ever to design and construction today,” says Palmisano. “Ten years ago, eco-friendly was cutting edge and viewed as an ‘upgrade’ to the building, while today eco-friendly is a given and generally a requirement for all owners.”

“For instance, LED light fixtures would now be considered the rule and not the exception,” Gootee says. “Because of the high demand of LED fixtures, the supply over the last few years has caught up to the point where a project can more easily afford them.”

In addition to materials and design palettes, there are other things to take into consideration when planning and designing a building project.

“Buyers are savvier now and are looking at locations and use of spaces – the best use of a space for their needs,” says Sarah Martzolf of The Martzolf Group. Launched earlier this year by three realtors, The Martzolf Group offers services including luxury real estate, development and interior design. 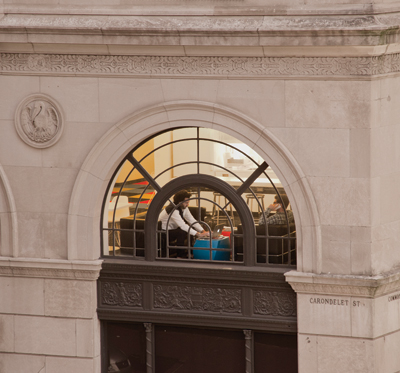 “Buyers understand it is important to have quality materials and unique and timeless items,” Martzolf says. “The idea is to keep an open floor plan and make it timeless and beautiful.

She adds that the style of a space can also depend on the neighborhood. We have a good mixture of coastal traditional mixed with historic styles scattered throughout the area.”

Byron Mouton is senior professor of practice at Tulane and director of Tulane’s URBANbuild program. He is also a principal at Bild Design.

“I’ve been teaching since 1998 and started Bild Design in 1999,” Mouton says. “It’s always worked as complementary studio to what I was doing at Tulane. We focus on designing and building homes around the city. Design/build services are proving appealing to residential clients these days. It allows us to stretch their dollar a bit.”

Mouton says the goal of his practice and school program is to introduce to New Orleans a sense of progress.

“The projects we do are contemporary but with a nod to the past,” he says. “We respect our older buildings but don’t necessarily replicate them.”

Mouton says that mixing the old and the new allows his firm to capitalize on the strengths of both.

“For instance, when it comes to keeping homes cool, we’ve got all the advancements we can use — windows are better made now, insulation is better, cooling systems are more efficient and roofing is more efficient,” he says. “But we also pull in the old techniques, like using overhangs and shaded porches, and looking at the placement of trees, and raising homes off the ground to take advantage of air flow.”

Some designers have been working technology into their designs in response to client demand, from alarm systems to a fully programmable “smart house” that responds to voice demands.

“Integrating technology into a project depends on the size and complexity of the project, design and contractor,” says Gootee. “We use software in every aspect of our business to ensure the entire project process is tracked and managed properly. We can’t get enough and are always looking to improve and upgrade on the technology we have in place. As with every industry, if you are not proactively managing your technology, you will most likely fall behind.”

When working on a construction or design project all the ideas in the world cannot become a reality unless you have the right people in place to execute the work and make it a reality.

“Successful projects cannot happen without successful people running them. You have to recruit people who are either already proven in the industry or show a high level of engagement to succeed,” Gootee said. “Once they are onboard, you must provide them every opportunity to elevate themselves through training and education. When your employees know you are willing to invest in them and give them a chance to succeed, turnover and retention issues will significantly diminish and projects will be streamlined.”

“Communication and trust are key to a successful project,” said Larussa. “We believe a successful project happens when the architect, contractor, and interior designer are all on the same page during the entirety of the project. Teamwork makes the dream work.”