NCIS New Orleans and a unique historic collection have the center hopping. 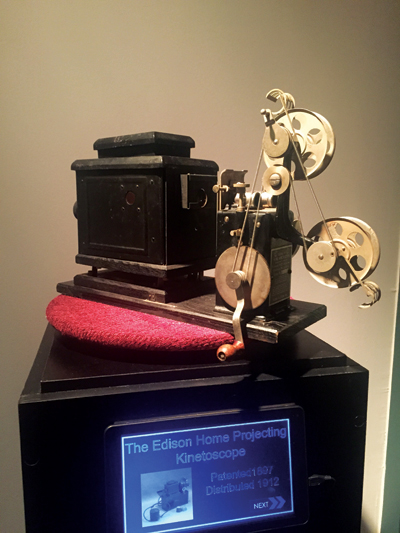 Tucked away in the industrial area of Harahan is a 100,000-square-foot facility called the UNO Nims Center New Orleans.
Monday through Friday, the center is bustling with activity as it plays home to the third season of CBS’ hit series NCIS New Orleans. Inside you’ll find perfect replicas of a medical examiner’s offices, restaurant and New Orleans style residences. You’ll also find UNO students getting a hands-on introduction to Hollywood.

The for-credit, paid ($10 an hour) internship program with NCIS, Benischek says, is the result of the passion of Joseph Zolfo, the show’s producer. “He started in the business at the bottom of the bottom and always told himself that if he ever made it, he’d give back. He saw this as an opportunity to do just that.”

Interns on the show work in various departments, from art to camera to facilities to locations, averaging approximately 20 hours a week.

With four stages, 35 productions offices, plus post-production suites and screening rooms, conference rooms, showers, kitchens, washers-dryers and even a 40 seat HD executive screening room, the Nims Center — operated by the UNO Foundation and UNO — has been a popular filming location since it opened in 1999. In addition to TV movies, music videos and commercials, the center has hosted 30 feature films including award-winning projects “12 Years a Slave,” “Dallas Buyers Club,” “Ray,” “Beasts of The Southern Wild,” and “The Curious Case of Benjamin Button.”

“Benjamin Button took up the entire facility as their soundstage and costume area,” says Benischek, who notes that in the center’s early days sometimes three projects would be filming at a time.

In 2013, not too long after NCIS arrived for its first season, the Nims Center received another exciting addition, a collection of pre-cinema optical devices and parlor amusements from the estate of Robert Fleshman, former chair of the theatre department at Loyola University New Orleans.

“Robert spent over 40 years quietly collecting these items, that range from little toys and things that amused Victorian society to early projection devices from Thomas Edison and other inventions that led to the development of moving images,” Benischek says. “All in all it’s, I’d say, over 300 items, including about 150 to 200 actual devices, 15 or 20 of which were truly instrumental in the development of cinema.”

Interns on the Nims Center side have been hard at work on the collection for three years now — cleaning, sorting, locating missing parts, doing research and making sure the devices are actually functional.

Benischek says the ultimate goal from the beginning was to create a different sort of a museum.

“Instead of putting the items behind glass, we have them out in the open on pedestals that you can turn so you can see the entire piece easily,” Benischek says. “We’re also including digital tablets with each item that allow you to learn about each one and see how it contributed to the development of cinema.”

This past spring the first part of the Galleria of Pre-Cinemagraphic Optical Devices and 19th Century Parlor Amusements was completed and the center hosted a successful showing for Fleshman’s family.

“Eventually, when everything is completed, the idea is to open the collection up to public tours one or two times a month,” Benischek says. “With NCIS here, of course we’re very limited on parking so we’d have to figure all of that out but I think that can happen.”

Benischek says the Nims Center is a source of pride for UNO, and rightly so.

“No other film program that I know of operates like this,” he says. “To have this direct work opportunity with the industry in our own facility plus a classic collection like this — we really are unique.”

US Job Openings Fell in October to Still-High Level