WESTWEGO, La. — The next time you dine at a New Orleans restaurant, there’s a chance the ingredients for your meal came from the massive new US Foods distribution center located on River Road on the west bank of the Mississippi River between the Crescent City Connection and Huey P. Long Bridge.

On Nov. 16, local officials joined US Foods employees and customers for a ribbon-cutting ceremony and party at the roughly 200,000-square-foot facility, which is essentially an enormous loading dock connected to several giant, temperature-controlled warehouses. An attached administrative area includes a demonstration kitchen and an “interactive technology center” for customers. The operation is home to about 200 employees, many of whom were on hand for the celebration, where caterers were serving lunch, beignets and other festive fare. 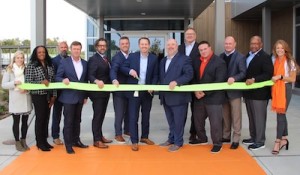 You could say that the grand opening event, which also featured a brass band and swag bags, has been in the works ever since 2017, when Illinois-based US Foods purchased F. Christiana, a local distributor of food and food-related products that had been family-owned for three generations. At the time, F. Christiana boasted nearly $100 million in annual sales and more than 1,800 customers in Louisiana, southern Mississippi and southern Alabama. Independent restaurants, hotels and convenience stores made up the bulk of the distributor’s clientele.

F. Christiana also owned a 70,000-square-foot distribution center at 7251 River Road, the site of the new supersized US Foods facility.

Over the last five years, operations continued as new owners drew up plans for the expanded facility and the eventual rebranding. The pandemic slowed the process down a bit, but company executives are happy with the end result.

“This is an important milestone for our growing Louisiana team as we continue to partner with local foodservice operators who support our vibrant and thriving New Orleans community,” said Dan Hildreth, US Foods market vice president. “We value our role in helping our local restaurants ‘make it’ with our differentiated and expanded resources and services and look forward to serving additional markets with our growing service footprint.”

According to March 2022 numbers from trade group SIAL America, U.S. Foods is the country’s second largest major food distributor behind Sysco, which claimed $60 billion in international sales in 2021. US Foods is about half that size but growing. The new New Orleans-area distribution center is the company’s 70th to come online.

US Foods, which has corporate roots dating back 150 years, nearly merged with Sysco in 2013, but the Federal Trade Commission blocked the deal. The company claims about 250,000 customers, 70 distribution centers, 80 “cash and carry stores” and 28,000 employees. It sells more than 400,000 products.

At the Nov. 16 grand opening, the company’s Director of External Communications Sara Matheu emphasized that e-commerce, technology and business solutions are also on the menu.

“We focus on the independent operators,” she said. “A lot of the national chains have their own machine about them, helping them operate more efficiently. That’s our role when it comes to independent operators, because they don’t have that overseeing entity. So we partner with them to say, ‘Hey, here’s the latest tech to help with operations and help you balance your profit and loss statement. Here’s how we can help you reduce labor costs. Here’s where food costs are going up. So it’s a whole partnership. It’s just not delivering food.” 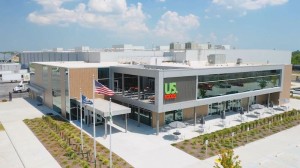 The project is a win for parish and regional economic development officials. JEDCO, Jefferson Parish and Louisiana Economic Development began discussions with US Foods on the expansion in 2017. A JEDCO spokesperson said the organization helped “find funds” for infrastructure improvements on the site and surrounding area and provided “creative solutions to support and capture the company’s significant investment.” The State of Louisiana, meanwhile, offered an incentive package.

According to JEDCO, the project benefited from two “performance-based” grants from the state’s Economic Development Award Program. $327,000 was awarded to US Foods for construction of sanitary sewerage facilities, and $234,000 went to the parish to cover costs to update public water system facilities to support the project. In addition, Jefferson Parish paid $800,000 for additional upgrades in the “near vicinity” of the US Foods site.

“Business retention and expansion have long been a key component of our economic development strategy,” said JEDCO President and CEO Jerry Bologna, who attended the ribbon-cutting ceremony. “When a nationally recognized business of US Foods’ caliber chooses to expand in Jefferson Parish, it lends credibility to our efforts and promotes our community as a destination for global business. We commend US Foods for creating jobs, investment and opportunities in Jefferson Parish and across the region.”

“The expansion of US Food solidifies Jefferson Parish and Greater New Orleans as a prime location for a business and a hub for food manufacturers,” said Michael Hecht, president and CEO of Greater New Orleans Inc., the regional economic development organization. “We are grateful for the work of JEDCO and the state to support US Foods, and to help nourish the regional economy.” 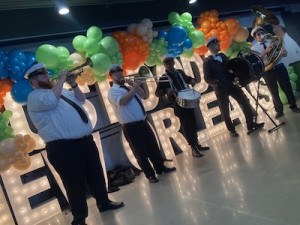 A brass band entertains guests at a Nov. 16 celebration at the new US Foods distribution center in Westwego.

To Sara Matheu, though, it’s all about serving the customer.

“Typically, we’re a food service partner to them,” she said. “So we’re delivering food and supplies. And then on top of that, they can come in and test products, and there’s all these free services that we offer. It’s all about a strong partnership and helping them succeed. I love being a part of this company because you just love to see these independent restaurant operators thrive.”