WELCOME TO THE “AIRCRAFT HOTEL”

Technically, it’s a new hangar measuring at 6,000-square feet. But upon its recent completion and infant stages of use, Vincent Caire — the Port of South Louisiana’s Director of the Executive Regional Airport and first-hand witness to this entire facility’s five-year makeover — reminds patrons of its versatility with another, catchier phrase: “The Aircraft Hotel”.

Construction of the $600,000 transient hangar was completed in August 2017. It became operational shortly thereafter. The structure is suited for the aircraft of daily and overnight visitors and equipped to handle every foreseeable need for the traveler and flight crew. The hangar is the perfect shield for the aircraft against South Louisiana’s cornucopia of dubious weather and features storage facilities for passenger property and restrooms.

“The reason (for this project) is simple: We were out of hangar space,” Caire said. “And there is a demand from our tenants and transient customers.”
The hangar is leased out by the Port of South Louisiana and can be reserved in its entirety or in sections for the length of the travelers’ stay in the River Parishes. The hangar at the Port of South Louisiana Executive Regional Airport is just another gem making the facility attractive for those in town for business or leisure. 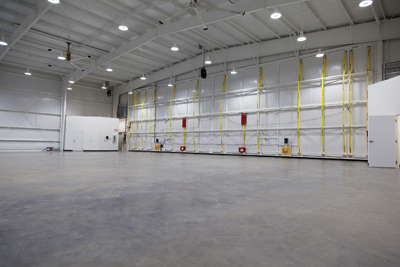 For example, Caire recalled, “very positive and appreciative” feedback from a travel party that rode down the Mississippi River on a Steamboat cruise that departed from the Midwest. As they journeyed south via boat, their private aircraft was flown down to the airport awaiting their arrival. As the tourists explored the plantations of the River Parishes, their plane was able to be refueled and fully catered. From Oak Alley, the travelers arranged a luxury car to pick them up and drive them to the foot of their plane.

“There are stories of business executives that are very happy to be within minutes of their destination, eliminating the need for a 45-minute car ride from the other airports,” Caire said.

When the Port acquired the airport and unveiled its development plan, referred to as an Airport Layout Plan by the FAA, in late 2011, the motivation for upgrades and improvements was to attract more corporate and business traffic. Specifically, the traffic of those tenants, contractors and their customers operating within the Port District — making trips in and out to hold a meeting, or to pop in and check on construction of a plant expansion — the airport’s calling card, said Caire, “is that it’s much easier and convenient than landing in Kenner and driving west”.

The plan has come to fruition and, Caire explained that new projects like this hangar aren’t necessarily done in pre-outlined phases; they are also initiated in partnership with an aircraft operator interested in regular use of the airport to support the demands of their business. 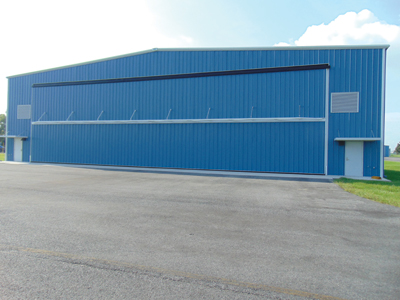 In addition to this hangar, the Port has extensively modernized and restructured the airport to make it a viable business-travel destination. The original runway, which measured 4,000 feet, was expanded to 5,150 feet in 2013, enabling larger jets to take-off and land. Shortly thereafter, the airport expanded its full service fueling capacity, installed an updated weather observation system, and in 2015, cut the ribbon on a completely remodeled terminal building complete with rental car services, a pilot’s lounge and conference room to support the all too common, “meeting before the meeting”.

“Over the past five years, we have made continuous improvements to the airport that are attracting the attention of aircraft operators that need aviation services in the area,” Caire said. “The most impressive and remarkable transformation is the number of flight crews that are encouraging their clients to use our airport because of its convenience and proximity to the heart of this industrial area.”

Beyond this latest hangar, plans are in the works to construct more hangar space simply because there is an obvious need, not only for current tenants, but also for new transient flights.