Gardner Realtors restores circa-1871 Carrollton neighborhood offices as it celebrates its 75th year in business.

A portrait of Gertrude Gardner hangs in the newly restored, circa-1871 offices of Gardner Realtors. The building began as newspaper offices in Carrollton.

Entering Gardner Realtors’ newly renovated offices on Maple Street, you’ll see a decidedly residential space. A cream-colored wooden desk and slipper chair are situated to the right, and to the left, an upholstered sofa with a brass table.

The first vignette likely to catch your eye, however, is a portrait hanging above the white mantel on an exposed brick wall. The painting is of Gertrude Gardner, founder of Gardner Realtors. This year, the company is celebrating 75 years in business. Known as an innovator, Gardner moved her company into the circa-1871 corner building at 7934 Maple St. in the Carrollton neighborhood in the ’40s. Her legacy is alive and well — the company is now run by the third and fourth generations of her family—Glenn and Sharon Gardner, and their children, Crystal Gardner-Phillips and Chip Gardner.

Recently, Gardner Realtors unveiled an extensive renovation of the space. The new look is light, airy and was designed with residential flair.

“We wanted to create a real estate office where people feel comfortable coming in and saying hi,” says Crystal Gardner-Phillips, vice president and head of marketing and public relations. “It’s welcoming, with a lot of features you’d see in a home.”

To achieve an atmosphere that had the elements necessary for a modern, functional office, as well as the comfortable, homey design scheme they envisioned, the Gardners worked with Kim DeVun of KDK Interior Designs. 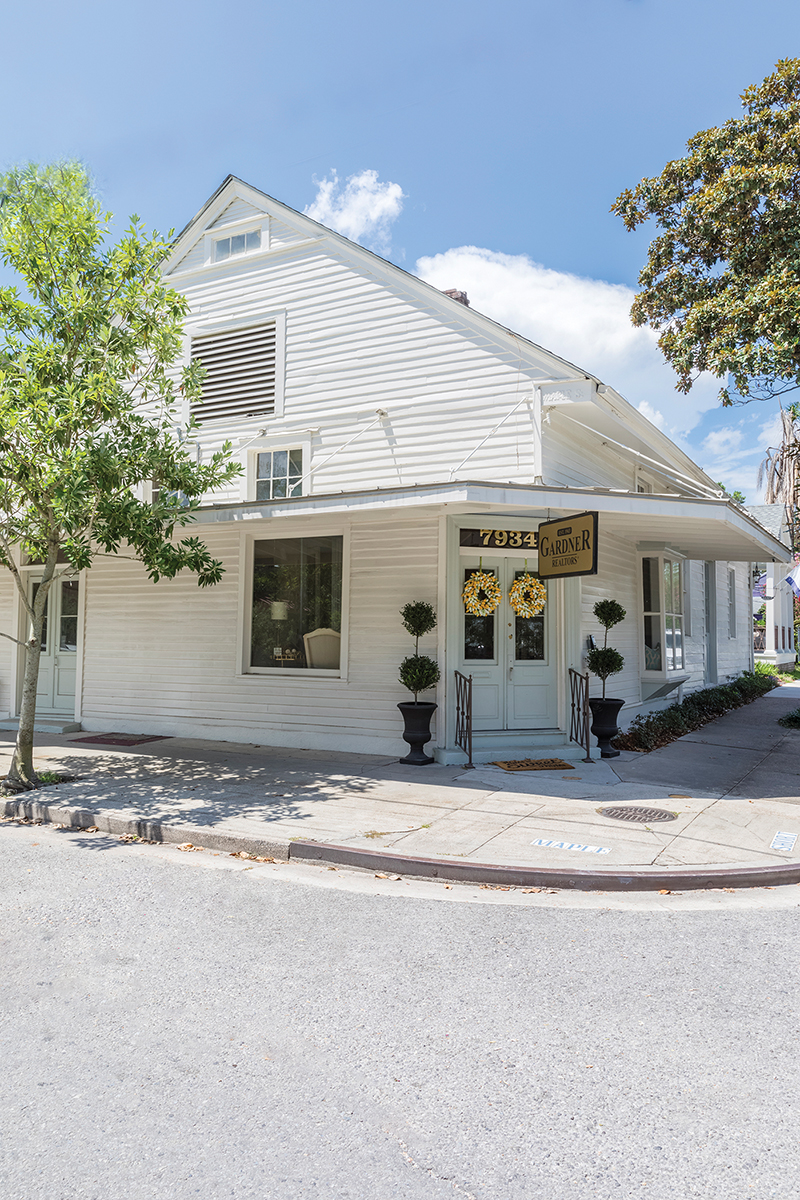 Gertrude Gardner moved her company into the corner architecture-style building at 7934 Maple St. in the Carrollton neighborhood in the 1940s.

For the structural and preservation aspects of the project, they turned to Alec Adamick of Adamick Architecture, which specializes in historic preservation.

From a business standpoint, the family wanted to take advantage of historic tax credits, but Gardner-Phillips says they also saw the restoration as an opportunity to preserve part of New Orleans’ history. The space is furnished and decorated with the work of local New Orleans artists and designers, including Lisa Rickert of AVE Home, Holly Mabry Poole Art and Chris Bevolo of Bevolo Gas & Electric Lights. The plants are from The Plant Gallery.

There are three meeting rooms in the 4,700-square-foot offices. The Gertrude Room serves as an homage to the company’s founder and is located in her former office in the center of the building. It features an original bargeboard wall, as well as a mix of traditional and contemporary furniture and colorful artwork. 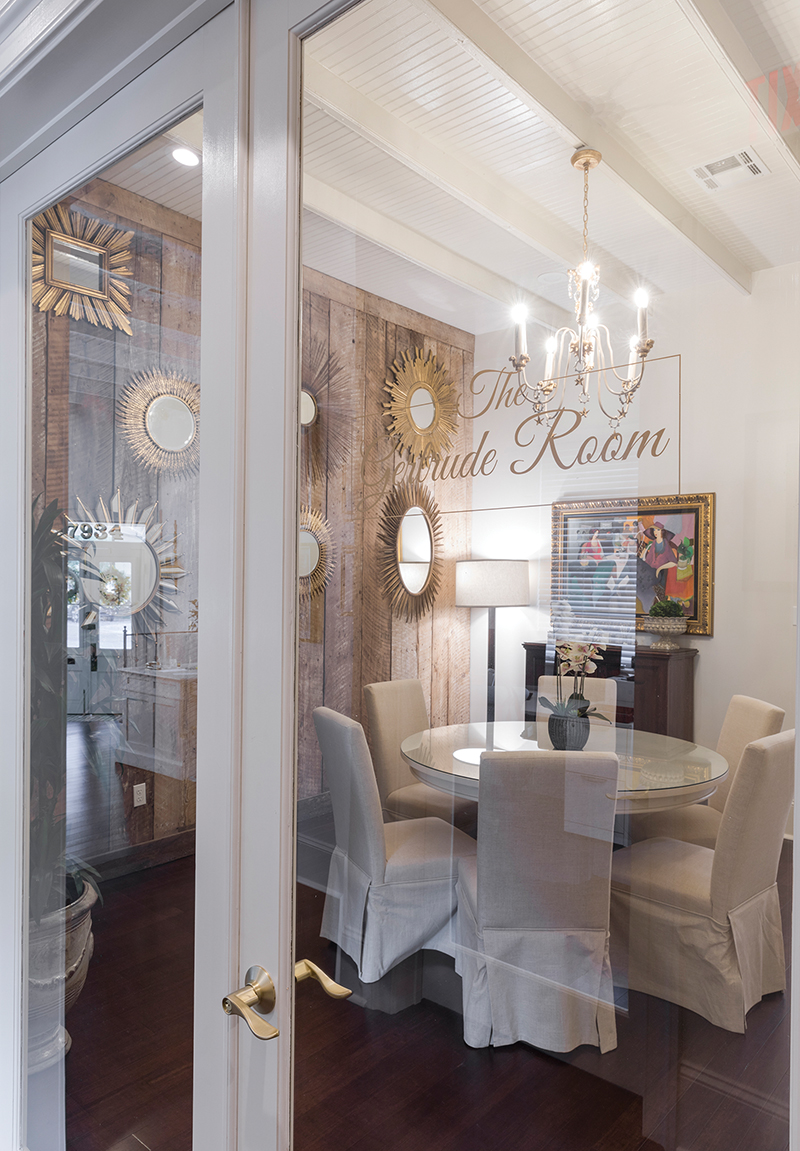 The Gertrude Room serves as an homage to the company’s founder and is located in her former office in the center of the building.

The Garden Room is in the old “cottage,” which was the print room of a community newspaper when the building was first built. The bright Garden Room employs walls of windows, a wealth of tropical plants and breakfast room vibes. The Maple Room is off the lobby and overlooks the bustle of Maple Street. Each room has a round table, reminiscent of comfortable gatherings around the kitchen table at home. 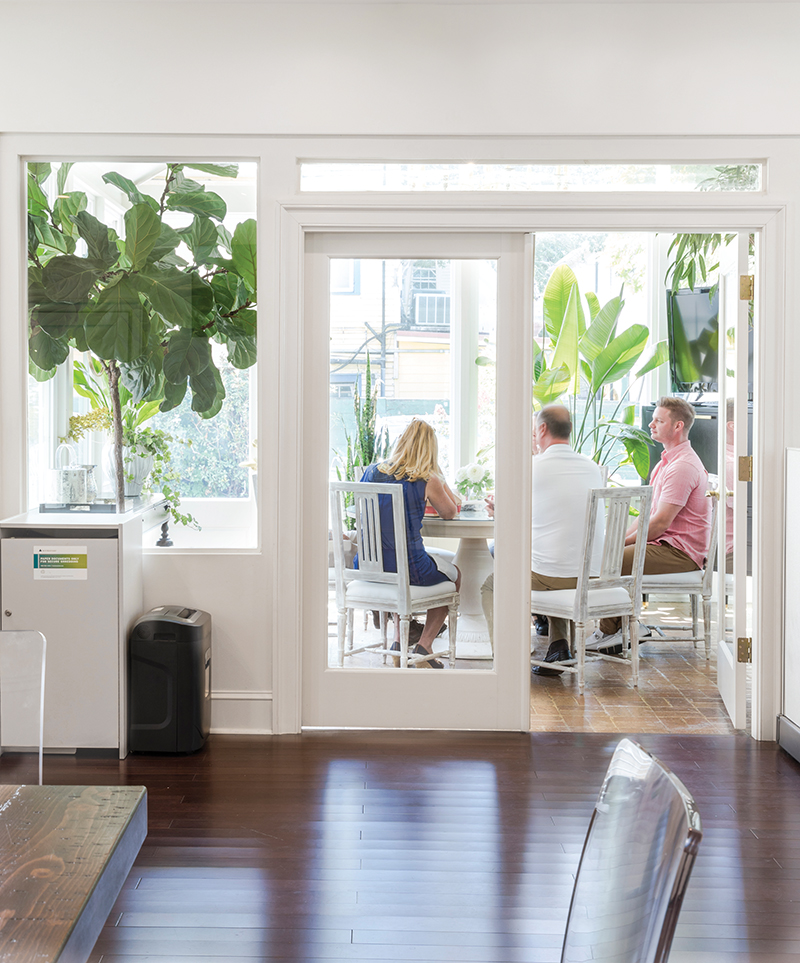 The Garden Room is one of three meeting spaces in the offices. It is housed in what the owners call The Cottage, which used to be the print room when the building housed a newspaper. The Gardners worked with Alec Adamick of Adamick Architecture to preserve this historic slice of New Orleans history. For the interior design, they worked with Kim DeVun of KDK Interior Designs. 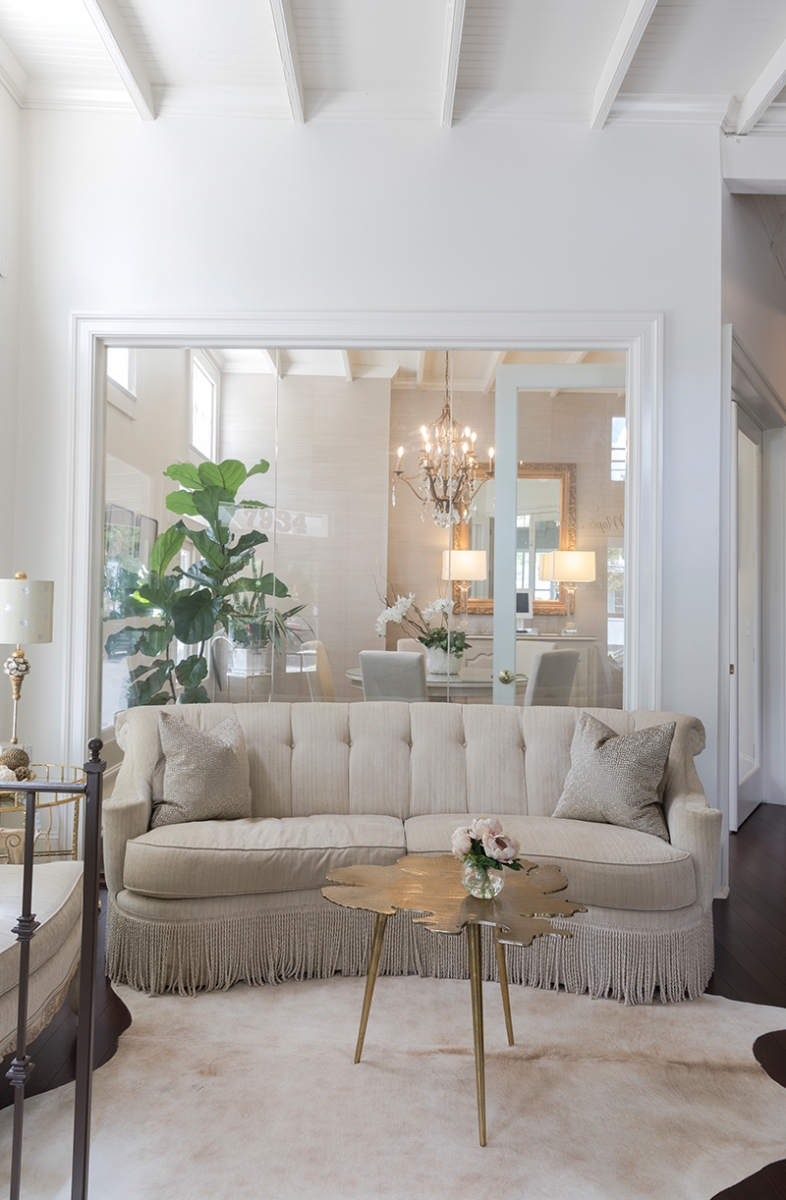 The Maple Room is off the lobby and overlooks the bustle of Maple Street. Each of the three meeting rooms at Gardner Realtors has a round table, reminiscent of comfortable gatherings around the kitchen table at home.

Throughout the space the ceilings were raised, carpet was replaced with dark wood flooring, and systems and storage were put in place to de-clutter and organize.

“The realtors were a big part of the process,” Gardner-Phillips says. “They wanted it to be very client-centric. They wanted an updated space. Our office etiquette is not bringing in random cups and plates and leaving things lying around; we use the storage space on-site, and anything new — everyone has to agree. I kept hearing the words ‘good energy.’ All of us want that and can feel it when we are in that type of space, but we didn’t know how to accomplish that energy, which is why we relied on our relationships with local artists and designers.” 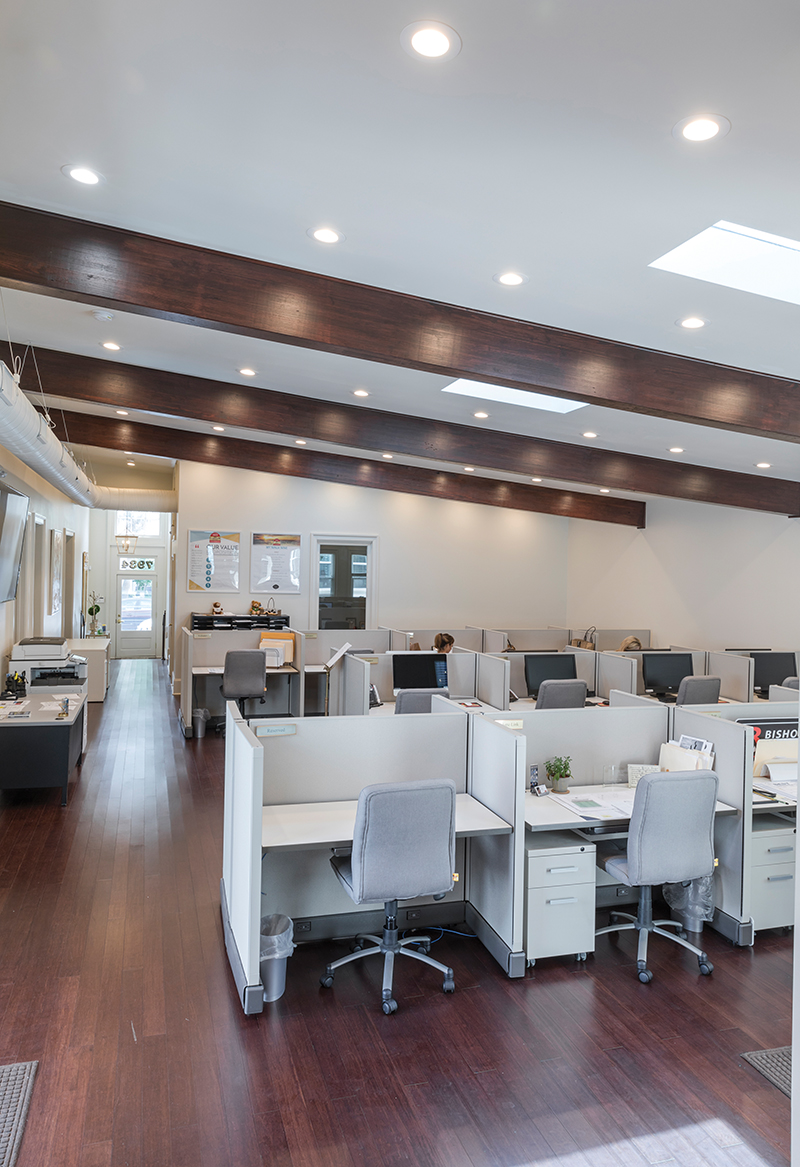 The collaboration room takes advantage of vaulted ceilings and exposed beams, with the added bonus of skylights. Glenn Gardner, president of operations, says this room was new construction because termites had their way with the prior structure over the years. It was designed, however, to mesh with the historic architecture.

One of the fruits of those relationships is that if a client sees and buys a Bevolo lantern — like the one featured in the reception area — a portion of the proceeds goes to Nola Mission, which is one of Gardner-Phillips’ favorite charitable organizations.

She and her mother, Sharon, worked closely with the designer and architect to ensure that the look of the offices was contemporary but not too modern, and that it incorporated traditional flavor and the company’s history, without being dated. The design also needed to appeal to the different generations of employees and clients using the space.

The long galley kitchen, as well as high-top tables and a television, are near the open office area or “collaboration room,” which is a lively space with a vaulted, exposed beam ceiling and sunlights. 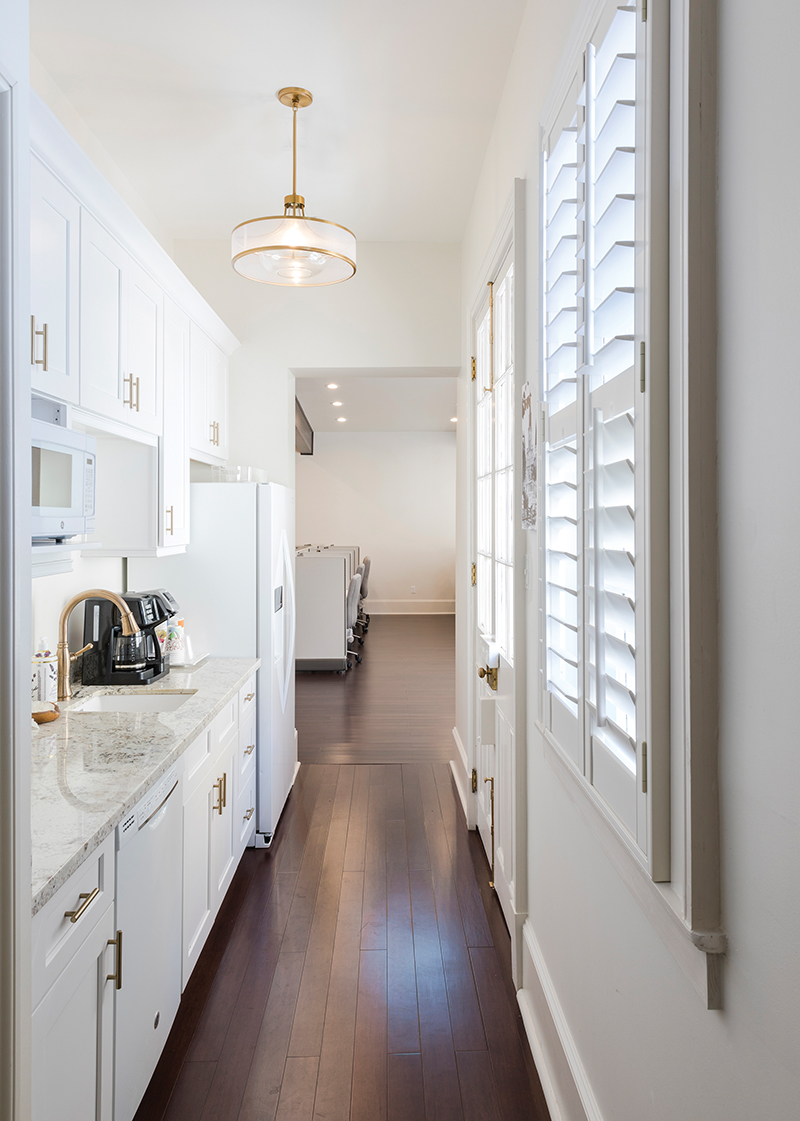 The galley kitchen features white cabinets with brass pulls and serves as a connecting hallway between the two sides of the building.

“I used to come to this office when I was a little kid,” says Glenn Gardner, president of operations. “It looks a lot better now! We did enjoy restoring it to even probably better than it was before.”

Opening up the space, creating a more welcoming and collaborative multi-generational atmosphere, while at the same time being attentive to the functional aspects of the modern-day office, increasing accessibility for less-mobile clients, and honoring the company’s founder were the priorities and the areas in which the group didn’t compromise.

“We don’t want to be trendy,” says Gardner-Phillips. “We want to be timeless, because that’s the kind of company we are.”

Mardi Gras Moola Is a Parade Throw That'll Save You Money