The Jefferson Chamber Young Professionals created a flag to represent the splendor of Metairie.

The Jefferson Chamber Young Professionals put forth great effort to design and create a flag to represent Metairie, and now it flies high at the intersection of Causeway and Veterans Memorial boulevards.

Metairie — while not an official city — is the fourth-largest community in Louisiana and the fifth-largest census-designated area in the United States. It shares a long, rich history with its neighboring Metairie Ridge areas of Jefferson, Elmwood and River Ridge.

Efforts to create a flag to represent the area took almost two years, spearheaded by Jeffrey Simno, Council Aide, District 5. He proposed the idea in connection with the New Orleans tricentennial, and it was “An instant hit, so we ran with it,” he said.

“We were looking for a project that could help rally the community, garner attention for our organization and bring about a better quality of life and greater community identity for the area,” explained Simno. “We want to bring greater attention to the area, to attract new residents, new businesses and new visitors. We have a terrific quality of life, safe neighborhoods, low taxes and great services. These are things to celebrate.”

After conducting extensive research on symbology that would best represent the area, he created several designs. He looked into heraldry, vexillography (the study and design of flags) and the 300-year history of the community, along with the ancestral roots of the region. His vision was for the flag to “express, through symbolism, that history, along with the community’s present-day values and goals,” he said.

He presented his designs to the JCYP Steering Committee. He also served as the chair for the JCYP Flag Committee to assist in the flag’s creation and promotion.

Simno also met with local civic and business organizations and presented the flag at local events and farmers markets. Once the flag was selected, it took about another six months to bring it from concept to reality and to get approvals from the Parish Council.

“The community support and enthusiasm has been tremendous,” he said. “With the introduction of the flag, we hope to unite Metairie and the Metairie Ridge neighborhoods.”

The flag collectively gives a respectful nod to the area’s diverse French, Spanish and American heritage and a “sincere appreciation for our rich Louisiana history and New Orleans ancestry,” said Simno.

The flag debuted to rave reviews from flag designers across the nation, and revenue from the flag sales will benefit various projects for the committee. He says JCYP intends to continue to promote the shared community identity, local businesses and educational efforts by working with local schools on lesson plans to teach the youth about the flag and the area’s history. Additionally, JCYP intends to work with the Jefferson Chamber Foundation on a quality of life project along the Metairie Lakefront.

“In this way, we hope to help our community connect with and better enjoy our area’s most prized environmental asset,” said Simno.

Simno notes that there is a “real hunger” amongst members of the younger generation to connect with culture and one another, and the flag is ultimately “something we can all share and call our own, because it represents all of us.” 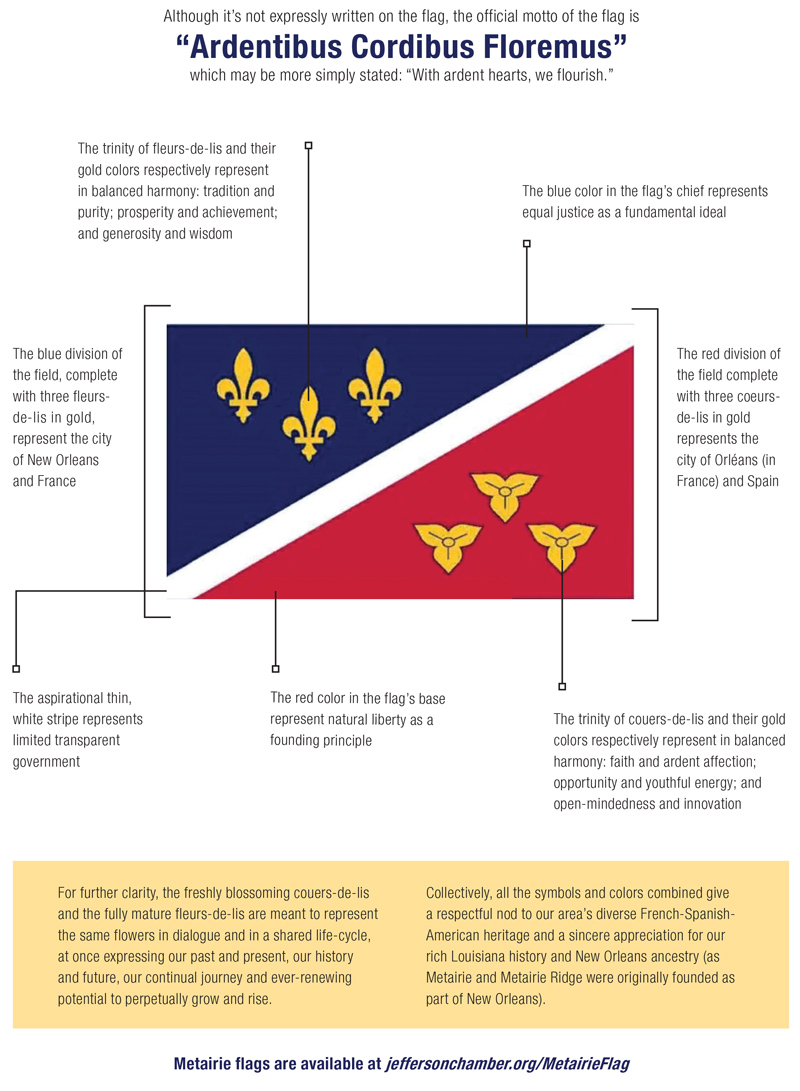