“Each of our hotels embrace the local flavor of the cities they are in, and Virgin Hotels New Orleans is certainly a fun one,” said Sir Richard Branson, founder of Virgin Group and recent space traveler, in a press release. “The city’s welcoming spirit, exciting entertainment and incredible culinary scene are all things we are excited to bring to life through our hotel.” 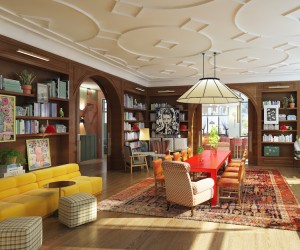 The hotel’s rooms feature two distinct spaces. The dressing rooms includes a “full vanity, makeup desk with a well-lit mirror, an extra-large shower with a bench, Red Flower toiletries, and a closet for two.” The lounges have a “patented ergonomically designed lounge bed, complete with a bullion fringe trim, a red mini-fridge stocked with street-priced comforts, a high-definition TV, yoga mat, and a cafe worktable with rattan base and tempered glass placed in front of a cozy built-in window seating offering city views.” The chambers are separated by a pair of paneled doors.

Reservations are currently being accepted and can be made directly on the hotel’s website: virginhotels.com/new-Orleans or by calling (833) 859-0044.

EXPLAINER: Why Are So Many Flights Being Canceled?