Panoramic views of the Mississippi River and the expansive Docville Farm from 50 feet in the air leave an impression on even the most casual visitor to the Arlene Meraux River Observation Center in Violet, Louisiana in St. Bernard Parish. For project architect and designer, Myles Martin, of Rozas Ward Architecture, it’s an essential part of the experience.

“On a clear day the silhouette of New Orleans can be seen on the western horizon,” says Martin.

Martin’s clients at the Meraux Foundation — a nonprofit dedicated to “building a better St. Bernard” community — needed a space at its Docville Farm center for culture and learning, where people could become educated about the land the Meraux Foundation helps preserve. The property, which was once the Story Plantation indigo farm, is located about 30 minutes outside New Orleans.

“The design of the observation center is influenced from the surrounding agricultural context on Docville Farm, including the local barn buildings located along the Mississippi River,” says Martin. “Expansive glass walls at every floor preserve this openness and make the views of the river and the farm accessible. Capturing these views was a primary goal of the design.” 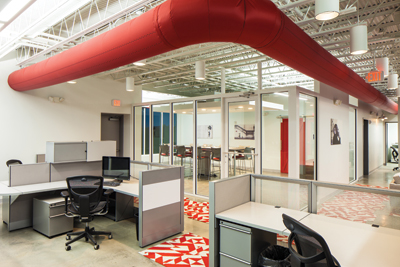 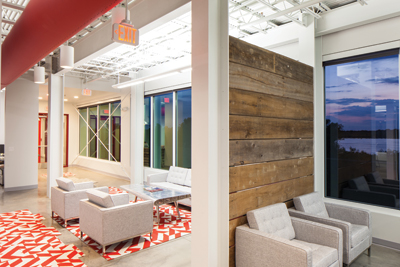 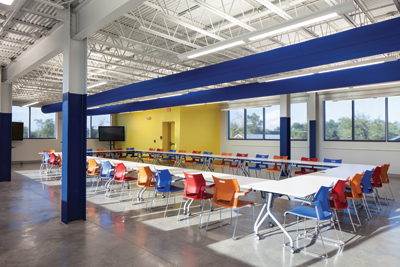 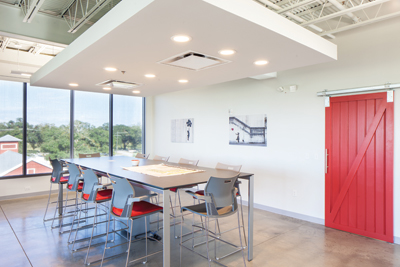 TOP LEFT: Exposed metal beams, visible ductwork and concrete floors are hallmarks of the interior. TOP RIGHT: Colorful throw rugs, a mixture of modern and traditional furniture and other decorative elements, as well as wall coverings made from reclaimed wood repurposed from a structure formerly located in the same spot, soften the hard, industrial interior surfaces. BOTTOM LEFT: The open plan concept showcases the structure of the building. BOTTOM RIGHT: Each level contains various meeting spaces, each with a distinct look and feel.

The approximately 20,000-square-foot, red, barnlike structure features an open plan concept which showcases the structure of the building. Pops of color, wall coverings made with reclaimed wood from a former structure in the same spot, built-in furniture and doors, colorful throw rugs, and a mixture of modern and traditional furniture and decorative elements soften the concrete floors, visible ductwork and exposed metal beams.

Improving St. Bernard Parish is at the heart of the Meraux Foundation’s mission, and conservation is a key part of that goal, so Martin incorporated many energy-saving design elements, including solar panels, closed-cell insulation and low-E, double-insulated glass that reduces UV light exposure.

“Surrounding farm areas will be drip-irrigated from a large, rain-capturing cistern, and the design is characterized by highly efficient plumbing, electrical and mechanical systems,” Martin says. “This LEED-friendly building is built to stay in tune with the environment and allows the Meraux Foundation to operate efficiently.”

In the beginning, Martin says the first floor was envisioned as a parking area, but over time, that idea was put aside.

“Through some initial concept design work [it was] quickly determined that this area was a great opportunity to create an indoor/outdoor flex space where the community could gather,” says Martin. 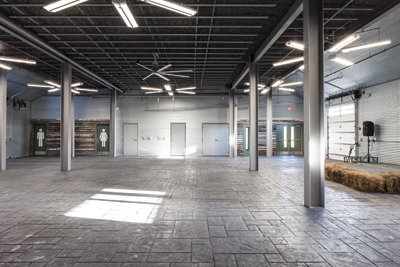 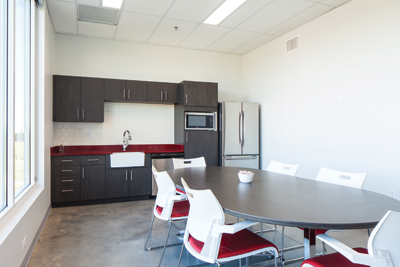 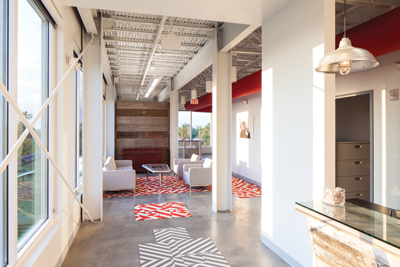 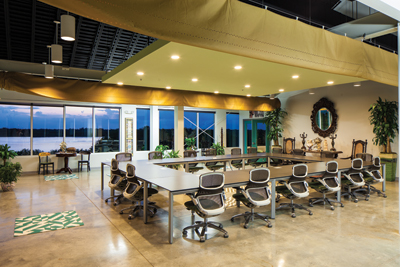 TOP LEFT: Originally the first floor was envisioned as a parking area, but morphed into an indoor/outdoor flex space for community gatherings. TOP RIGHT: Martin says the biggest challenge was transforming what might have been a lackluster meeting space into a striking structure that is at home in and enhances its rural setting. BOTTOM LEFT: Energy-saving elements — such as solar panels, closed-cell insulation and low-E, double-insulated glass to reduce UV light exposure — are incorporated into the design. BOTTOM RIGHT: Expansive glass walls on each floor contribute to the open plan and take advantage of views of the river and the farm.

Along with the observation center, several outbuildings occupy the main area of the farm, including a turn-of-the-century white farmhouse and the circa 19th-century Dave Thompson Event Barn (which you may recognize as the Texas honky-tonk from season one of HBO’s “True Detective”). It was relocated in the 1940s from the French Market in New Orleans, then reconstructed at Docville.

As is often the case with design, the biggest challenge of the project was also the catalyst for transforming the space — in this case what could have been a lackluster meeting space into a striking structure that beckons, intrigues and delights those who encounter it, while still managing to feel right at home in — and even enhance — its rural setting. But, if location, location, location is the No. 1 draw for most, for Martin it always comes back to the view.

“The fifth-floor observation deck is my favorite place on the property and is always my last stop before I leave,” he says. “At over 50 feet in the air, by far one of the highest points in the area, you have a clear vantage point of the gorgeous natural surroundings and the mighty Mississippi River running parallel to you. This visual connection of the overall city, while in the peace and quiet of mother nature, gives you an instant reflection of how far you are away from the hustle and bustle of everyday life and makes the moment that much sweeter.”