The day begins with scrambled eggs and chorizo, spiced and served over a bed of roasted sweet potatoes. For lunch, there’s dill-tinged flakes of Cajun roasted salmon combined with crunchy red quinoa and a lemon crema. At dinner, a steaming pork tenderloin, with a syrupy maple-sage glaze, is offset by the balsamic spike of Brussels sprouts.

A full day of gourmet dining at only 1,300 calories; That’s Your Nutrition Delivered.

A New Orleans-based food service, Your Nutrition Delivered (YND) crafts appetizing meals for the health-minded individual, offering home delivery with customized nutrition goals. The company also offers vending machines in the workplace designed to provide lunch and snack options that are both gourmet and healthy.

Office workers are the prime demographic for Your Nutrition Delivered. When lunch comes around and the most convenient choices are overpriced restaurant meals or salty vending machine snacks, the average employee, already combating a sedentary lifestyle, isn’t left with a lot of options for nourishment.

In its “set it and forget it” strategy, Your Nutrition Delivered takes the disciplinary reins from an aspiring dieter. YND president Erik Frank, along with a team of chefs, crafts meals with a conscience, steering clients clear of the misleading packaging in grocery stores and conflicting dietary tips online.

So why trust Your Nutrition Delivered? What do they deliver, exactly?

In 2010, Erik Frank was at the top of his game, winning the 275-pound weight class in the American Powerlifting Association National Championship. His start in the sport was not so auspicious. “At my first meet, I came in fourth,” says Frank, a certified personal trainer. “That sounds okay, until I tell you there were only four participants in the meet.”

But four years later, he was the champ. Frank credits YND’s success to that irrepressible spirit. He started the company in 2011, when his work as an insurance company consultant revealed that many office workers had dangerously unhealthy habits, habits that proved costly to the employers charged with insuring them.

With the onset of the Affordable Care Act, large companies began corporate wellness initiatives to reduce these costs. “I was interviewing thousands of employees about their eating habits, their workout routines, their family history. But I realized that corporate wellness wasn’t going to work if we didn’t change the food that was inside companies,” says Frank. “People could take 10,000 steps a day and get flu shots, but if they were eating bad food, they were going to be sick and cost a lot of money.”

Frank started his company by simply delivering meals to employee’s homes. In 2012, he attended Idea Village’s original “Big Idea” competition for entrepreneurs. He watched the three finalists stand on stage and pitch their ideas to an audience of 1,000 people. “I told my banker, ‘I’m going to be here next year. I’m going to win that $50,000.’”

In 2013, Frank took home top honors at the contest. “When they announced I won, my wife jumped on stage,” laughs Frank. “Tim Williamson [CEO of Idea Village] calls this the ‘rock star moment.’ He says women are now jumping onstage for entrepreneurs rather than rock stars.”

With his $50,000 winnings, Your Nutrition Delivered rapidly scaled up operations later that year.

YND’s custom refrigerated vending machines use Shelf X, a technology out of Israel. Frank purchased a working prototype in 2013.

The machines can tell by weight removed from the shelf how much a person is buying. “You just swipe your credit card, pick out what you want, and then close the door,” explains Frank. “The machines are all stocked a minimum of two times a week, or as often as needed.” If desired, items can be placed directly in a microwave for heating.

Now, with 25 coolers, Frank is the largest single owner of Shelf X in the world.

When Your Nutrition Delivered went looking for its first corporate client, one name stood out.

“Laitram was the first business that came to mind,” says Frank. In 2011, the manufacturing company was undergoing a crisis in healthcare, with company annual expenses totaling $11 million.

Franck Labiche was the architect behind the company’s solution. “We had seen a 40 percent increase in our premiums between 2006 and 2011,” says Labiche. “We needed a more proactive wellness model.” 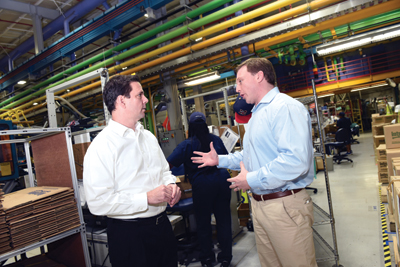 Frank Labiche (left) of Laitram says the company has seen positive movement in their insurance premiums since installing YND machines.

Laitram invested in a full-time nurse practitioner and a 6,000-square-foot wellness center. They also installed one of YND’s machines.

The company now has half a dozen coolers stationed throughout the grounds, serving over 1,000 employees.

“From 2011 to 2014, our insurance premiums stayed flat,” says Labiche. The company saw a 5 percent creep in 2015, but it was a much smaller increase than the hikes suffered by other businesses in the area.

“Everybody loves Erik’s meals,” says Labiche. “We almost consistently — particularly in one of the areas — empty coolers in about a day or two.” Labiche says his preferred pick is the turkey meatballs with spaghetti. “And all the salads are really delicious,” he adds. “The dressings are fabulous.”

“I still remember being on that stage as part of the final three [at the Big Idea competition],” says Frank. “Archie Manning said to me, ‘New Orleans has the best food in the world. How will you make this idea work here?’”

But Frank knew New Orleans’ great food came accompanied by grave health problems. “We’re the greatest city, but the least healthy. We’re No. 1 in diabetes and No. 2 in obesity,” he says. His response to Manning: “If we can make this idea work here, we can make it work anywhere, because we have the greatest food in the world.” By his account, if he could persuade New Orleans residents to accept smaller portions and fewer calories, he’d have no problem convincing cities with less tempting food.

In early 2014, Frank approached Humana about installing a vending machine for their New Orleans employees. “Humana is a $50 billion company with offices all over country,” says Frank. “Their cooler became our very best seller overnight. They’ve said, We want this in every office in the country.”

“One of the things that we do is really encourage our associates to live a healthy lifestyle, says Rhonda Bagby, vice president of Humana’s Louisiana Employer Group. “We recognize they spend a lot of hours in the workplace and need healthy options.”

“Nutrition is cornerstone to health,” adds Dr. Laura Trunk, Humana’s chief medical officer in Louisiana. “When our associates see one of their colleagues order a salad, they’ll be more likely to do it. They see how easy it is. It’s affordable, and you don’t have to leave the office.”

In addition, Humana has set a goal for the year 2020 to improve the health of certain communities, including New Orleans, by 20 percent. Efforts include not just education but easy access to nutrition, like the convenience afforded by YND’s coolers.

“Seventy percent of chronic diseases have a lifestyle component that influence them,” says Dr. Trunk. “If you’re eating poorly and trying to control hypertension, diabetes, or pre-diabetes, you’re not going to be very successful.”

YND works with dieticians from Cancer Treatment Centers of America to craft specific meals designed for patients with specific types of cancer.

“Curing cancer is a monumental feat,” adds Frank. “Some people say we’re never going to cure cancer. But what I’m interested in is how do we treat it most optimally? How do we eat to prevent cancer?”

Too Much of a Good Thing?

To start home delivery service, each new customer fills out a brief questionnaire on his lifestyle and nutrition requirements, then it’s on to the mouthwatering menu, which caters to various dietary restrictions.

While many of YND’s clients opt for home delivery, Frank himself actually warns against using the company for every meal. “We hate someone getting 21 meals a week from us, getting burned out, and never coming back,” says Frank. 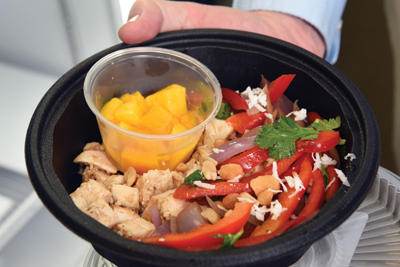 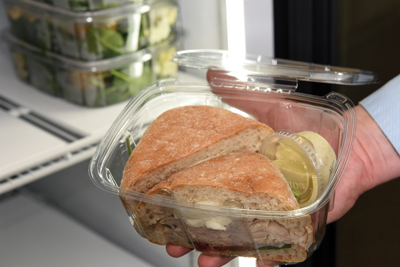 Your Nutrition Delivered’s healthy vending options are made without preservatives from fresh ingredients locally sourced whenever possible.

He believes diversity in food sources plays an important role in dietary discipline. “We aren’t Nutrisystem; we aren’t Jenny Craig giving you three meals a day, seven days a week. No matter how good it is, you’re going to get sick of it.”

“We have customers who have been with us since 2011,” Frank adds. “They get five or six meals a week from YND. We’re part of their life, but not their entire life.”

Though Frank’s focus had been purely on winning the Big Idea contest when he joined Idea Village’s accelerator program (IdeaX), he was set straight on the program’s real benefits. “I learned there was a lot more than the Big Idea and the money. Idea Village teaches you how to take a product to market, talk to investors and raise capital. YND wouldn’t exist without it.”

He moved from the Idea Village to the Entrepreneurs’ Organization’s accelerator program. “There they teach you how to run a business, hold meetings, hold employees accountable, do employee reviews, hire and fire…”

Frank is now chairman of the EO accelerator and recruits new businesses to join the program. He also sits on Idea Village’s advisory board. “Something I pride myself and my company on is paying it forward,” he says.

Currently YND is operating within 4,000 square feet inside the Times Picayune building, but plans are in the works now to move to a 30,000-square-foot facility in Jefferson Parish. The company’s food offerings will be crafted on site.

Frank has 14 employees who assemble the food, which he says is sourced as locally as possible. Thanks to the refrigerated machines, preservatives are not necessary.

“Refreshment Solutions, the largest vending machine company in the state, bought all our coolers,” says Frank. “Now we make the food, and they handle distribution. It’s great because this opens us up to being available all over Louisiana, as well as Mississippi and Texas.”

Next, YND is set to expand operations to a 10-state region that includes Florida and Washington, D.C.

•  After obtaining Your Nutrition Delivered’s vending machines, Laitram saw blood sugar or blood pressure go down among 80 percent of their 1,200 employees