Many may not see the beauty in a neglected piece of land near the Pontchartrain Expressway, but when New Orleans transplants Joel Hitchcock Tilton and Jimmy Seely discovered the overgrown, quarter-acre lot on South Rampart and Clio Streets, they found their Garden of Eden.

“We came across the lot in late 2014 and broke ground in early 2015,” Hitchcock Tilton said. “We lived in the Central City neighborhood for a while and saw that it was up-and-coming, especially along the Oretha Castle Haley corridor. Also, the proximity to Downtown made it an interesting spot for a garden oasis smack dab in the middle of the city.”

Hitchcock Tilton and Seely transformed the property, located at 1131 South Rampart St., into an urban farm. They removed more than 2,000 bricks by hand, brought in truckloads of manure, built seating, a goat pen, a quail coop, beehives, a brick wood-fired oven and grill and a stage for live music. Paradigm Gardens harvests food for local restaurants and proved fertile ground for a unique dinner and entertainment event venue.

On Tuesday, March 7, from 6:30 p.m. – 9:30 p.m., Paradigm Gardens will present the first of a six-installment dinner/ concert series featuring some of New Orleans’ top chefs, oyster shuckers and musical bands.

The first night will feature award-winning chefs from Patois, Boucherie and Angeline as well as raw oysters from Two Girls One Shuck and drinks from The Courtyard Brewery and Cathead Vodka. Jazz and Blues quartet Sonic Harvest will be performing its funky tunes to keep the crowd grooving under the stars.

Entry is $50 and includes food, drinks and musical entertainment.

“Paradigm Gardens is a place that people can escape to after a long day or a long week,” Hitchcock Tilton said. “At night during the events, with the Tiki torches, the wood-fired oven and the goats, people feel as if they are way outside of the city. We are happy to provide a venue that lets people relax and get closer to nature. The guests enjoy the ambiance and the food. Most of our events are food-centered, and we work with a phenomenal team of member restaurants including Patois, Primitivo and Coquette, and a slew of other chefs who really enjoy the outdoor atmosphere and wood-fired oven and grill. Their energy and talent really shine through here.”

The upcoming Pizza & Pies dinner series that starts on Wednesday, March 15, and will take place every other Wednesday through May 24, from 7:00 p.m. – 9:30 p.m., is sponsored by Old New Orleans Rum and NOLA Brewing.

Hitchcock Tilton said Paradigm Gardens has partnered with Ancora Pizzeria to make “the best pizza and bruschetta this side of the Mississippi,” and Windowsill Pies will provide “delectable pies so delicious you'll think it's Thanksgiving at your grandma's house.” There will also be some ethnic offerings from The Pupusa Lady who will fry up her signature Honduran delicacies.

Tickets are $35 and include food, drinks and musical entertainment.

Each Pizza & Pies dinner will feature a guest chef or two contributing their culinary stylings to the evening, and the rhythmic mixes of some of New Orleans top DJs:

All Paradigm Gardens events are BYOB.

Hitchcock Tilton said his urban farm reaps the benefits of the close relationships he and partner Seely sowed with area restaurants Patois, Primitivo and Coquette. “All of these chefs from these restaurants respect fresh, local, natural produce, and they respect the work we put in which always feels good,” he said. “Coquette went as far as to print up postcards and commissioned two beautiful paintings of the garden that they display in the restaurant. In addition to the promotion that the restaurants get, they also co-develop our crop plan with us so that we can grow specialty produce specifically for their seasonal menus.”

While Hitchcock Tilton and Seely haven’t planted any seeds for a Paradigm Gardens expansion, business is growing. “Unfortunately our model is not really scalable,” Hitchcock Tilton said. “But we do have two other lots, generously provided to us by Dr. Brobson Lutz, where we have sheep, chickens, pigeons, a greenhouse, more produce and a composting operation, but these are more or less ‘secret gardens’ that only our chefs know about.”

The picturesque Paradigm Gardens is also available for private events from small intimate plated dinners of 15, to larger receptions of 50 or more.

Free gated parking is available in the St. John the Baptist Catholic church parking lot across the street.

“We have security for all of our events as well as gated parking,” Hitchcock Tilton said. “Besides that, we have video cameras.” 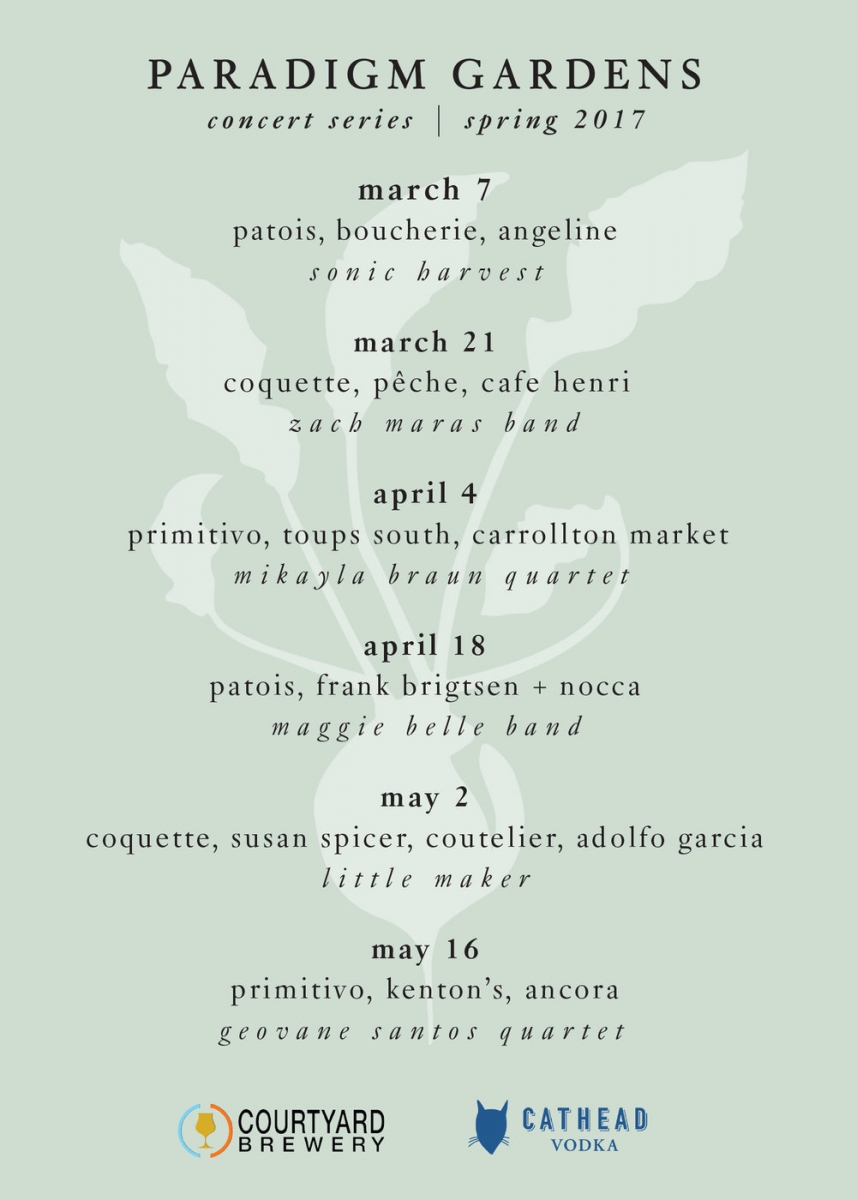 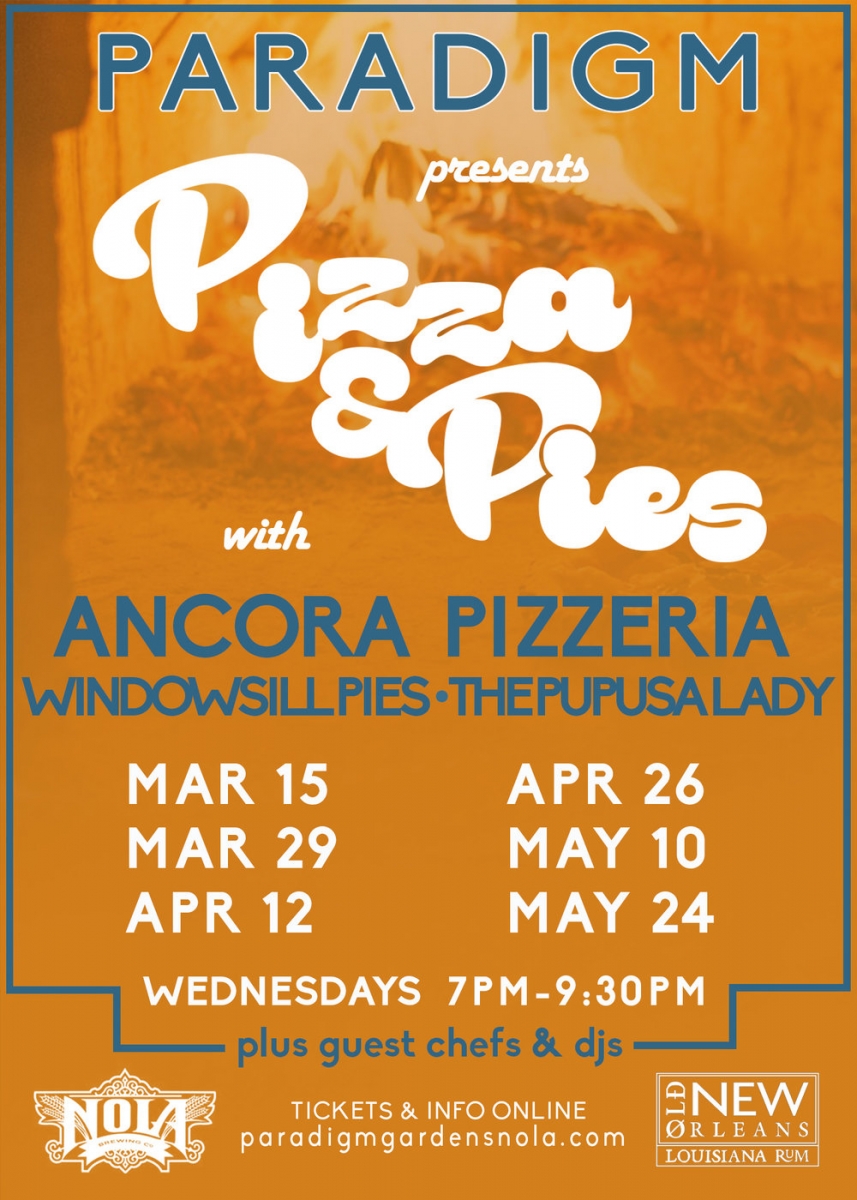