Both the largest health system and largest private economic development corporation in Louisiana have recently come under new leadership. Who are these leaders and what are their plans for the future?

After 10 years working at Ochsner Health, most recently as executive vice president and chief financial officer, Pete November was announced as the health system’s new CEO on Sept. 13, 2022.

The seeds of Pete November’s interest in the business of healthcare were planted at an early age. His mother was a nurse and his grandfather an accountant, making a career at the intersection of patient care and financial oversight a logical fit. In his new role as the CEO of Ochsner Health, November wears both hats, overseeing a growing organization of 36,000 employees who are caring for patients across Louisiana and Mississippi.

After completing both undergraduate studies in accounting and earning a law degree at the University of Kentucky, November went on to practice law, becoming a partner in the corporate healthcare group of Alston & Bird in Atlanta, where he represented healthcare companies in mergers and acquisitions, equity raises, and financing transactions. His work included representing Tenet Healthcare Corporation in the sale of hospitals to Ochsner Health after Hurricane Katrina and helping take Lafayette-based home health company LHC Group public. Along the way, November encountered [former President and CEO of Ochsner Health] Warner Thomas.

“We were on the other side of the table from each other, negotiating against one another, but we got to be friends and stayed in contact,” said November.

DID YOU KNOW? In addition to having a law degree, November is a certified public accountant, has taught at Loyola University College of Business, and serves on the board of trustees for the National World War II Museum.

In 2008, November moved to LHC Group, where he served as executive vice president, general counsel and head of acquisitions. In that role, he continued working with Thomas and Ochsner on various partnerships, and as Thomas prepared to take on the CEO role at Ochsner in 2012, he persuaded November to join the leadership team. Said November, “[At that time], I was sort of debating about what I wanted to do with my career… [Thomas] wanted to grow Ochsner, and he knew that was my background — working with high growth healthcare companies. So, he said, ‘Hey, why don’t you come join and help me do it?’”

That knowledge was tested by the unprecedented challenge of helping navigate the organization through COVID-19, an experience that reinforced to November the importance of a high-performing team.

“It’s not about who’s the CEO, it’s really about making sure you’ve got great people, which we do,” said November. “You see it time and time again, whether it was the pandemic or Ida last year — or Ida and the pandemic at the same time…  As the leader, you’ve got to make sure they’re supported. You give them the direction and let them go do what they’ve got to do.”

To meet the organization’s shared goal of making Ochsner the best place for physicians, nurses and other caregivers to practice, November is committed to providing the right resources, technology and culture. He wants to ensure Ochsner is a place where people feel, heard, appreciated, trusted and respected:

“That’s where they’re going to want to get up and come work every day, so I think part of my job is to make sure we’re always a place that has those characteristics.”

November acknowledges the need to stay ahead of technology that is constantly changing, and changing the way people operate:

Looking ahead, November hopes to focus some energy on his personal passion of helping the state and the region with economic development, taking advantage of Ochsner’s size and scale to influence positive change.

“I do feel a sense of responsibility and have a real interest in helping, whether government officials or business leaders, develop the economy of the state and region and make it stronger,” said November. “[That’s] not just business but also education and health. It all goes into improving the future of the region… We want to be a catalyst for that.”

Taking On a New Challenge

Walter “Walt” J. Leger III’s career has already included prominent roles in law and politics, and on Jan. 1, 2023, he will add a new industry to that list, moving into the top role in tourism promotion in the region — the CEO of New Orleans & Company.

Walt Leger believes timing is everything. In his latest position, leading the organization that spearheads public relations, sales, and tourism for the region, Leger’s experience made him the right person for the job at a critical moment for hospitality.

Leger has always sought to use his legal education to serve the community. He began his career as an assistant district attorney in New Orleans before transitioning to private practice. In 2008, he began what would be a 12-year tenure as an elected member of the Louisiana House of Representatives, representing New Orleans’ District 91.

As a legislator, Leger came to understand the value of tourism and hospitality to the state’s economy. When J. Stephen Perry, former New Orleans & Company president and CEO, approached Leger about joining the organization’s leadership, Leger said it felt like a natural step.

DID YOU KNOW? Leger was chosen by his colleagues to serve as Speaker Pro Tempore of the Louisiana House of Representatives in 2012 and 2016. He was the youngest member ever to hold the position.

“It was a compelling argument that was made as to how I might be able to use my experience and skills to serve the city in a different type of capacity,” said Leger.

New Orleans & Company (formerly the New Orleans Convention & Visitors Bureau) is a destination sales, marketing, and trade association for the tourism and hospitality industry. The membership-based private company has nearly 1,200 dues-paying members connected to the hospitality industry, from hotels and restaurants to linen service companies and entertainment venues. Leger is the fourth person to lead the organization since its founding in 1960.

Just weeks after Leger joined New Orleans & Company as the first executive counsel and vice president of strategic affairs in early 2020, the pandemic arrived, and with it a steep learning curve. Leger’s legal and political experience helped him navigate the contractual complexities of cancelled events while preserving relationships with partners and customers for post-pandemic activity. His legislative experience also helped Leger work with government and healthcare leaders to create reasonable regulations that would allow businesses to open and operate safely.

“All the varieties of experience I had had in previous employment were so quickly applicable to what we were going through,” he said. “It really expedited the learning curve, allowed me to dig deeper into the specifics of how the industry functions… and really wrap my arms around what is a very complex and competitive economic environment.”

Leger sees unlimited potential for tourism and hospitality in New Orleans based on strengths like the city’s unique culture, talented creative community, and status as an international port. He also cites assets like the Caesars Superdome, which hosts Super Bowls, Final Fours, and other major events.

“That makes a city of 385,000 people feel like a city that’s much larger,” said Leger. “It lets us loom large on the national and international stage in a way many cities envy.”

Leger wants to keep New Orleans top of mind for potential visitors (business and leisure, domestic and international — with a strong focus on international tourism, which continues to lag). To that end, he will prioritize public relations, helping to promote the city through third parties like social media influencers and journalists and reach broader audiences through emerging technologies like Web3 and NFTs.

Other priorities include continued support for investment in the New Orleans Ernest N. Morial Convention Center, which Leger believes is vital to keep the city competitive against the roughly 45 other convention centers vying for bookings.

“That’s why our external affairs team is so focused on partnering with members of our community and others to address quality of life issues, public safety issues and other important issues facing our community,” said Leger. “Ultimately, our members are the businesses that help make this city move forward… and employ close to 100,000 people across the region. Our work is so important to continuing the economic viability of the region… and we take that role very seriously.”

Tickets and Sponsorships for Lark in the Park Now Available 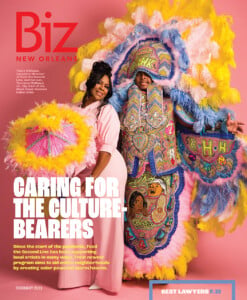