Tying It All Together

When you ask any New Orleans transplant how they came to live in our fair city, the story is almost always identical.

I came down to visit, fell in love with the city and decided to stay.

This story rings true for woodworker Robert LeQuire, who came to New Orleans in 2009 to visit a friend and found home here in the Crescent City.

LeQuire grew up in Connecticut but left home at 18 and then lived in Italy, France, the Caribbean and Las Vegas before coming to New Orleans.

“I kept searching for home,” he says. “Then I came to visit a friend and just immediately fell in love with New Orleans. I pretty much went back, sold my house, my car, and almost everything I had, and moved here two months after. I moved on a Friday and I met my now wife on the following Monday. I’d been here three days and then started to fall in love, so it felt like it was quickly confirmed for me that I was supposed to be here.”

LeQuire had been working with wood for years, but it was the need to simplify the ‘getting dressed for an event’ process that lead him to find his current passion.

“I always had a tough time tying my own bow ties,” he says with a laugh. “So I put a wooden bow tie together, just kind of as a joke, from scraps I had lying around the shop, and I wore it out to a party. It was quite popular, so I started making some more.” 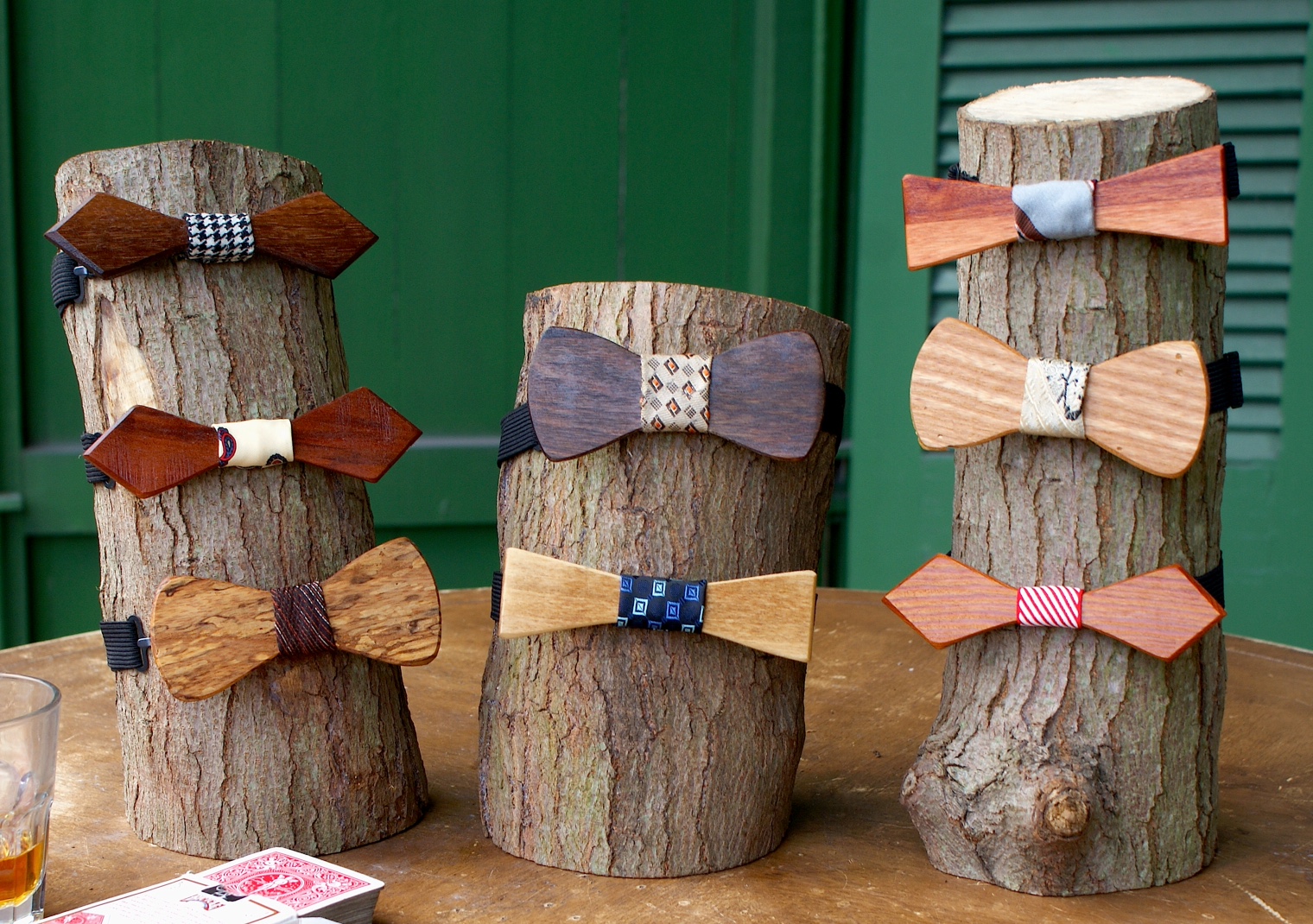 LeQuire was fortunate enough to be friends with accomplished furniture maker, Chip Martinson, the owner of Monkey wid-a Fez Furniture Gallery in the Bywater. Martinson has designed furniture for restaurants in the city like Pesche, Mondo, Coquette and Cochon Butcher. He invited LeQuire to work in his shop and even provided him with his initial materials to play with.

“He was gracious enough to kind of donate a lot of his scrap materials and donate his shop space,” says LeQuire. “So without him I could have never gotten started. I didn’t have the tools, the space, the materials and he was extraordinarily gracious with all those things that allowed me to test and play with ideas and not worry about major overhead to begin with.”

Once the product was perfected, to market he went!

“I signed up for the Frenchmen Art Market and the response was overwhelming and positive so I kept doing it. It was great!” says LeQuire. “The traffic that comes through there is extraordinary.”

LeQuire named his business South Haven Wood – a nod to his hometown of New Haven, Connecticut and his new home in the South. He finds that he sells mostly to tourists, but has had a few enthusiastic locals for costumers as well.

“It seems like the art market traffic is about 80 percent from out of town and 20 percent locals, and I’d say I definitely get a huge response from people that live around the city. They seem to love it because it’s reclaimed materials and because it’s wood from New Orleans.”

At this point, selling his ties is great, but meeting people, handing out business cards and introducing everyone to the wooden bow tie concept is his main goal.

“The biggest challenge I’ve had is convincing people that they’re effective, stylish menswear,” says LeQuire with a chuckle. “I think when I’m meeting people, I can almost see the connections in their brain trying to put it together. Like, ‘Okay, a bow tie…wood…a wooden bow tie. How does this work? How would this look on somebody? Is it a joke? Or is it serious?’ So like anything that’s fairly traditional in concept but has a twist on it, it makes it a different thing all together and it’s new for people.”

As for finding the materials each week, the expression one man’s trash is another man’s treasure whole-heartedly applies to LeQuire’s work.

“On any given week, I’ll sort of scour the city as I’m moving around and I keep an eye out for construction sites, or wood items that people are leaving out on the street,” he says. “The only rule I really have is it has to be reclaimed wood from New Orleans. So I might go to The Green Project, where they have salvageable materials, or my buddy’s shop, or even walk around the city finding it in old abandoned houses. The fact that I’m using reclaimed wood really cuts my cost on the materials. It becomes kind of a labor of love. What I save in material cost I make up for in the time that I have to work to get the materials to a place where I can use them.”

The labor of love seems to be paying off. Now, ten months into his business venture, LeQuire has a successful Etsy shop and can be seen most weeks at the Frenchmen Art Market. He sells an array of different wooden bow ties, (perfect for any fashion-forward grooms and groomsmen out there,) and he also crafts neckties.

As for the future, LeQuire is hopeful and excited to start approaching men’s clothing shops in the next year.

“The first year was really about seeing if I can stand on my own two feet,” he says. “And then if that’s successful, reassess and reevaluate and see if I can branch out beyond the art market and online.”

To Check out Robert LeQuire’s wooden bow ties, visit South Haven Wood on Etsy or at the Frenchmen Art Market. And to watch Robert in action, don’t miss this segment from WGNO News.

Infrastructure Plan: $33M to Clean Up Hundreds of Oil Wells