he Port of New Orleans launched a new campaign in September designed to address the universal issue of trash, litter and debris and to prevent it from reaching our waterways.

Coordinated by the Port’s Environmental Services Department in collaboration with the U.S. Environmental Protection Agency, Port tenants and community stakeholders, the campaign slogan is “Keep it Clean! Your Port, Your Water, Your NOLA.”

The Port kicked off the campaign with a series of events and giveaways during National Truck Driver Appreciation Week Sept. 14-18. Port environmental staff hand-delivered re-usable water bottles, re-usable trash receptacles and other items with the “Keep it Clean” branding to truck drivers and Port workers at the entry to the Clarence Henry Truckway, a dedicated two-lane roadway on Port property.

The “Keep it Clean!” campaign was promoted on specially designed traffic signs, banners, yard signs, bumper stickers, trash can stickers, the Port website and social media. Cruise passengers and visitors to the Port’s Administration Building were also reminded of the campaign to create broader awareness and participation. The slogan was also added to the Port’s new electric vehicle fleet, replacing the word “Water” with “Air” in a nod to the low emissions and work the Port has also done toward cleaner air.

“Our waterways are a public asset and the Port of New Orleans is proud to take a leadership role, along with our stakeholders, in promoting environmental awareness in the maritime industry and beyond,” said Gary LaGrange, Port President and CEO.

The collective spirit was part of the campaign from the early planning stages. The Port initiated a stakeholder process in December 2014 as a pilot project for the U.S. EPA Trash Free Waters initiative. The process included convening a task force of port staff, port tenants and operators, local, state and federal government agencies, community organizations and other local institutions with an interest in environmental protection and innovation. In all, there are 25 stakeholders on the task force, including entities such as the City of New Orleans and Nicholls State University, and businesses such as terminal operators Ports America and TCI Trucking. The taskforce held three workshops and multiple focus groups over the course of six months to create and implement the campaign.

Amelia Pellegrin, the Port’s Environmental Services Manager, credits this collaboration for the success of the campaign.

“It was critical that we designed the campaign with the trucking and industrial stakeholders, and not for them,” said Pellegrin. “Their input was key to creating the messaging and designing the methods of communication as well.”

The Port established baseline data and identified trash “hot spots” on port property. An inventory of litter and debris informed the strategic placement of new waste receptacles at the Port, as well as providing re-usable in-cab receptacles for truck drivers.

A Louisiana-based design firm, JCW Productions, was hired to work with the taskforce to design the slogan and logo, incorporating the Port’s brand standards. An interpretation of the Port’s standard fleur de lis using a blue water droplet and green leaves was approved and placed on all collateral pieces. The “Keep it Clean! Your Port, Your Water, Your NOLA” verbiage was carefully crafted to encourage personal responsibility and ownership in the reduction of aquatic trash and debris.

Pellegrin said the Port will continue to do trash and debris cleanup events that bring together the various stakeholders in the community. The Port is currently planning an Earth Day event, and a new stormwater art program is in development to continue environmental outreach and education. 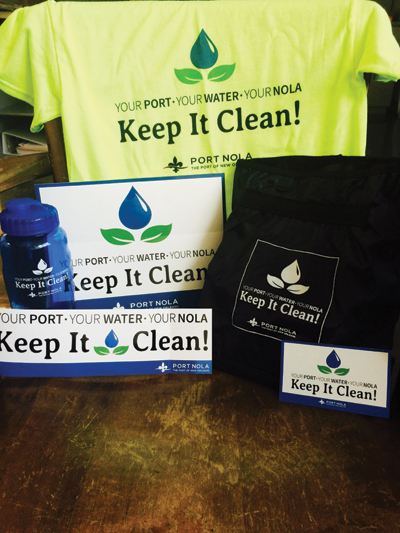 A variety of items including re-useable water bottles, trash bags and bumper stickers were designed for the campaign.