Transportation Center Of The Americas

The state legislature established the Port of South Louisiana in 1960 to promote commerce and industrial development along the 54-mile stretch of the Mississippi River that runs through the St. Charles, St. John and St. James tri-parish regions. 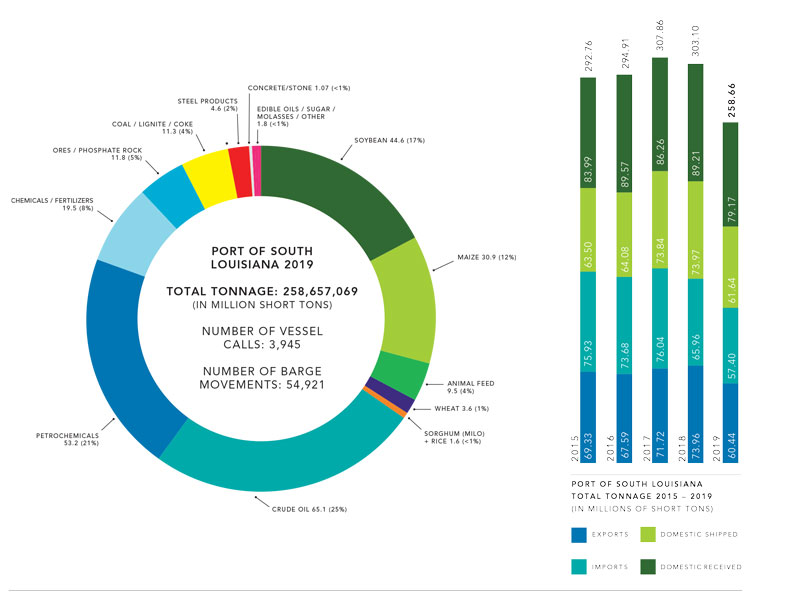 MISSION
The Port is charged with a mission to promote maritime commerce, trade and development, and to establish public and private partnerships for the creation of intermodal terminals and industrial facilities.

GOVERNANCE
The Port is under the jurisdiction of the state of Louisiana and authorized by the state constitution. A nine-member board of commissioners directs the Port; all of them are unsalaried.

PHILOSOPHY
The Port’s philosophy of development is to entice companies to set up regional operations within its boundaries. The Port serves primarily as a “landlord” port to more than 30 grain, petroleum and chemical companies. The exception to this is the port-owned world-class intermodal Globalplex facility SoLaPort, and the St. James Westbank property.

FACILITIES
Within the Port’s jurisdiction, there are seven grain elevators, multiple midstreaming operations, more than 40 liquid and dry-bulk terminals, the Globalplex Intermodal Terminal and the Port’s Executive Regional Airport.

PORT AREA
The Port covers a 54-mile stretch of the lower Mississippi River between New Orleans and Baton Rouge. The Port begins at river mile 114.9AHP near the Louis Armstrong New Orleans International Airport and winds through St. Charles, St. John the Baptist and St. James parishes. It continues north to river mile 168.5AHP just north of the Sunshine Bridge.