The U.S. leader in cargo volume, the Port of South Louisiana is drawing billions in capital investments from foreign companies, and experts say this is just the beginning.

Headquartered in LaPlace, the Port of South Louisiana stretches across three River parishes — St. James, St. John the Baptist and St. Charles — in a Mississippi-hugging 54-mile stretch between Baton Rouge and New Orleans.

But while Louisiana’s three largest ports all experience high traffic— each at a convergence of well-patronized river, road and rail transport — even with its rural posting, the Port of South Louisiana exceeds its big-city neighbors in Baton Rouge and New Orleans in world trade.

In 2013, the port ranked No. 6 on a list of Top 10 Global Ports published by Supply Chain magazine, edging out major ports in the United Arab Emirates, Western Australia, Germany and the United Kingdom.

“I’m so very pleased and excited about the record-breaking tonnage figures,” says Paul Aucoin, executive director of the port. “They illustrate the port’s vitality and the importance of the port and the river region to our state and our country.”

The past year’s numbers shatter not just the port’s individual record but also a tonnage record for the entire country.

“We also have the second-largest foreign trade zone,” says Aucoin. The port’s $48 billion in foreign cargo handled is only bested by the Port of Memphis; Aucoin attributes that ranking to FedEx running its North American operations out of that city.

On the whole, grain, chemicals/fertilizers and crude oil lead the increases in the Port of South Louisiana’s cargo, with the most dramatic spikes in the past two years seen in the exports of crude oil — which experienced a whopping 1,783 percent growth from 2012 to 2014 — and chemicals/fertilizers, which increased during the same time by 753 percent. 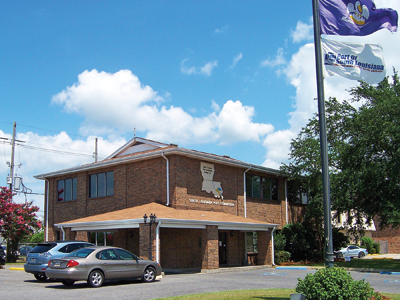 The Port of South Louisiana headquarters in LaPlace.

According to the Ports Association of Louisiana, one out of every five jobs in the state owes its existence to the state’s port system. Together the 16 inland river ports, 6 deep draft ports and 9 coastal energy ports generate $20 billion in personal earnings dispersed through 400,000 jobs.

The Port of South Louisiana, a deep draft port, contributed jaw-dropping numbers to the state’s economy between 2009-2013, according to an economic impact study published by Loren C. Scott and Associates (see chart/pullout).

The economic boon created by the port has far-reaching effects.

“Imagine an economic pond,” explains Dr. Loren C. Scott, of Loren C. Scott & Associates, which published a recent economic impact study on the port. “If you drop this rock called ‘PSL industries and jurisdiction’ [in the pond], the biggest splash will occur where the rock is — in those three parishes containing the port. But the ripple effects go all out across the state.”

Specifically, the state can attribute $15.1 billion in sales between 2009 and 2013, along with an estimated 24,506 jobs, to Port of South Louisiana companies.

The mere existence of the Port of South Louisiana draws businesses to the state, lured by the well-established infrastructure and access to international transportation. One such company is Kongsberg Maritime — a Norwegian technology company and offshoot of the conglomerate Kongsberg Gruppen. In January, the company purchased 5.2 acres in St. Rose. Kongsberg intends the acreage, located in the port’s James Business Park, for an 82,890-square-foot office and training facility, with room left over for future expansion.

Kongsberg has operated a service facility out of James Business Park since 2003. The company currently occupies 35,000 square feet with 110 employees.

According to Kongsberg President Jon Holvik, faith in the Gulf of Mexico market propelled the company to increase its presence at the port, undeterred from the large investment by the dipping offshore markets. “We believe the market will bounce back as it always does,” he says.

Last summer, Yuhuang Chemical announced a $1.85 billion capital investment at the port with plans to erect a methanol manufacturing complex.

“That’s the first Chinese company to locate within Louisiana,” says Aucoin. “We’re very proud of that.”

At the methanol complex, Yuhuang estimates salaries will average around $85,000, a significant increase over current port salaries, which average between $55,000 and $65,000. Over 400 jobs at the company are planned, with indirect jobs expected to number over 2,300.

Following the news of Yuhuang Chemical’s investment, Paris-based company Air Liquide announced a $170 million investment to provide oxygen supply to the complex, installing an air separation unit on the premises to produce oxygen, nitrogen and argon. 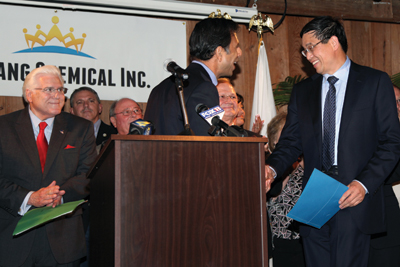 As to why the Port of South Louisiana looms larger in the international market than its riverside neighbors, Paul Aucoin points back toward the Mississippi River. The Port of South Louisiana claims a 54-mile stretch of the stream; 108 miles counting both banks. “There just aren’t as many miles or property at [the Ports of] New Orleans and Baton Rouge,” says Aucoin. “It’s a matter of who has land available, and we do.”

The Port also provides its tenants access to low-cost natural gas in deep water. “We expect a plentiful supply of natural gas for the next 20 years, if not longer,” says Aucoin.

Among the thrilling rush of new business and incoming investments, Aucoin allows for a sobering concern: Does Louisiana have the manpower to accommodate this robust growth?
To quickly expand the pool of local applicants in the region, the nearby River Parishes Community College and South Central Louisiana Technical College have opted for an educational express lane.

“The colleges are working together to start a special program for a P. Tech [Professional Technologist] certification for students who already have four-year degrees,” says Aucoin.

The idea for the “P. Tech Express” was gleaned from SOWELA Technical Community College in Lake Charles. (With the arrival of Sasol North America, a South African energy plant that will invest upward of $70 billion in the Port of Lake Charles, Southwest Louisiana has its own expanse of jobs to fill.)

“You’ve got students who have already finished a four-year degree,” says Doty. “They know what has to be done to finish an academic program.”

After just 16 weeks (and still earning 38 credit hours), students are primed for a position at the Port.

“It costs as much for those 38 credit hours as two years [of traditional schooling],” says Doty, “but you’ll be out in six months earning $25 or $35 an hour at the plants.”

According to the port’s recent economic impact study, what we have seen thus far is just the beginning.

In calculating the potential investments and expansions on the horizon, the study estimates a total of $12.8 billion in construction capital will be entering the region.

“You’re going to find that your ability to provide better roads, better schools [will be] enhanced by these firms coming in,” says Scott.

Aucoin hints to stay tuned. “We expect three to five more big announcements in the next year.”

BY THE NUMBERS
from 2009 — 2013, the Port of South Louisiana contributed to the regional economy to the tune of:
• $7.2 billion in construction spending
• $8.7 billion in operational spending
• $10.4 billion in sales
• An average of 9,920 jobs per year
• $87.6 million in indirect sales taxes for local governments 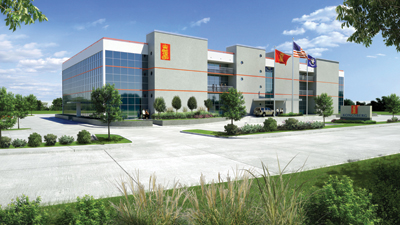 Kongsberg Maritime will model its new Louisiana Technical Support Center in St. Rose after the center the company has at its headquarters in Norway.