NEW ORLEANS – Despite the Morial Convention Center’s pandemic-related money challenges, tourism chief Stephen Perry said during a Biz New Orleans podcast interview this week that it’s more important than ever to continue with the center’s planned improvements and developments. 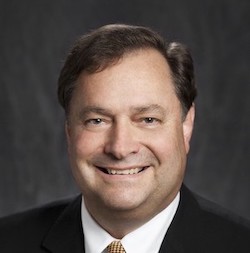 “We have an unprecedented opportunity,” said Perry, the president and CEO of New Orleans & Company, the destination marketing organization that sells the city to business and vacation travelers. “The American meeting industry is changing and evolving with new technologies and new layouts right at the moment we’re going through a new capital master plan. That’s the best thing that could have happened for us because we’re in the process of working with our architects and designers and our meeting planner customers to identify the changes that will be a part of the evolution.”

For years, Convention Center leaders have been planning improvements to the existing facility with an estimated price tag of more than $500 million. Next door, private developers have been planning to build a 1,200-room hotel with assistance from public subsidies. The cost: somewhere near $700 million. Further upriver, there are also plans for an entertainment district on land owned by the Convention Center.

These projects have had their share of supporters and detractors over the years but COVID-19 has changed the financial equation.

Since the pandemic began, nearly 100 events scheduled to take place at the Convention Center have canceled. There are nearly that many still on the books through the end of 2021 but some of those are likely to cancel as well depending on how long the crisis continues. In addition to losing income from those bookings, the center is also only receiving a fraction of the revenue it normally gets from its share of the city’s hotel tax. This week, a financial backer of the hotel project pulled out of the deal because of the financial uncertainty.

The Bureau of Governmental Research, a nonprofit watchdog, said all this should cause champions of the project to change course.

“The decision by a private financial firm to pull out of the convention hotel project is a clear acknowledgment of the uncertain future for the convention industry post-pandemic,” said Amy Glovinsky, BGR’s president and CEO. “The Convention Center should similarly acknowledge this uncertainty by committing to reassess the feasibility of a hotel project as BGR recommended in our report earlier this year. The center should also reassess the necessity and scope of other major capital projects. This includes more than $500 million in renovations to the center and the proposed mixed-use development adjacent to the hotel site. It is imperative that the Convention Center also find ways to reduce its expenses during this downtime to mitigate the rapid spenddown of its taxpayer-funded reserves.”

Perry, however, said now’s not the time to back away from the projects. In fact, he said, the city’s ability to bring in tourism revenue in the future relies on the center staying competitive with facilities in Nashville, Atlanta, Las Vegas and other cities that vie for business.

“We have a wonderful center but the reality is we were already 10 to 15 years behind our competitors,” he said. “Our center is a grand old box and it has a lot of great features and we were still able to book an amazing level of business in it but our competitors were starting to get the edge on us and, in business, if you stand still you lose.”

Perry said there is an opportunity for tourism leaders to do some “fundamental rethinking.”

“We’re not only going to be doing tremendous renovations and bringing in new light and the things we’re doing on Convention Center Boulevard, but we’ll [reimagine] additional outdoor space, the way that meeting rooms will break out, the way that technology will be used. We’re going to be able to involve the best thinking in America from our customers and designers as we create one of the top two or three centers in the country.”

Experts say it’s going to take until 2024 for New Orleans to rebuild its visitor economy – but even when that happens, the meetings business is going to look different than it did before the pandemic.

“It’s absolutely inevitable and if you don’t recognize that you’re going to make a serious error in planning,” said Perry, who said he talks to scores of meeting planners nationwide every week and all of them are brainstorming new ways to meet.

“Obviously, safety protocols are going to be of the highest importance for the next few years,” he said. “We anticipate the development of hybrid meetings – they will be part virtual, part in person. You might have fewer exhibitors, almost certainly have fewer attendees at least in the next year. What we don’t know yet is the outcome: we don’t know yet how meetings and conventions are going to evolve.”

Pluck Wine Bar to Open in March in the Warehouse District

Episode 43: Pandemic Primates — A look at the critical role the Tulane National Primate Research Center is playing in the fight against COVID-19