A look at how changes to this program are impacting local students and universities.

This spring semester is going to present a struggle for thousands of university students across Louisiana.

Last year, Gov. John Bel Edwards and the state legislature announced they were unable to find the money to cover the full cost of the $300 million program. Cuts began last fall, leaving TOPS students responsible to cover 6 percent of their tuition. The government gave families six months to prepare to cover a larger cut set for the spring, when TOPS students would have to cover more than half of their tuition bill. This amounts to a $90 million cut.

When the cuts were announced last year, public and private institutions braced for the impact they would have on enrollment. Students who relied on TOPS funding to cover their tuition were told (or required in some cases) to seek other forms of federal funding. Another suggestion was to delay the use of their TOPS scholarship by a semester in the hope that full program funding would return for the 2017-2018 school year.

As of January, enrollment numbers at most major universities had yet to be announced.

At the University of New Orleans, 1,600 students use TOPS dollars to cover tuition. UNO President John Nicklow says the school has been preparing for these cuts for over a year and has been working with TOPS students to source federal grant funding to cover any gaps in tuition.

“We started planning for this and making changes to how we awarded funding a year before this,” Nicklow says. “We wanted to make sure that any student who had financial aid also applied for FAFSA (Free Application for Federal Student Aid). By requiring that from the student, we essentially maximized the amount of federal dollars that students were able to access and get them Pell dollars.”

Approximately 35 percent of undergraduate students at UNO receive Pell Grants, money provided by the federal government to students for college tuition. Since it is a grant and not a loan, it does not need to be repaid. Without the help of the Pell Grant, UNO students would have to cover an additional $1,770 this semester.

Filing a FAFSA application in conjunction with a TOPS application was not a requirement before the cuts last year.

“The idea in short is to go after other sources of aid,” Nicklow says. “Pell is just one federal grant. Previously, if a student was getting TOPS and did not file a FAFSA they would have been susceptible to the TOPS cuts. Ultimately it would also have hit those institutions that serve middle- and low-income students the worst.”

The TOPS scholarship is one of the most generous programs of its type in the country. Until last fall, it covered the entire cost of tuition for Louisiana students who had graduated from high school in the state and had a GPA of 2.5 in core classes and at least an average score on their standardized tests. The program was designed so that students who attend a public school could receive enough money to cover their full tuition. The program also has an incentive to provide extra funding for students with higher grades and test scores.

TOPS was originally founded to help low-income students afford college; however, the program expanded to serve students from any economic background. About 41 percent of TOPS recipients are from families with average annual incomes of $100,000 or more.

Louisiana State University in Baton Rouge has also instituted a similar strategy to help students cover their tuition this spring by prompting them to fill out federal student aid applications.

Spring tuition for a TOPS student at LSU without the help of the scholarship will be approximately $3,819, according to LSU’s financial aid website.

Similarly, at the University of Holy Cross, the office of financial aid was asked to notify students of the expected reduction in funding prior to registration for the Spring 2017 semester.

In the 2015-2016 academic year, the University of Holy Cross disbursed TOPS funding to 119 students, amounting to $584,011 in funding, according to Hayden Wagar, director of financial aid at the university. So far this school year, 135 students at the university are receiving the reduced TOPS tuition benefit, at about $485,136, a nearly $100,000 difference in funding.

Wagar says that students are additionally encouraged to seek out both outside and institutional scholarship opportunities. The university offers a tuition payment plan in which students can make payments toward their tuition. 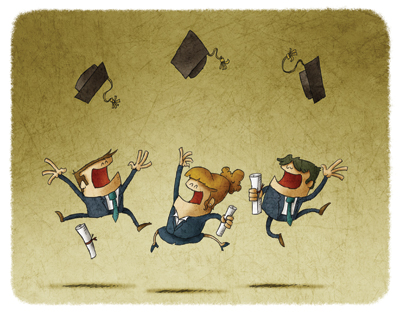 Unfortunately, she says this is only a short-term solution, and the cuts to the TOPS scholarship have “the potential to forever change the landscape of higher education in Louisiana. Students will ultimately have no choice but to utilize both federal and private student loans when seeking to obtain a college education.”

Federal student loan funds carry annual limits related to a student’s year in school and dependency status. In many cases, Wagar says the annual limit for a first-time freshman is not enough to cover the full cost of tuition and fees.

“Students are then faced with Parent PLUS loans and private student loans, both of which are credit-based options,” she says. “These credit-based loans become problematic for families with poor or no credit, in that, when the loan is denied, few options remain.”

It is unclear at this point whether the TOPS program will be fully restored for 2017-2018 . When Edwards signed the TOPS change into law last May, he said that the Legislature would likely need to raise more money either through tax increases or the rolling back of existing tax credits to fund the scholarship program fully.

In November, Edwards announced that the state is still facing a $315 million midyear budget deficit, and higher education could face yet another cut of $18 million to deal with the shortfall.

In order to make TOPS more affordable in the long run, advocates argue that a financial requirement should be added to qualify for the program.

Advocates for the TOPS program, such as the Louisiana College Access Coalition, have promoted the idea of restructuring TOPS scholarship to make sure low-income students continue to have access to the program. They have proposed a tiered system that would give students from higher-income families less money from the scholarship fund than those from poor families.

The group has said this structure would in the long run save the program money while making sure every qualifying student can still access funding.

Douglas Harris, an economics professor at Tulane University and the founder of Education Research Alliance, shares a similar perspective. Private institutions have not been as impacted by the cuts to the program as public institutions. Students who go to private colleges are eligible for TOPS, but the scholarship does not cover their full tuition bill.

Tulane University currently has 657 students who expect to receive TOPS payments from the state for the spring semester. The total cut for semester ranges from $162 to $185 per student.

Harris said that changes to the program should focus on economic needs and not on changing the academic requirements necessary for qualifying for the scholarship.

Over time, TOPS scholarships have shifted from their original goal of helping low-income students to achieve the more expansive goal of keeping college-educated residents in the state and boosting the economy. In order to do this, the state removed the economic requirement opening the program to students from any socioeconomic background.

The problem with this structure, Harris said, is that TOPS has had little shown effect on whether college graduates awarded TOPS funding stay in Louisiana.

Harris suggests that program should be restructured to serve its original purpose and award full funding to students from families with incomes below $50,000 a year and gradually smaller awards to families with higher incomes. He suggests that this structure could save the state at least $100 million a year.

In an op-ed he wrote for The Advocate, Harris said that as “Louisiana emerges from the current fiscal crisis these saved funds could be reinvested in colleges and universities to help offset the massive cuts to higher education over the last decade.”

Louisiana colleges and universities have dealt with nearly $800 million in budget cuts over the past decade already.

Harris argues that restructuring the TOPS program to require higher academic standards would shut people out from accessing college.

“We already have standards set in place requiring students to get into college and do well in school. We have this huge income disparity in the state. If the goal of the program is to get more students through college we need to target the funds to the students who need it the most. We need to add an income requirement.”