The Craft beer boom is finally hitting the Crescent City

In New Orleans, we sit around bars — some of us talking to our neighbors, some of us staring at a random sport or episode of “Jeopardy!” on TV. We like to crowd into the hot spots downtown or the quieter joints just down the street. There are many variables to entertain, but usually one constant: beer.

For a city synonymous with drinking, festivals and always being ready for a good time, New Orleans has surprisingly been behind the drinking curve when it comes to the ever-growing craft beer movement that has swept the nation.

The national numbers are astounding, harkening back to the buzz of coffee shop openings in the late ’90s, when it seemed like Starbucks were opening up inside other Starbucks. In 2012, there were 2,401 craft breweries in the United States. Over the next three years, that number skyrocketed, hitting 4,225 by the end of 2015.

Denver has more than 50 breweries in its city limits alone. Seattle, and the surrounding King County area, is dotted with 91 craft breweries. Even smaller cities such as Cincinnati and Charleston, have breweries in the double digits.

Yet you, dear New Orleanians — sitting here reading this, enjoying your pint — only have four microbreweries and two brewpubs in the Crescent City to enjoy that delicious, locally made hoppy IPA or smooth ale. And even though New Orleans — a town fiercely loyal to uniqueness and individuality — prides itself on bucking national trends, in this instance, the city is poised to follow a path that is steadily becoming well worn.

BACK IN THE DAY

New Orleans was once known as the brewing capital of the South. The late 1800s saw an explosion of local beer production as the city had 30 breweries in operation. You still see some of the names —Jax Beer, Regal Brau — in faded paint, dotting the city landscape. Falstaff Brewing, though not a local brewery, was a major local employer, opening its doors in 1936. The building and its smokestack still tower over South Broad Street as a reminder of the city’s brewing heyday.

Dixie Brewing Co. began operations in the city in 1907, and Abita Brewing Co. would open up shop on the Northshore in 1986. Those two outfits were the only local beers one could find in a city dominated by the ubiquitous lagers made by Anheuser-Busch and Miller. After Hurricane Katrina ravaged Dixie’s production facility on Tulane Avenue, the brewery would move its operations north.

The re-emergence of the New Orleans brewery scene all started at the Mayfair Lounge in Uptown. Whereas a lot of folks find their inspiration in a bottle, Kirk Coco, founder and CEO of NOLA Brewing Co., found his on the side. Coco, though not the biggest fan of Dixie beer, was drinking the famous lager because it was local. Or so he thought.

“After awhile I looked down and read the label of the beer, as you do,” Coco says. “And even though, to this day, it still says ‘New Orleans beer’ on the label, on the side it said, ‘Brewed in Wisconsin.’ I had another one, but once I knew it wasn’t from New Orleans, it just didn’t taste as good.”

Coco, who served 11 years in the Navy, had returned to town after the storm with a little bit of Uncle Sam’s money burning a hole in his pocket, and he was looking to start a business.

“Most of our ideas came from that first night at Mayfair,” Coco says. “We drew out the logo on napkins.”

Sometimes the plans you make at bars with your friends actually work. Nola brewery opened its doors in 2008 and has never looked back, with sales increasing every year. But even with its early success, it sat alone.

However, in 2015, legislation was passed allowing taprooms to sell up to 250 barrels a month, or 10 percent of the monthly production, whichever was greater.

“I think that piece of legislation will singlehandedly change the local beer industry,” says Jacob Landry, CEO of Urban South Brewery, which opened in March. Sitting at a wooden picnic table in the 20,000-square-foot facility, he continues, “Under the previous law you had to immediately go big volume-wise and equipment-wise to make any money. Being able to sell 10 percent of your monthly production makes sense if you’re Abita, but it doesn’t really help the small craft brewer.” 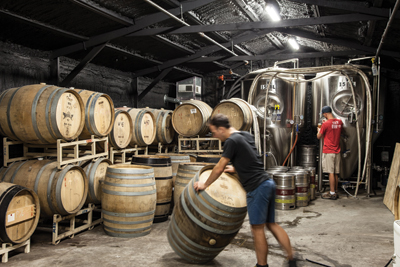 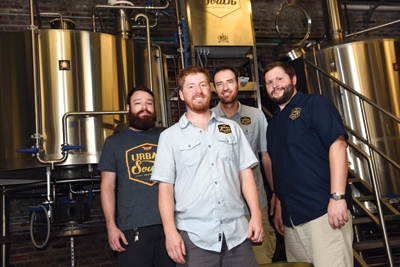 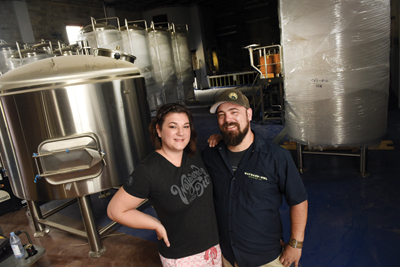 But with the change, craft brewers could sell beer directly to consumers from their taprooms, and develop a vital, second line of revenue with high margins. This allows a brewery to start off, as Landry puts it, “taproom-focused, and distribute your beer slowly. The retail margins subsidize your wholesale stock.”

The change in the law spurred interest and new breweries looked to join the New Orleans scene, and become part of a statewide industry ranking 49th in the country for breweries per capita. Parleaux Beer Lab in Bywater, Port Orleans Brewing Co. on Tchopitoulas, and Brieux Carre Brewing Co. in the French Quarter are on the horizon, where they will join local breweries Second Line Brewing in Mid-City, and 40 Arpent Brewing Co. out in Arabi in an ever-expanding roster of local labels.

Coco, sitting in front of a chalkboard showing NOLA’s footprint across the South, postulates, “Louisiana can support 40 to 45 breweries statewide. Only one out of every 10 beers sold in-state is a craft beer. In Washington state, about 45 percent of sales are craft.”

In Central City, Justin and Kristin Boswell, co-owners of Wayward Owl Brewing, have taken over the historic Gem Theater and plan for a late summer opening.

Justin, emblematic of the dedication and passion needed to exist and thrive in this industry, began his brewing career after Kristin insisted they max out a credit card to send Justin to brewing school. That move, along with a series of interviews, helped Justin land a job at Black Raven Brewing in Redmond, Washington, in 2010, where he started at the bottom, “scrubbing floors and not making a lot of money.”

But he was happy with his work for the first time in a long time.

“It’s amazing what following your passion can do for you,” Justin says. He would work his way up to being one of the main brewers for the company, but the Lafayette-born Justin had bigger plans. He wanted to come home to open his own brewery.

The cost of admission to the craft brewery game comes with a large price tag. Boswell rattles off the prices of bright tanks, a mash kettle, hot and cold water tanks.

Kristin, in charge of the money side of the business, adds that the shipping cost was another $20,000. As always, you have to work for opportunity and it pays to have the help of some friends.

Justin says, “If it wasn’t for the help of Scott Wood [co-owner of Courtyard Brewery with Lindsay Hellwig] a lot of voices would have been lost.”

A DIFFERENT KIND OF PLACE

The Courtyard Brewery holds a unique position on the local beer scene. As a craft brewery that doesn’t offer wholesale, craft beer fans can not only imbibe in Courtyard’s creations at the brewery, but also drink beer from other breweries across the nation. It’s a model Owner Scott Wood is comfortable with, after having watched Ballast Point Brewing and Pizza Port Brewing in his hometown of San Diego become wildly successful. But it didn’t come easy.

In the face of negativity and people telling him he couldn’t open a new type of brewery, Wood dug into the Alcohol and Tobacco Control law book, to see exactly what it said. 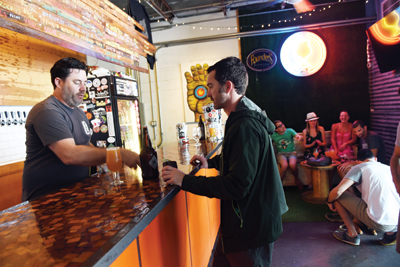 San Diego native Scott Wood (left) opened Courtyard Brewery — a taproom and brewery that serves its own, and other craft beers — at 1020 Erato Street in Central City in October of 2014. Photo Cheryl Gerber

And yet another overnight success story — which took two and a half years — was underway.

“I would call the ATC lawyers and ask, ‘Am I allowed to do this?’ Every time they said ‘Yes,’ I would have them put it in writing,” he says. “With the new Comprehensive Zoning Ordinance there is almost a blanket ‘OK’ to pop up any size of brewery within the city limits, within reason.”

A craft brewery, big or small, does not exist in a vacuum. It touches the community surrounding it and beyond. Courtyard Brewery is a vital link in the burgeoning scene on Erato Street, connecting Barrel Proof and French Truck Coffee on Magazine Street to the newly-opened Bakery Bar on Annunciation Street. Instead of drab buildings drivers pass without a thought, folks look forward to and bring their friends to another piece of the city.

Tchoupitoulas, a road that stretches along the river for miles with its bustling wharfs and rows of warehouses, is never going to be mistaken for Miami’s glitzy Ocean Drive, but being inhabited by NOLA Brewing and Urban South has added some sexiness to the area.

But it’s not just real estate — they work with other local companies as well. NOLA Brewery now houses McClure’s Barbecue restaurant. Urban South’s website was created by RapJab, and their embroidered shirts are made by Orleans Embroidering. Wayward Owl works with Go Mango Neighborhood Restoration.

Nationally, craft beer saw a 16 percent sales growth in 2015, totaling $22.3 billion in sales. On the other hand, “big beer” a.k.a. Anheuser-Busch InBev and MillerCoors sales growth has gone stale.

As craft beer has chiseled in on big beer’s market share, the empire has responded on a couple of different fronts. The most surreptitious example is the purchase of once-independent craft breweries like Goose Island, Breckinridge Brewery and Leinenkugel. Budweiser also owns 32 percent of the publicly traded and craftily named Craft Beer Alliance, which owns popular titles such as Kona Brewing and Redhook Ale Brewing. 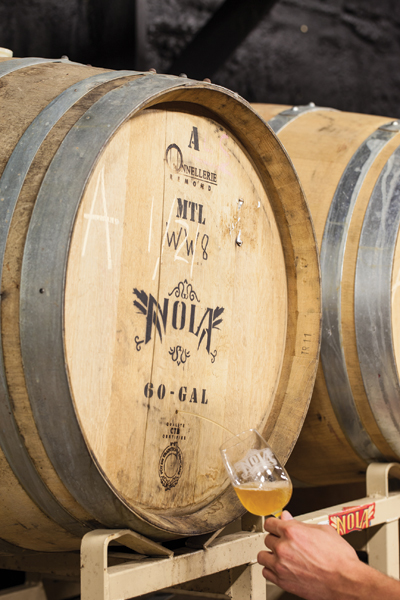 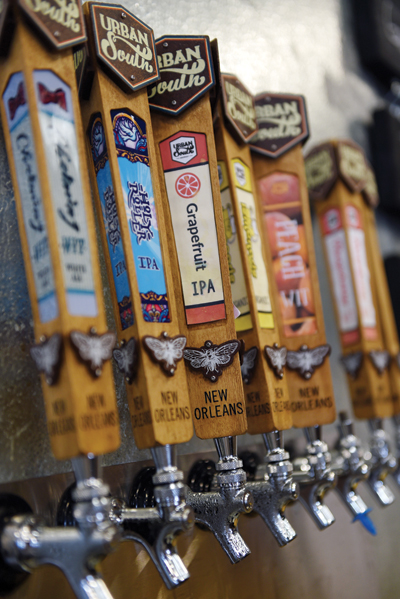 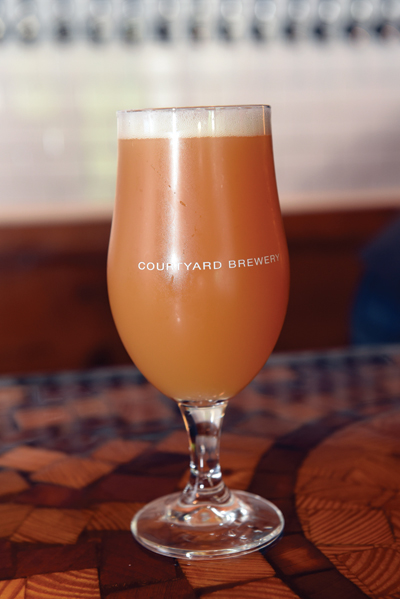 Just like Coco’s realization that night at the Mayfair, the craft beer you’re enjoying might not be so crafty at all. After big beer snaps up a craft brewery, Landry says, “They take out the high-volume beer and brew it in St. Louis. So it’s no longer local. The jobs aren’t local.”

“They’re targeting regional breweries that have a large footprint — it’s success by acquisition,” says Wood. “They’re not going out of business, but they’re in a long, slow decline.”

AB InBev has struck on another front to prevent that decline, by offering incentives to its distributors to amp up sales of Budweiser products. The mega-brewer sent a chill through the craft-brewing ranks after it introduced a plan that could pay independent distributors up to $1.5 million annually if 98 percent of yearly sales are AB InBev products.

With a touch of defiance, and a large dose of common sense, Wood says, “Without linking arms with your brothers and sisters, we’re all going to get destroyed by Budweiser and MillerCoors.”

That brotherhood and sisterhood of craft beer making is upon New Orleans. Kirk Coco’s scribbles at the bar reignited, however slowly, an industry that at one time ruled the city. And Coco, in the pervading spirit of the scene, lent a helping hand to the newcomers to the local scene.

The Boswells, standing inside the Gem Theater, put it best. Kristin says, “In a city this size, it could be dog eat dog.” Picking up on her thought, Justin adds, “But that’s just not craft beer.”

Craft Beer: In the Beginning There Was…

Then the Boom Hit…

And More are on the Way…