In the midst of dueling hurricanes, a pandemic and just way too much stress, today I offer a bit of hope for the future. Let me introduce you to The Color Company.

Ava Carrigee is the marketing director, Abby Duvoisin is the accountant and Lucy Chisesi is the CEO. Charlee Brown is the co-owner and Jane Riley is the business manager.

“But we all do a little chip of those jobs,” Duvoisin points out.

The business partners have been friends since pre-k and are all going into fifth grade at Metairie Academy for Advanced Studies in Metairie.

The Color Company creates items from rainbow looms, a tool used to weave colorful rubber and plastic bands into decorative items. These entrepreneurs make mask holders, bracelets, rings, and just about anything short of a kitchen sink that can be made with colorful miniature rubber bands.

They get together once a week as a virtual group to create. It’s much like an old-fashioned sewing circle or an updated Babysitters Club. They socialize, plan, assign roles, brainstorm and eat crunchy cheese-flavored snacks.

“Basically, the idea came about when Lucy and Charlee were on a Facetime call and they were just bored and Lucy said, ‘We should start a rainbow loom company,’” said Duvoisin. “They wanted it to be a friend business group, so they asked Ava, Jane and me to join.”

They girls are using their moms to get the word out on Facebook. They also reminded their parents to tell people at work too. 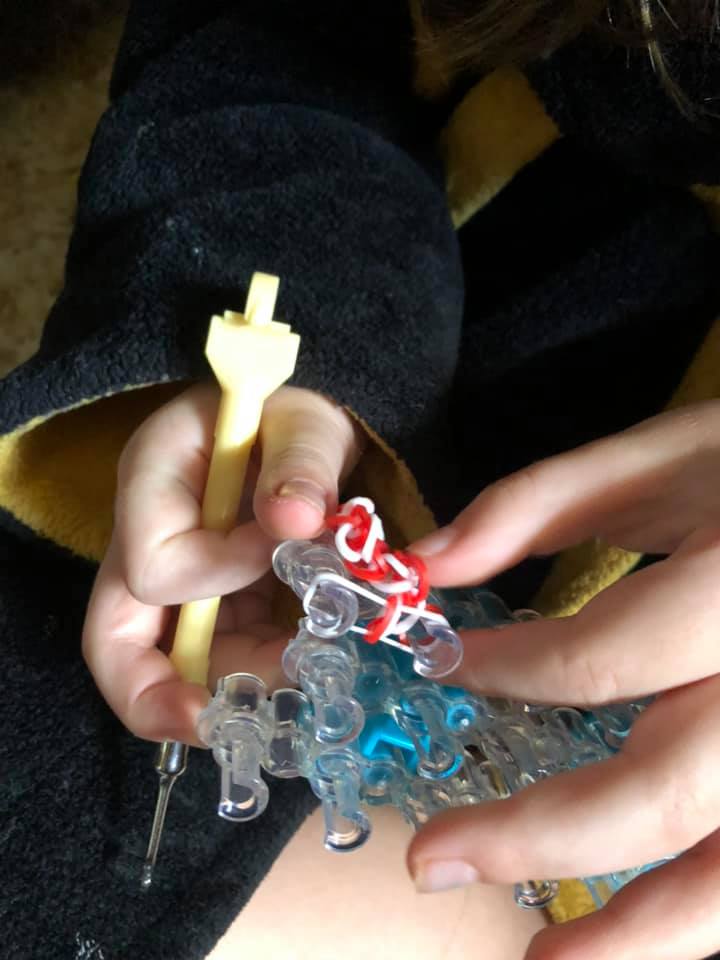 “At every meeting we are going to hand out flyers to the neighbors that we made,” Duvoisin says. “We sold some mask holders this way in Jane’s neighborhood this weekend!”

Eventually, the girls hope to expand their offerings to include special group packages. Currently, they eagerly accept color requests.

What makes The Color Company so special? The girls happily chimed in with their thoughts.

“I think that since we’re friends and we all really like doing it, it makes it really special that we get to do it together,” says Ava Carrigee.

“I think it’s special because I live across the globe now (she just moved to Reno, Nevada this week) but we’re still able to work together,” says Brown.

“I think because we created this business when we were stuck in quarantine and we had a lot of opportunities to make things people wouldn’t normally make like mask holders and ear savers,” says Chisesi.

“I think it’s cool that we came up with this while we were stuck in our houses and can do most of it virtually,” adds Duvoisin. “And we’re doing it all ourselves. We don’t have some big machines we use. We just are doing it out of something we got from Michael’s, with our own hands.”

Duvoisin’s mother, Amy Kirk Duvoisin, is a communications and outreach consultant for Jefferson Performing Arts Society, who formerly worked as marketing director at French Market Corporation, thinks that it’s all about the spirit of a project.

“If it’s straightforward enough and true and honest, captures something about the time and place we are in, and is somehow a bit necessary on any level, it just works,” she says. “I still don’t want to be too involved with their company, but I think the moms and girls are striking a balance of watching, supporting and giving a bit of advice, but the girls are really the driving force.”

If you want to support these young entrepreneurs, Color Company’s email is colorcocreations@gmail.com.

“I love America so much,” says Sunnie Gail Shafer, one of the girls’ supporters. “At any moment, anyone can take on the entrepreneurial spirit and become capitalists. What beautiful freedom and wonderful creativity.”