The Verdict Is In

E. Paige Sensenbrenner, senior partner in charge of Adams and Reese, shows us how the firm’s New Orleans office is the perfect blend of function with a bit of flair.

Perched high above the New Orleans skyline at 701 Poydras St., the law firm of Adams and Reese occupies four floors of One Shell Square, with the main reception area and most of the conference rooms on the 45th floor. Almost every space offers sweeping views of the Mississippi River as it winds through several parishes.

“We moved to One Shell Square in 1973, shortly after the iconic building was completed,” says E. Paige Sensenbrenner, senior partner in charge. “The central location is still the right fit for our firm.”

Today, 300 attorneys and advisors practice multidisciplinary law at Adams and Reese, which includes 16 offices in 15 markets around the southern United States and Washington, D.C.

“It’s a long time for the Adams and Reese names to be associated with a successful law practice,” Sensenbrenner notes.

“Expansion outside New Orleans began in 1984, and the firm continued its regional growth to Baton Rouge, Mobile, Washington, D.C., and Houston, securing the firm’s strategic vision as a pre-eminent law firm in the Gulf South region,” he says. “Adams and Reese moved into Jackson with a merger in 1996 with a total of 155 attorneys at that time. Then further targeted growth added our Birmingham office, two offices in Nashville and another in Memphis. Expansion into Florida began in 2009 with the addition of five Florida offices including Sarasota, St. Petersburg, Tampa, Tallahassee and Jacksonville. Our most recent move was into South Carolina, adding our Columbia office.”

Designed in the International style by Skidmore, Owings and Merrill, the 51-story skyscraper has maintained its leadership for prime office space throughout its 43-year existence. The steel core building with a concrete perimeter is actually clad in Italian travertine (limestone) and bronze glass. While there was some concern over the years regarding the limestone’s integrity during severe weather such as tropical systems, Hurricane Katrina proved the fears invalid when the building only suffered minimal damage.

Today the firm occupies 85,186 square feet on four floors — 43, 44, 45 and 46, with three of the floors having undergone major renovations in the past few years.

Three of the floors have a new look. “We began renovations on the 43rd and 44th floors in 2013,” Sensenbrenner says. “Included in the 44th-floor changes is the new state-of-the-art Thomas G. O’Brien Media Center. The facility, along with our other media centers throughout the firm, is significant to our regional presence and communications.”

Renovations to the 45th floor began in 2014. “We like to note that our offices throughout our regional footprint are all handsome with common elements, yet they each have a special touch of local flavor from their respective market,” Sensenbrenner says.

Sensenbrenner’s tenure with the firm began in 1987, after he graduated from Loyola College of Law. He also holds a nursing degree from Charity School of Nursing.

Sensenbrenner’s medical background served him well when he initially established his practice in medical malpractice defense. “Over the years, my litigation practice has evolved to include pharmaceutical and medical device products liability, pharmaceutical pricing claims, insurance fraud, toxic torts, and accounting malpractice/fraud,” he says. “Many of these claims involved class actions and complex litigation.” 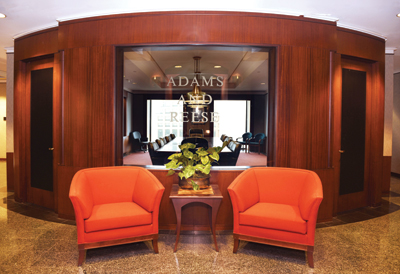 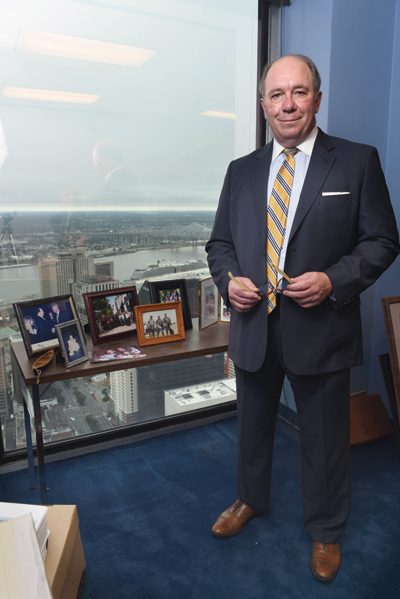 LEFT: The reception area on the 45th floor is furnished with comfortable leather seating. RIGHT: E. Paige Sensenbrenner, senior partner in charge of Adams and Reese LLC, stands next to a window in his office on the 45th floor of One Shell Square overlooking the Mississippi River and the New Orleans skyline.

He also defended a parish government in a class action alleging property damage resulting from levee failures in the wake of Hurricane Katrina, and he is lead trial counsel for a major energy company in cases alleging radiation exposure. His practice also includes government relations and health care. Sensenbrenner has drafted legislation for health care entities, insurance companies and pharmaceutical manufacturers, and testified before legislative committees. He also serves as outside general counsel for the Louisiana Organ Procurement Agency and the Louisiana Cancer Research Center.

It is interesting to note that his unpretentious office doesn’t occupy a corner of the building or have any special features. “It’s functional and that’s what really matters,” he says. With a heavy court schedule, Sensenbrenner didn’t have time to clear his desk or move the boxes of files that covered most of the floor. “Just step over the boxes and stacks of paper on the floor,” he adds as he points to the stacks. “This all represents the hard work on a case we just completed. I’ll clean up next week.” He doesn’t find it strange that his office is a modest size. “All I need is a desk, chair, computer and telephone,” he says.

Sensenbrenner does have one uncluttered table. It sits in front of a large window that overlooks the city’s skyline and the Mississippi River, where he proudly keeps family photographs of his wife, Judge Madeleine Landrieu of the State of Louisiana Court of Appeal, Fourth Circuit, and his four daughters – Erica, 22, Hannah, 21, Alexandra, 19, and Olivia, 15. . Sensenbrenner met his wife in law school and they have been married for 25 years. “It has been an interesting experience to be a part of Verna and Moon Landrieu’s wonderful family, with 37 grandchildren that includes my four daughters.” Erica is in law school at Loyola University, Hannah and Alexandra attend Louisiana State University, and Olivia is a student at Ursuline Academy.

Born in Eunice, where his grandmother (Henrietta Bordelon Tyson) spoke French as her primary language, Sensenbrenner recalls how she would have her friends over for afternoon coffee and they would sit in the parlor and speak only French.

A “good ol’ Louisiana boy,” Sensenbrenner says his favorite hobbies are hunting and fishing. “I share a hunting camp called Fowl Play in Gueydan with my best friends with last names that include Duplechin, Courville, Tauzin, and Cazayoux. It’s where we hunt duck and geese on about 400 acres.”

Sensenbrenner says he’s proud of Adams and Reese’s focus on giving back. In fact, following a proposal by the firm’s New Orleans partners, Martin Stern, Jeff Richardson and Ron Sholes — working together with retired Louisiana Supreme Court Justice Harry T. Lemmon on a project for Louisiana Appleseed — this year the Louisiana Supreme Court made a move to encourage pro bono work statewide. 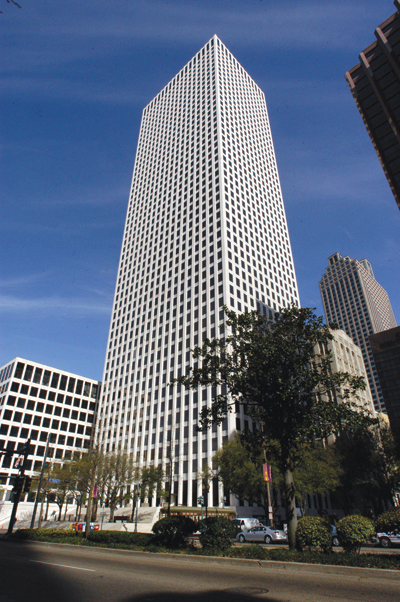 LEFT: An expansive conference room provides seating for large groups. The view encompasses the bridge over the Mississippi River and the skyline toward the West Bank. RIGHT: The Adams and Reese offices have been located in 51-story One Shell Square at 701 Poydras St. since 1973, shortly after the building was completed. Today the firm occupies a total of 85,186 square feet across four floors.

“Effective May 1, 2015, and for the first time in the state of Louisiana, every lawyer who does pro bono work will receive up to three hours of Continuing Legal Education (CLE) credit each year, under an order signed by Chief Justice Bernette J. Johnson of the Louisiana Supreme Court,” he explains. “The pro bono legal services provided under this rule will have a positive effect on many in need across our state, as well as credit for the attorneys handling these cases.”

Sensenbrenner says his firm also participates in various community events. “They bring our people closer to one another by providing community opportunities that might not exist in the course of regular business,” he says. “Our corporate philanthropy program, HUGS (Hope, Understanding, Giving, Support) was founded in 1988 by our partner Mark Surprenant. Through HUGS, over 100 organizations across our regional footprint have benefited from our employees’ volunteerism.”

Adams and Reese attorneys each strive to perform a minimum of 20 hours of pro bono work annually. They serve the indigent, who cannot afford legal representation and work with state and local bar associations on projects through the firm’s pro bono program, CA&RE (Caring Adams and Reese Employees). “We were proud to be listed in the AmLaw 200 firms and in the top 100 pro bono firms in the country for services delivered to our community,” Sensenbrenner says. “We feel that it is fine to give money to a worthwhile cause, but it is important to give of your service and your time.”

How does Sensenbrenner see the future of the firm? “Adams and Reese historically has been a progressive and innovative firm and we look toward the future on the same course,” he says. “Our strength, stability, regionalization and our diversified legal practice has helped us meet past challenges ranging from natural disasters to economic downturns. Our strategic business plan has proven to be a successful, effective business model. The future definitely looks bright for the firm.”