The Three Heads Of Lakeview’s Cerberus

How do you make a workers’ compensation company look exciting, a neighborhood dry cleaner look like an institution and a soda brand look like all the cool kids are drinking it?

“We specialize in risk management, and we took a risk,” he said.

Cerberus’ colorful “Welcome To The Party” and “Put Us To Work For You” campaigns both conveyed LCI was a provider for more than just Louisiana construction firms. Recent ads show a comical, well-suited LCI rep working alongside local business owners including mechanics, baristas and tattoo artists.

Tullis said after the “cutting edge, crafty and intelligent” campaign launch, LCI saw consecutive monthly premium increases, received more submissions in a single month than ever before and received submissions from a record number of separate Louisiana insurance agencies. By the second year, revenue was up 54 percent and the number of agents writing LCI policies rose 23 percent. In 2016, LCI became the largest Self Insurers Fund (SIF) in Louisiana.

“They have a real talent for capturing attention in a crowded field,” Tullis said of Cerberus. “When people find out I work for LCI they say ‘I love your ads.’ We don’t hear that a lot in our industry.”

“Focus is our strength,” Cerberus’ co-creative director Justin Bonura said. “We focus on one aspect, keep it simple, then blow it out and have fun with it. The LCI campaign has been really successful and doesn’t show any signs of stopping.”

The boutique creative agency’s namesake is the loyal, three-headed mythological watchdog Cerberus who was stationed at the River Styx guarding the entrance to the Underworld. Each head could see the past, present and future. Together, they focused on the epic task at hand.

The three contemporary heads of Cerberus are partners and co-creative directors Bonura, Rocky Russo and David Caruso who started their business, CPR + Partners, in 2008, and rebranded as Cerberus last year. With more than 35 years of combined professional marketing experience, they have a staff of six to eight, currently work for six main clients, have amassed an enviable collection of national and international awards and accolades and generate more than $2 million in annual revenue from a small storefront ensconced between a Lakeview post office and an hair salon.

“We’ve gotten unbelievable results for LCI,” Cerberus’ Russo said. “And you only create that when you synthesize a message in a focused way.”

“We create ideas that hit the targets the clients want to hit,” Cerberus’ Caruso, whose previous clients include Godiva Chocolatier and New Orleans restaurant Cochon, said. “That’s what the work is supposed to do. Not to please them or please us, but please the consumer.”

The three agree the shop is “all about the creative” and they try not to let practicality get in the way.

“Sometimes the printers we work tell us ‘no’ and try to put us back in the box,” said Russo, whose portfolio includes work for Reebok, Ben & Jerry’s and Calvin Klein. “Then we think of alternative ways to execute an idea. We all have to wear multiple hats here. When people look at our work they think it’s a 30 man operation.”

“When companies need a big idea on an international scale, they come here and look for it,” said Bonura, a former creative director and award-winning copywriter at Zehnder Communications. “I think that’s the reputation we have. When a brand is looking to make some headway, we give them something that captures people’s imaginations.”

Bonura is most proud of Cerberus’ work with Young’s Dry Cleaning. When they started, Young’s was spending $5,000 a month on generic postcard advertisements and not investing in growing their brand and identity for its Lakeview and Uptown New Orleans locations. Cerberus suggested increasing Young’s pick-up and delivery service and turned Young’s website into a business tool where people could sign up and get on the route.

“We took it down to the studs,” said Bonura. “We did everything. We made it look like this company had been advertising for decades with a tag line that made it seem like they’ve been around forever, ‘Keep you clothes looking Young’s!’ Young’s wanted to create a relevant historical New Orleans brand, and the results were through the roof.”

“We designed their logo so it looked like it was made in the 1940s and was just taken out of a file cabinet, dusted off and refreshed,” said Caruso.

With New Orleans’ original craft soda Fest, Cerberus exercised its expertise in brand leverage making the small soda brand pop and compete against bigger brands that have been around for years.

“We worked together on building the whole brand from the ground up,” said Fest Cola founder Roy Nelson. “Cerberus helped design the packaging, bottles, boxes and cartons. Initially, the goal of the launch was to build distribution.”

“We helped name that product line, we named the sodas, we worked on the coloring and the flavor of the products,” said Bonura. “We roll up our sleeves and help startup brands like Fest come into their own.”

Nelson said his niche, bottled cane sugar soda company had a limited budget to work with, yet Cerberus’ collaboration helped the brand get into 100 stores in just a few months after its 2014 market introduction.

“Cerberus is good at working outside the box, finding creative solutions with a tight budget,” said Nelson.

“That’s where the advertising comes in,” said Bonura. “If you don’t advertise, no one discovers what you’re about and where you are. A lot of agencies think a brand is your mark and your identity, but it goes beyond that. It’s a culmination of the identity, the design aspects, the colors, the style, how the commercial is shot and the way the voices and music communicate. Ultimately, people need to feel something and that’s what really good advertising does.”

“When we pitch to distributors outside the market, our branding and unique flavors are our key selling points,” said Nelson. “Branding is everything.”

“It’s been a big success for us,” LCI’s Tullis said of Cerberus’ work. “We’re proud of our ads. We have them framed and displayed in our offices.”

“You’ll never grow long-term sustainability without advertising,” Tullis said of LCI’s $250,000 annual print ad expenditure. “We’re a small company and it was a big transition for us, but business increased when we started advertising and we saw results very quickly. Even the glossy, high-end glitzy magazines give us prime position without having to pay extra for it because they like our ads so much. If your business spends money on advertising, it has to be memorable and engage people.”

“I think we’re really good at not wasting clients’ money,” Bonura said about maximizing the value of a campaign’s creative assets. “Everyone we reach with a certain initiative we like to track back for results and not have any waste.”

“The goal is to get what they’re selling in front of people and make it look like you’re everywhere even if you’re not,” said Caruso.

“Initially, the internal feedback was way out there,” LCI’s Tullis said about the Cerberus ads. “But that’s where the trust comes in. You can’t tell these guys what to do. They tell you what to do, and you have to trust them. It turned out to be a very positive thing.”

“Trust and honesty are the hardest things to build and the most rewarding,” said Bonura. “We’re looking to service more high-profile, capable companies that want to grow because there is no limit to what we can do.” 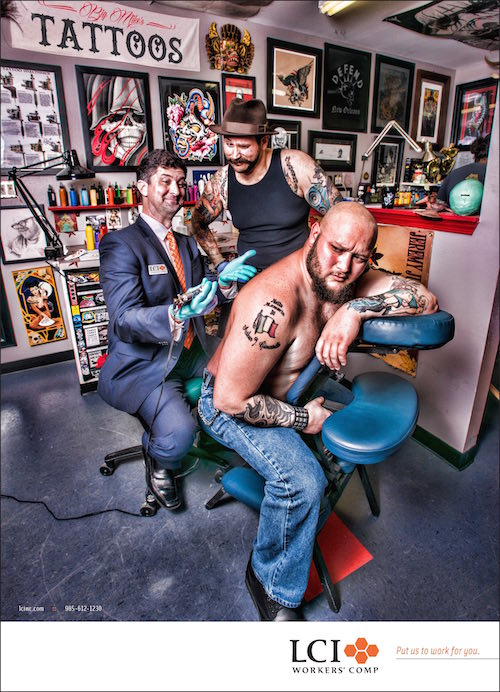 PHOTO: The American Advertising Federation recognized Cerberus’ full page LCI ad “Mike’s Tattoos” with a gold award in the 2014 competition in New Orleans. “Mike’s Tattoos” was also recognized as one of the six best print ads of the week by BestAdsOnTV.com in March 2017. 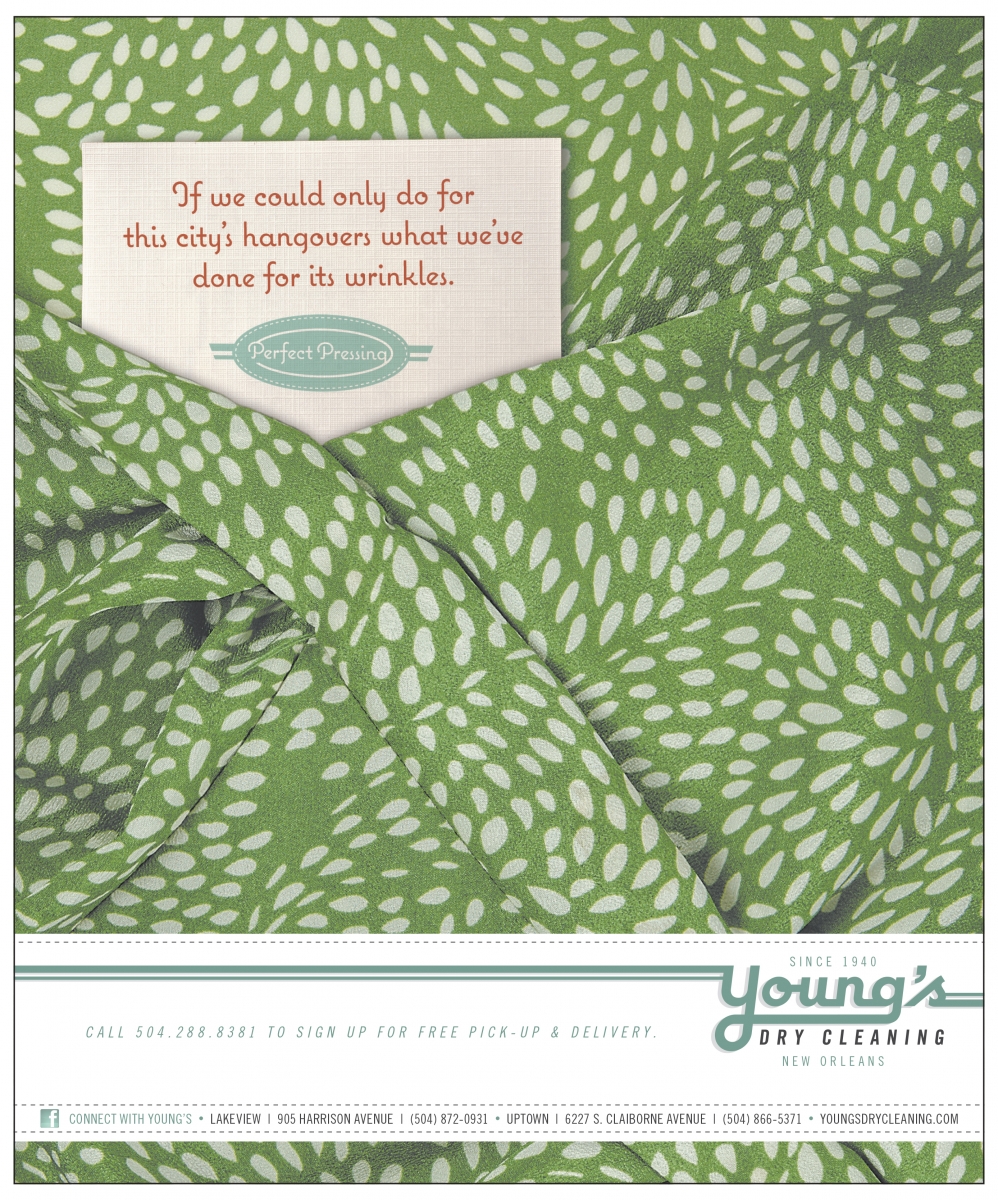 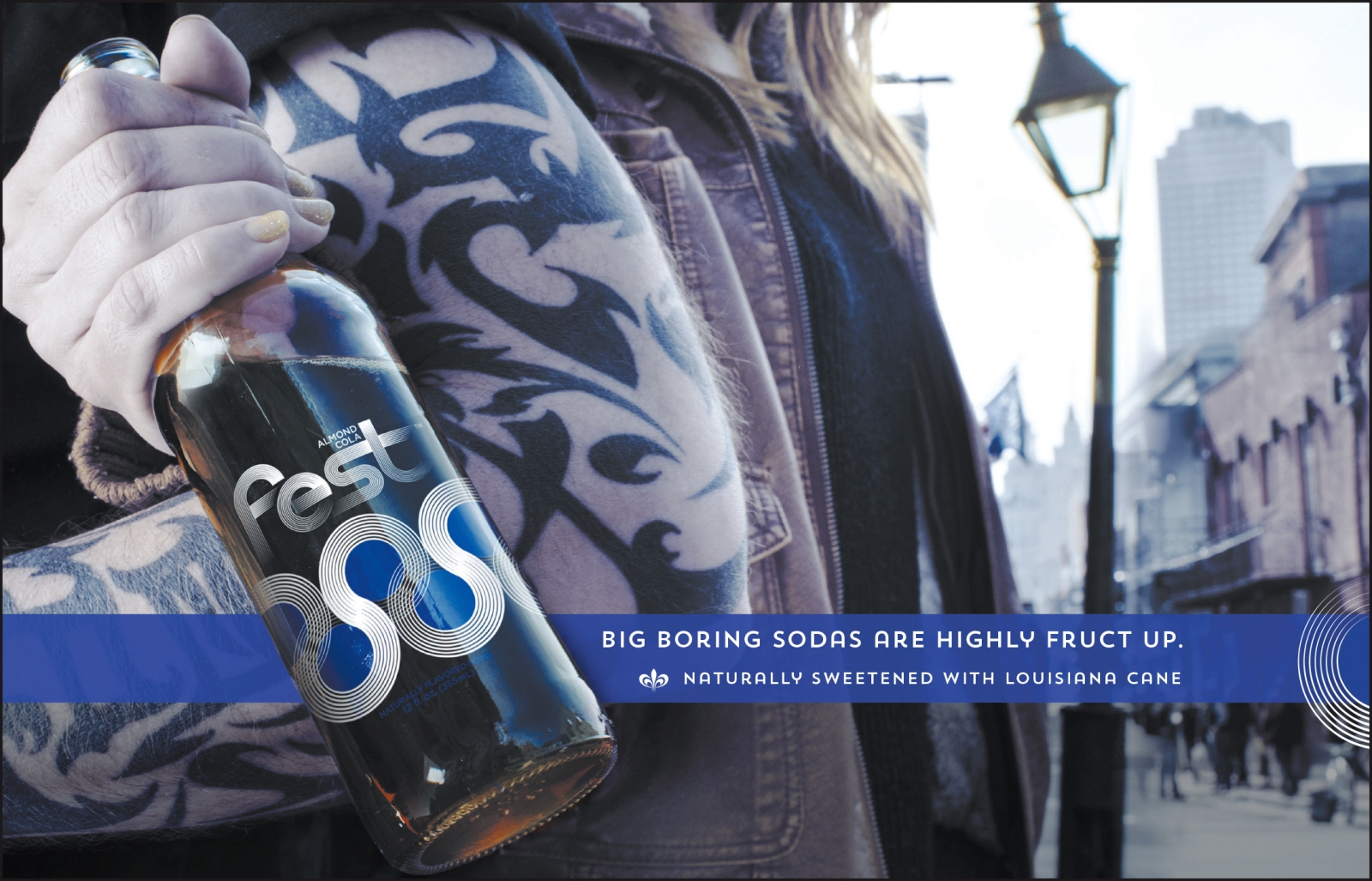