The sweet side of French Immersion

New Orleanians craving an authentic taste of France without a passport are in luck. Even against the backdrop of the city’s heavy French influence, a retail enclave has evolved along an uptown stretch of Magazine Street whose names conjure as much Paris as one can get on this side of the Atlantic — Aux Belles Choses, The French Library and Lilette, to name a few.

The newest addition to this petit quartier of shops is La Rivière Confiserie, a pristine white storefront at 3719 Magazine St. that houses an assortment of candies, savories and home goods imported directly from France, many of them not available anywhere else in the United States.

The shop is owned by Kyly Larriviere and Polly Hardie, whose children attend the same French bilingual school in New Orleans. They took the plunge into entrepreneurship as a way to include their families in their professional lives while sharing the artisanal French products they love with a city they believe will appreciate them.

After building a career as a clinical researcher in Charlottesville, Virginia, Larriviere sought to find an occupation that would allow her to spend more time with her children. “I read a lot of new age-y things about ‘dream your dream’ and ‘live your bliss’ and all that stuff, and I remember the moments where I would lay back and think, ‘What would I do if I could do anything?’”

The answer she came up with was opening a candy store. When Larriviere and her family relocated to New Orleans for her husband’s job, they connected with the city’s French-immersion schools as well as her family’s French ancestry. “And it came together in my mind that it should be French candy.”

Hardie has a background in marketing as well as a deep affinity for France developed during a four-plus year stint living in Paris with her husband and children. When Larriviere asked her to join the venture, Hardie’s response was: “Pitch it to me.” So Larriviere transformed the living room of her home into a candy store, filled with samples she had brought over from France.

“What I loved about the idea,” recalls Hardie, “was how serious Kyly was about the traditions and specific products she wanted to bring in and the whole history between New Orleans and France. I thought she had a really interesting and unique model and wanted to bring things we didn’t have here to New Orleans, to create a place where people could come discover and be delighted by the packaging and the products.”

New Orleans’ strong French roots were another selling point for the duo. “We thought New Orleans was already sort of predisposed to something that would be French, so we didn’t feel it was going to be an uphill battle to convince people that the products were great,” says Hardie. “They present beautifully, and once you try them, they are so unique that we feel it’s just a matter of getting it into everyone’s hands.”

Larriviere kept her eyes open for the perfect location and was delighted when a property became available on Magazine Street. “One of the reasons I chose the location was because Aux Belles Choses was here and Lilette, so I saw those as the anchor. There was the potential to be nestled in a community that already had some French leaning.” She was also able to sublet part of the building to another retail vendor, thus reducing her overhead.

Larriviere and Hardie are hoping the neighborhood will acquire a drop-off stop for the double-decker City Sightseeing bus, which carries visitors up and down Magazine. This would add to the already steady foot traffic of people stopping in on their way to popular destinations like Shaya, La Petite Grocery and Mignon Faget.

Since opening in December 2015, La Rivière has demonstrated a broad appeal that thrills its owners. “Our customer base seems to surprise people,” says Larriviere. The store is a hit with children, naturally, but “our clientele is really ages 22 – right out of college – to 65 or 70, and includes men. People look at the shop and think it’s going to be older ladies, so they’re surprised at the number of young professionals, people who are college educated, have traveled and seen a world outside their own country. And then, of course, they like food.” 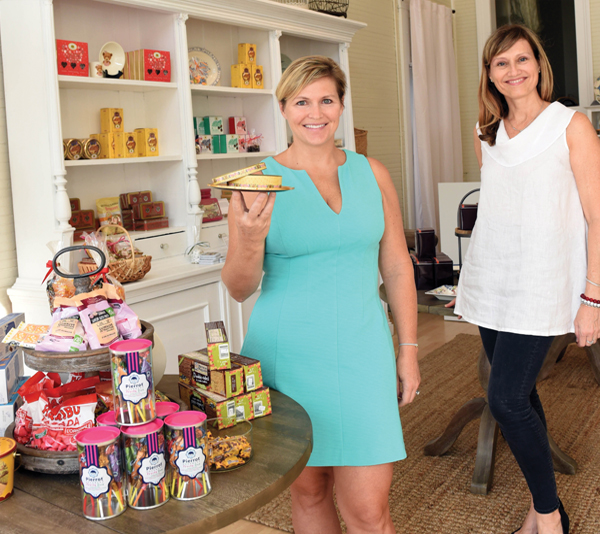 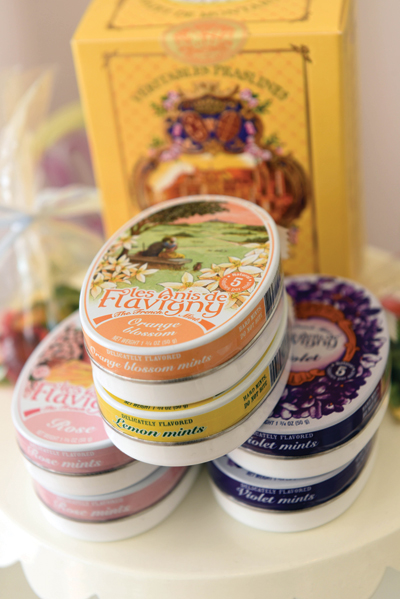 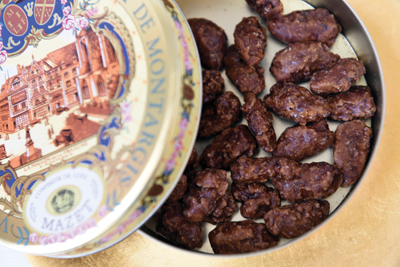 The owners attribute part of the store’s warm reception to New Orleanians’ willingness to try new things. But even they have been surprised at how far that culinary experimentation extends. “For me it was always a question of certain things that appeal to the French palate that may not appeal to the American palate,” says Hardie. “So we took some risks early on with some products.” One surprise hit has been the Coquelicot de Nemours, a poppy-flavored hard candy. “I thought, ‘Really? Poppy? People aren’t going to eat flowers,’” recalls Hardie. “It just took off, and we sold out of it.”

Sampling is a big part of the in-store shopping experience. Larriviere and Hardie have found that Americans do not share the French fondness for hard candies, for example, so encouraging customers to sample those products (instead of heading right for the chocolates) has yielded positive results. “Once they get the flavor, they are hooked,” says Larriviere. “I feel like I’m sharing a secret with somebody who otherwise might not have ever taken a chance on these.”

Larriviere and Hardie firmly believe that the ability to offer authentic French products, rather than Americanized versions of them, is what sets their store apart from other confectioners in town, as well as the commitment to sharing the tradition and history behind the items. Both owners take pride in the pedigree and uniqueness of their products – many carry the French government’s EPV designation of excellence.

A number of the products at La Rivière are not available anywhere else in the United States, a distinction of which Larriviere is “humbly proud.” To import these products from France, Larriviere and Hardie often help producers navigate the complex process of gaining FDA approval. “The rules are always changing,” says Larriviere, “so we have to stay abreast of that.”

One such vendor is the confectioner Henri Le Roux, which operates boutiques in France and Japan. La Rivière is the first U.S. outlet to carry their products. Larriviere worked over a long period of time to cultivate this relationship and “the understanding that there needs to be trust in my representation of their products, that they are presented well,” she says. “I don’t think necessarily that these products want to be mass marketed.”

As the store has evolved, so have its offerings. La Rivière now carries an épicerie line with savory products such as tapenades, mustards and olive oils. They also carry a small selection of French tableware, napkins and decor.

But the biggest part of the expansion is the opening of a small patisserie in the back of the shop, a place for customers to enjoy authentic French coffee and tea as well as pastries made by local bakers committed to following classical French methods of production. This will include baguettes from producers like La Boulangerie (which Hardie and Larriviere consider the most authentically French in town) and pastries such as the financier, which are ubiquitous in France but less commonly found in the U.S.

“Part of our vision is for La Rivière to become a destination for the neighborhood, so the kids pop in after school and get something from the candy bar, and with the opening of the patisserie, it becomes a place for neighbors to stroll in and sit down with a cup of coffee or in the evening to pop by and grab a baguette on their way home,” says Hardie. “We’re already doing a lot of sampling in the store, so why not expose our customer base to more and different French products?”

In conjunction with the opening of the patisserie, the store will broaden its reach by launching a new website for online shopping. “We have a lot of ideas about how we want to expand the business, but we want to do that very deliberately,” says Hardie. “With the patisserie coming on line, that’s where a lot of our energy will be focused, but the confiserie will always be the heart and soul of La Rivière, because that’s where everything got started. Everything else is meant to embellish what’s going to be happening in this room.”

• The original praline looked little like the one New Orleanians know and love today. The Prasline de Montargis (shown above) was created in 1636 by the chef of the Duke du Plessis-Praslip for the ladies of the court of Louis XIII. Unlike our soft, round, pecan pralines, the original version contained an almond coated in crispy caramelized sugar. After the recipe traveled with the Creoles to the southern United States, almonds were replaced by the more readily available pecans, plus cane sugar for sweetness and cream or milk for a softer texture.

• The financier’s origins lie in a medieval cake recipe that was tweaked by a baker working in the stock exchange area of Paris around the turn of the 20th century. He wanted to create something that his banker and stockbroker customers could eat without getting their suits dirty, and he made it in the shape of a gold bar.