The Struggle to Keep the Wheels of Justice Turning

Courts have turned to technology to move some cases along, but much larger changes may lie ahead for the legal industry as it struggles with COVID-19 restrictions. 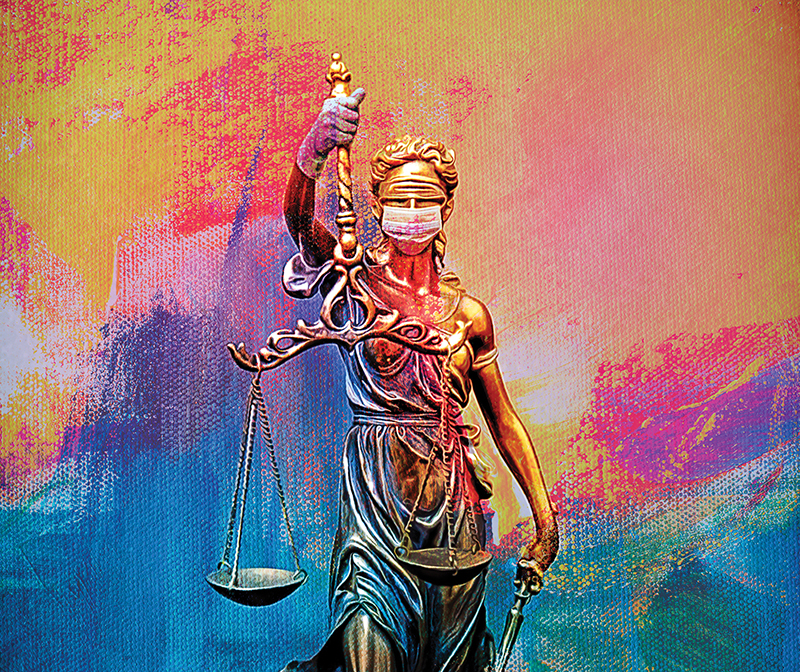 In any given week we had 40 mediations scheduled. We probably lost half of those due to just sheer panic.

COVID-19 has forced businesses across the board to find new ways of doing things — including the legal industry, as courts at every level were forced to close temporarily.

“There was a period of pandemonium where people had matters that were pending with our mediators,” said Robert Burns Jr., managing partner at Perry Dampf Dispute Solutions, which has offices in Baton Rouge, Lafayette and Fairhope, Alabama. “In any given week, we had 40 mediations scheduled. We probably lost half of those just to sheer panic.”

“It shut us down initially, on the civil side, to about 15 to 20% of what we were able to do before,” said Brian Katz, a partner at Herman, Herman & Katz, LLC, a litigation firm focused on personal injury, business and construction litigation, and class-action work that operates six offices across Louisiana. “Courts were completely closed for a while. They opened up for emergency matters, but most of the day-to-day stuff that the majority of lawyers handles is not an emergency matter.”

Katz said that as of early June, active cases were picking back up a bit.

“We’re probably up to 50-75% moving, but it depends on the cases,” he said. “If they’re at a stage when you’re in the thick of it, those didn’t really stop. But if you had a case that was at the beginning or at a lull, it sat in further lull because of the shutdown.”

The impact of COVID-19 restrictions varied by legal concentration.

“People have a year to sue for things like auto accidents or slip and falls or anything like that, so suits I see now are from accidents before the virus or pandemic started,” said Thomas Buck, a partner at full-service law firm Blue Williams with offices in Metairie and Mandeville. “If there’s going to be a lag in the litigation arena, I haven’t seen it yet.”

Because trial dates drive the momentum of a case, with those dates pushed back, work has slowed.

“I haven’t really noticed a significant drop in the pace of filings,” said Tim Gray, managing partner at Forman, Watkins & Krutz, LLP, a national mass tort and litigation firm with offices in New Orleans, Mississippi, Michigan, Texas and New Jersey. “What I have seen is cases are getting filed and nothing is happening immediately as you would normally expect.”

Because no one can predict when things will return to normal, the legal industry has been forced to explore new ways to work.

“Clients need their matters moved forward to a conclusion so they’re not in an indefinite state of litigations,” said Katz. “The parties were going to either sit around and wait until there’s a [COVID-19] vaccine, or we were going to jump into the 21st century and start doing the things that we can do effectively through technology.”

“Court reporters are starting depositions by getting everyone to agree on the record that the method being used is satisfactory,” said Buck, “even though they may not be there to administer an oath live and in person to the witness.”

“Litigants need resolution to their cases; businesses need some finality in their matters — it’s all part of the process.”

There are also some potential long-term benefits to conducting depositions by video conference, including less travel time for lawyers, which can mean savings for clients.

However, there are parts of a legal proceeding that are hard, if not impossible, to conduct over video, and the legal field is still figuring out how to manage those.

“In the short term, we’re going to have hearings which are limited in terms of the number of people that can be in a courtroom, the number of cases you can have at one time,” said Walt Leger Jr., senior partner at Leger & Shaw, a full-service firm with offices in Louisiana and Alabama.

Leger said judges are trying to figure out new ways to manage motions and pretrial hearings.

“Typically, on a Friday, you might have 20 motions set, so the lawyers for all 20 of those cases show up at 9:30 a.m. and they go one after the other. But, because of the restrictions you don’t want to have 50 lawyers in a courtroom at a time.” Judges might begin scheduling motions like doctor’s appointments, every 30 minutes, to keep too many people from gathering at one time.

“That may make things go faster, but will probably make them go slower,” added Leger.

And as for jury trials, Leger said that’s going to take a while to figure out.

“One, can you get juries?” he said. “Two, can you really put 12 people relatively close together? Courtrooms aren’t that large. Completion of civil and criminal jury trials will be reduced for a while, that’s my prediction.”

A backlog of court hearings has led to an increased demand for mediations and arbitrations.

“I think part of that is because people don’t know necessarily how quickly, or if they’ll be able to move forward in the court system,” said Burns. “So, they resort to us because they don’t know of any other means. We’re inundated.”

As cases are taking longer to schedule, conduct and finalize, another concern is the viability of some law firms. Lawyers who deal with personal injury cases, for example, often don’t get paid until the case is settled.

“At some point in time it’s going to affect the ability of lawyers to maintain their legal practice,” said Steve Lane, partner at Herman, Herman & Katz, LLP. “If you’re a plaintiff attorney, that’s going to affect your cash flow and your ability to practice law.”

Lane said attorneys who typically work on a contingency basis may switch to doing more hourly work in order to ensure they are paid no matter how long a case takes.

What changes from COVID-19 remain permanent, like with all industries, remain to be seen.

“We are understanding that as a profession we can work remotely but is that something that’s going to continue for the near future or have some lasting effect?” said Leslie Ehret, a partner at full-service, New Orleans-based law firm Frilot. “Are we going to be more flexible in terms of where people work? On top of that we’re looking at whether we need a lot of support services we have in an office setting when we’re all working remotely. I think those issues are coming up certainly in law firms and other office-oriented businesses as well.”