The Sky’s The Limit

With rapidly increasing flight options, the Crescent City is poised to be a major player in the airlift industry.

Alongside record-breaking visitor numbers over the past few years, New Orleans’ airport — Louis Armstrong International — is fast becoming a global player, securing the title in 2013 of fastest-growing airport between 5 and 10 million passengers for its colossal air service growth of 7.1 percent.

According to Michael Hecht, CEO of Greater New Orleans Inc., each additional airline and flight is a crucial step for the city’s future.

“There is probably no single lever that we can pull in economic development that will have as broad and positive a seismic impact as air connectivity,” he says. “Every time that we add a new route, or better yet, a new airline, we are creating a possibility for new visitors and new business in ways that go beyond what we can even imagine.”

In addition to Copa Airlines and Silver Airways, Branson AirExpress and PEOPLExpress have begun offering new and affordable regional routes, while United, Delta and Southwest Airlines have added service to U.S. destinations and Mexico.

With 73 destinations in 30 countries, Copa Airlines is one of America’s fastest-growing air carriers. According to Pedro Heilbron, CEO of the airlines, “One of the key elements of Copa’s business strategy is to expand our network by offering new service to regional destinations and increasing flight frequencies where it makes sense for our operations.”

On June 24, New Orleans will be the 11th U.S. destination, adding nonstop service to the airlines’ roster.

“Our sustained growth in the last few years has allowed us to strengthen our leadership position in the region and establish the Hub of the Americas at Tocumen International Airport in Panama City as the most complete and efficient hub for travel to, from and within Latin America. Copa Airlines’ connectivity has promoted business and contributed to increased commercial opportunities and investment in the countries where we operate.”

He says establishing service in New Orleans makes perfect sense for the airline because Greater New Orleans is home to a large Central American community and Latinos from many other countries of origin. As such, the city supports considerable air traffic to and from South America.

“Overall, Copa’s Panama-New Orleans flight has the potential to make a substantial contribution to tourism and economic development between Louisiana, Panama and the rest of Latin America,” he says. “The city really understands the importance of international air service in today’s global economy and the need for connectivity to Latin America.”

Copa passengers are offered complimentary meal service, wine and spirits, and in-flight entertainment systems in Spanish, English and Portuguese. Heilbron expects the initial mix to be about 40 percent business travelers, though the airline will offer opportunity for leisure travel as well.

“Panama offers amazing birdwatching and eco-tourism and a thriving adventure segment — with rock climbing, kayaking, whitewater rafting, snorkeling, zip-line rides, jungle-boat rides at Gatun Lake or a visit to an indigenous tribal settlement. Panama has great beaches and islands, with five-star hotels, convention facilities, year-round good weather, great coffee and food, colorful festivals and folklore. The city itself offers everything from great hotels, restaurants and nightlife, to the Casco Antiguo historic district, a UNESCO World Heritage Site that is home to beautiful 16th- and 17th-century Spanish and French Colonial architecture … I could go on and on,” says Heilbron, who also mentions the booming hotel industry, with 3,000 new rooms ready by the end of 2015.

Copa passengers are offered one free stopover per itinerary at no additional charge. For example, if someone wants to vacation in Costa Rica but also wants to stop in Panama City for a couple of days, they can do so for free. 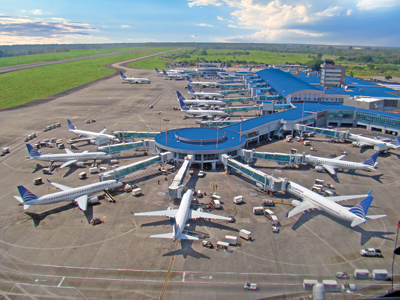 Tocumen International Airport (AKA -the Hub of the Americas) in Panama.
Photo courtesy of Copa Airline

Silver Airways, the largest independent airline based out of Florida, will offer two new routes from New Orleans starting June 16. The carrier, currently averaging 145 daily flights, will establish nonstop service between New Orleans and Birmingham, Alabama, twice a day, along with nonstop daily service between New Orleans and Pensacola, Florida — just in time for summer travel season. Travel time to Birmingham, perhaps for the Talladega Superspeedway in Lincoln — takes just an hour and a half. A flight to Pensacola takes an hour.

The benefits for local travelers are clear. “You can drive to these destinations in four or five hours,” says Jamie Kogutek, vice president of network planning for Silver Airways. “But now, if you’re a businessperson, you can get there and back in the same day and get home to your family.”

Kogutek says the new flights will also boost economic growth in New Orleans. “Those coming to New Orleans are going to have more time to spend now in the Quarter,” he says, “and more time means more dollars in the community, and that is critical to New Orleans’ economy.”

Silver Airways’ turbo prop plane is designed to work more like a private aircraft than a commercial one. Here, Kogutek says, the emphasis is on saving time. A ramp allows passengers to board and deplane quickly, and a valet service for luggage ensures customers aren’t left waiting in baggage claim. The 34-seat airplanes features flight attendants and drink service.

Silver Airways also flies to Jacksonville, Florida, with a 30-minute stop on the ground in Birmingham. 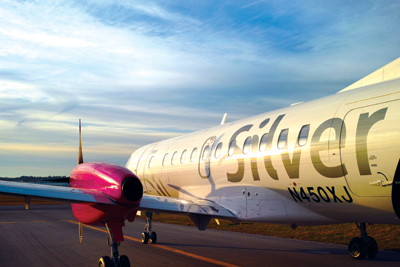 The Future of Air Travel in NOLA

“The fact that our airport is the fastest-growing in the country and we are now regaining broad international air connectivity means that the New Orleans region is posited to move from being a top second-tier location to once again being a truly global destination.” Hecht says, adding that Louisiana is No. 1 in the nation in terms of foreign direct investment in capital. He says that if the area is to continue growing, it’s critical that companies have access to the airport.

“The more that airlines like Silver help to integrate the region with the third coast — which extends from Houston to the Florida Panhandle — the more we’re going to grow as an economic community. By connecting residents of New Orleans with our sister cities throughout the Gulf Coast, Silver Airlines is going to help increase the flow of individual jobs and wealth throughout the South.”

Hecht says that GNO, Inc. has developed a set of six major issues that need to be addressed in order to ensure the continued growth of the region. One of the six is international airlift — including reconnection to Central and South America, as well as Europe. With the former checked off the list, Hecht reveals that the organization is currently deep in discussions to add a European flight.

“In the world of economic development,” he says, “there is nothing that surpasses airlift as a driver of economic growth and wealth creation.”

Looking for a Summer Travel Destination?

The following are recently added (and upcoming) flight options.

• Cincinnati, Ohio
Flights are now available (with a layover in Branson) via Branson Air Express, along with a nonstop option through Allegiant Air. 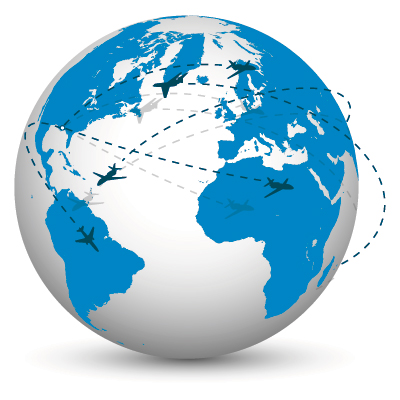