In 1890, at a department store in Boston, the first Santa’s helper began listening to Christmas wishes from eager children.  James Edgar, the store owner, bore a resemblance to Father Christmas and he thought children should have a chance to meet Santa in person, so he asked the store’s tailor to fashion a costume using the Thomas Nast illustrations of the character from 1860s issues of Harper’s magazine as inspiration. It was an instant hit and parents and children came from all over the Northeast for the chance to sit on Santa’s lap.

Here in New Orleans, 30 years ago a young professional actor named Jeffrey Martorell was hired to play Santa at a trade show during the Thanksgiving season. He happily donned the traditional red velvet Santa suit and started “ho-ho-hoing.”

“Because of my training, I knew how to project my voice,” he says. “Everyone at the convention could hear me. I loved it and that’s when I discovered my passion: to be the best Santa I could be.  I live and breathe the Christmas spirit.”

At his visits, he offers posed and spontaneous photos, stories and gift distribution (your own, or he’ll provide them for an additional fee). He’s also bilingual and even has a special pink Santa outfit for themed visits.

Thumbtack, an online service that matches customers with local professionals, recently did a study of the business of being Santa Claus. It found that the average hourly rate for Jolly Old St. Nick was $137.50 per hour. Metropolitan Santas make a good bit more — averaging around $187.50.

So, if one of these high-earning Santas works 40 days during the holiday season, he could easily ring in the New Year with $24,000 or more in total wages for a two-month gig. There is usually an additional fee if Mrs. Claus comes along, and since reindeer need special treats for flying farther than 25 miles so, most Santas charge a small travel fee based on distance.

Martorell’s rates depend on the number of hours and the number of clients. He never turns anyone down and tries to find a price to meet his clients’ needs.

“I also collect things all year-round to have special gifts to hand out and if the party has lots of leftovers, I take the food to the homeless,” he says. “I try to bring the Christmas spirit with me wherever I go.”

Of course there are some expenses — namely, the red suit, boots and belt — which can put Santa out $500 to $1,000. A really high-end Santa suit might run as much $5,000. Martorell’s first Santa suit was Victorian-style and was made by a friend.

He says starting out was a bit of a challenge.

“But once you’ve visited with some families, they’re generally going to want you back the next year,” he says. “And they will tell their friends.  It’s the same with corporate events.”

His website is also effective in bringing in gigs. The requests start coming in October and November and the season ramps up right after Thanksgiving.

Martorell says to be a good Santa you have to be quick on your feet because you never know what questions the children will ask or what they will request. You also have to be patient.

“I’ve never once had a crying child in my lap,” he says with a bit of pride. “You have to take it slowly with them. I try and get to know them, and I might ask them to help me with something. Then, when they’re ready and want to sit with me, there are no tears.”

With all the sniffles, coughs and sneezes in his face, how does this Santa manage to stay healthy throughout the holiday season?

“I start taking super vitamin C supplements right after Thanksgiving,” he says. “And I drink a lot of Native American herbal healing tea.”

Martorell says anyone can put on a suit, but to be a really good Santa you have to enjoy spending time with children and you have to love Christmas like he certainly does. 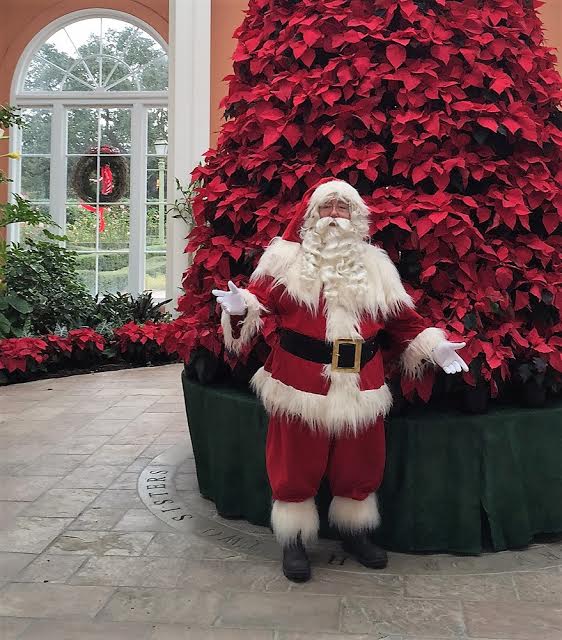 Travel safe dear readers and Merry Christmas to All!

The Importance Of Mentors