After 45 years building floats for some of Carnival’s oldest parades, Royal Artists has finally captured the King. 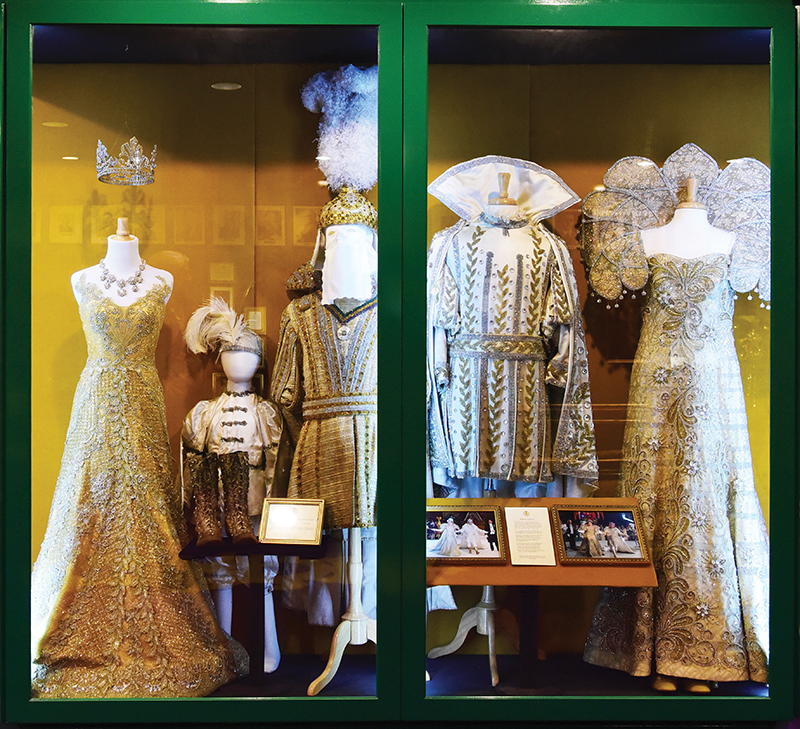 In the boisterous world of Carnival parades, Royal Artists Inc. is perhaps the biggest player you’ve never heard of, but it hasn’t slowed them down one bit. This season, the 45-year-old firm realizes its highest-profile role yet: float builder for Rex, King of Carnival.

On a gray afternoon in early January, Royal Artists owner Richard Valadie worked alongside his team in the Rex warehouse on Claiborne Avenue, cutting plywood for a float designed to carry Aurora, the Roman goddess of dawn, on Mardi Gras morning. Aurora herself, a 12-foot papier mâché sculpture painted in the fiery palette of a sunrise, stood watch nearby. The whine of a saw sliced through the otherwise quiet focus of the artists. Piles of hand-painted flowers and flames fanned out on the concrete floor waiting to decorate finished works.

The scene is a familiar one for the team at Royal Artists, who have spent the past 44 Carnival seasons building floats for New Orleans parades. This worksite, however, was history in the making.

Last year, the Rex Organization announced it would end its nearly 70-year partnership with Kern Studios, opting instead to work with the smaller and lesser-known Royal Artists to craft its century-old rolling tableau floats. The exact reason for the split remains unknown, but a statement from leaders with Rex and Kern said the decision to part ways was reached mutually.

This year, Rex, King of Carnival, will be accompanied by 20 floats hand-crafted by Royal Artists. Valadie said Royal Artists founder Herbert Jahncke, who died in 2007, aspired to count among his clientele.

“It was always his dream to get it,” said Valadie, a long-time Royal Artists manager who took the helm in 2011. “I know he’d be very proud of us.”

Shining in the Sun
As Royal Artists’ work on Rex marks the company’s first appearance on Mardi Gras Day. The daytime Rex parade is a change of pace for the float builder, which built its reputation on flambeaux-lit night parades like Proteus and Chaos. Float designer and Carnival historian Henri Schindler and Royal Artists float painter Caroline Thomas worked closely over the past year to find the right tone and color palette for the daytime parade. (The theme for this year’s Rex parade is “Omens and Auguries,” a fantastical homage to visions and soothsayers both historical and fictional.)

Stephen W. Hales, a New Orleans pediatrician and Rex historian and archivist, noted Rex floats are being built inside the krewe’s den for the first time in decades. In the past, float sculptures were built at Kern Studios and transported to the den.

“I’ve enjoyed watching Royal Artists working from sketches, starting with wooden armatures and building up sculptures using papier mâché and using techniques that would have been essentially the same as float builders in the Rex den would have used 150 years ago,” Hales said. “It is an old art form. It’s lovely to watch it play out day after day, week after week, month after month.”

Hales acknowledged Mardi Gras in New Orleans is constantly evolving and that Rex sees itself as the “historic anchor” for the celebration. A key part of that role, he added, is preserving an aesthetic “true to the Golden Age of Carnival,” including float design, themes and materials that would have been fashionable in the late 19th century. Royal Artists’ experience working on old-line parades, Hales said, made it a fit for the Rex organization.

“It is such a unique artist studio to year-round be able to walk in and see these rolling works of art in various stages of transformation from last year’s parade to the new parade,” Hales said. “It is a year’s work consuming the time and talents of dozens of wonderful artists. We let it on the streets for a few hours and then start over again. It’s an odd art form, but it’s what we do.”

Preserving the Artistry
Founded in 1975, Royal Artists has carved a relatively low-key niche in the otherwise bustling and extravagant business of Carnival. Jahncke, the son of a prominent New Orleans-area shipbuilding family, grew up steeped in Mardi Gras tradition. His grandfather was Rex in 1915, as was his father in 1966. With Royal Artists, he sought to preserve late-19th-century Carnival float design at a time when parades were trending larger and glitzier.

“We complemented each other, because you need the old, which [Jahncke] was presenting, and the brassy, which I was doing,” Blaine Kern, owner of the competing Kern Studios, told The Times-Picayune in 2007. “He turned out to be a doggone good float painter and sculptor, and more importantly, a wonderful competitor and a straight shooter.”

Royal Artists counted Carnival’s oldest parading organizations as clients, including the Krewe of Proteus, the Knights of Momus and the Mistick Krewe of Comus. (Momus and Comus withdrew from parading in 1991 after the New Orleans City Council passed a controversial public accommodations ordinance.)

In the 1990s, Royal Artists expanded to Mobile, Alabama, designing parade floats for Carnival celebrations in that city. Today, it is one of the only firms with a toehold in the Carnival tradition of both cities. Its client list in Mobile includes the Mystics of Time, Conde Cavaliers, Order of Mystic Magnolias and Neptune’s Daughters organizations, as well as Le Krewe d’Etat and Knights of Chaos in New Orleans.

Royal Artists has done some contemporary-style work in Mobile, but Valadie said its focus on traditional parades is what continues to set the company apart. This year, Valadie leads a 20-person team tasked with building 151 floats for nine parading organizations. Four of those parades are in New Orleans.

Unlike some float builders, Royal Artists doesn’t own or rent out floats, which means the bulk of its clientele are established krewes that own their own fleets. The firm has an Uptown warehouse off Bordeaux Street, but its artists do much of their work onsite at each krewe’s den. Valadie noted the practice allows Royal Artists to devote more time to the artistic aspects of the work rather than logistics.

The true strength of Royal Artists rests in the technical skill behind its creations. While tradition drew Jahncke to float building, Valadie entered the industry by way of art school. Growing up in New Orleans, he had always been awestruck by Carnival parades. He studied graphic design and sculpture at Louisiana State University, and joined Royal Artists as a float builder in 1998.

“I was drawn to Mardi Gras because it’s a reason to make art and it’s always renewing itself,” Valadie said. “That appealed to me.”

Valadie and his team relish the delicate details of the sculptures. He points to their cut-out flowers, formed with wire and paper and then hand-painted. At the Rex den, finished work ranged from pink peonies with flecks of gold foil to a curving yellow-orange angel’s trumpet. One float had large pink passion flowers with painted cable ties forming a whimsical halo of filaments.

The company’s creative skill isn’t limited to paper flowers. Valadie recalled a late-in-the-season decision to overhaul the float designs for the 2006 Krewe d’Etat parade after the levee failures caused by Hurricane Katrina. The krewe’s den had flooded, with several feet of water damaging completed floats. Royal Artists dried out the damaged floats and repainted around the water lines to make it look like the designs were melting away in water.

It was tough work, and Valadie said he wasn’t sure how many parade-goers even noticed the paint effects on the nighttime route, but he said it felt worthwhile, especially in 2006 when so much was uncertain.

“We made it through,” he added.

Planning for the Future
Early January is one of the busiest times of year for Royal Artists, when the unforgiving deadline of Mardi Gras looms largest, and the artists tasked with bringing the season’s parades to life bring all hands to deck. At the Rex den, artists scaled ladders to install plywood pieces on float frames and dabbed paint on remaining float details.

Valadie still spends hours in the studio sculpting and painting, in addition to the time spent working on payroll and books at home and planning for future business. He noted the company is already working with clients to develop concepts for 2021 and beyond.

Is there still room for a traditional float builder in 2020? Valadie thinks so.

Royal Artists has succeeded in striking a balance between old and new, he noted, both preserving the history of the city’s oldest parades, while also helping keep them fresh through theme, color and craft. When not building traditional floats, Valadie lends his time and talent to newer parades like Krewe du Vieux and the sci-fi themed Chewbacchus. Modern Carnival, he said, brings it all together — old and new, traditional and non-traditional.

“That’s one of the great things about Mardi Gras,” Valadie said. “There are so many different ways to participate in it and to see it and to present it.”

That said, he sees room to grow in New Orleans. Among other goals, he would like to rekindle relationships with a few former Royal Artists clients, including the Krewe of Hermes and Knights of Babylon.

For now, though, he and his team look forward to savoring their first Mardi Gras Day as the creators of the Rex parade. Valadie will be riding the route in a company truck. He and his wife plan on handing out the company’s discarded paint brushes spruced up with gold paint and faux jewels as a custom throw.

You can bet he’ll be grinning.

“I couldn’t really imagine things being any other way or living anywhere else,” Valadie said. “I’m a part of the fabric of the city.”

By the Numbers
Royal Artists, founded in 1975, succeeded Kern Studios as float builder for the Rex Organization after the two decided to end a nearly 70-year partnership in 2019.

20
The number of people employed at Royal Artists Inc. That compares with more than 100 at competitor, Kern Studios.

45
The number of years Royal Artists, founded in 1975, has been in business.

5
The length in years of Royal Artists’ initial contract with the Rex Organization, starting with Mardi Gras 2020.

3
The number of new parades Royal Artists Inc. has added in Mobile, Alabama, in recent years. The firm does Mardi Gras work in New Orleans and Mobile.

151
The total number of floats the team at Royal Artists will build for parades during the 2020 Carnival season, including for clients in Mobile.

28
The number of floats in the Rex parade. Twenty of those will be designed and built by Royal Artists. The remaining eight are signature floats, including the “Boeuf Gras” and the Butterfly King float.

400
The number of Rex members who ride in the parade on Mardi Gras Day. Rex has about 750 members total.

⅓
The share of Rex cup throws that will be made out of aluminum in 2020, part of the krewe’s efforts to be more environmentally sustainable. 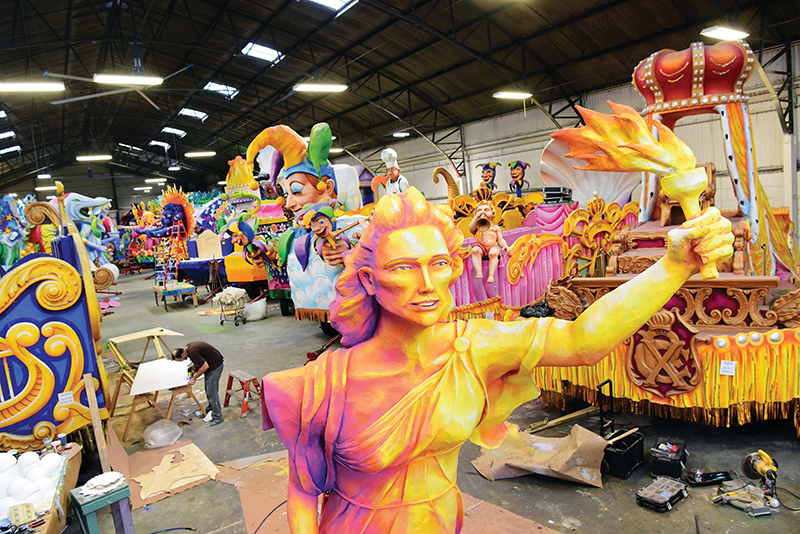 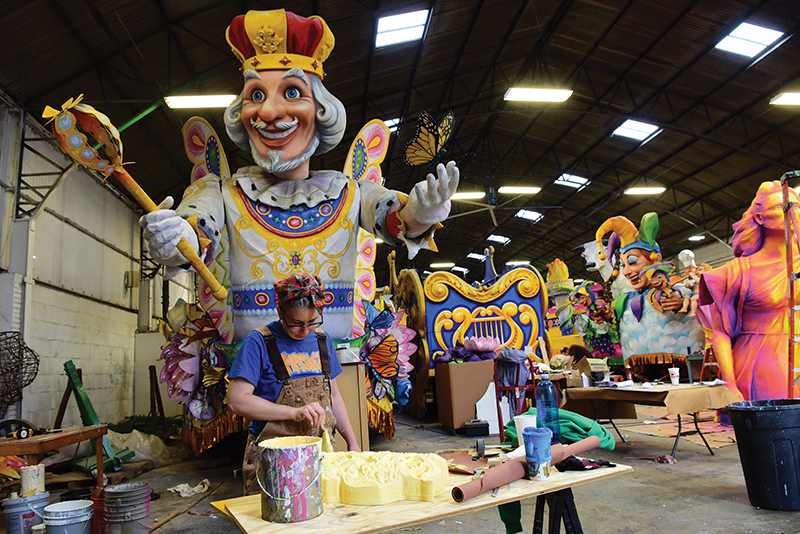 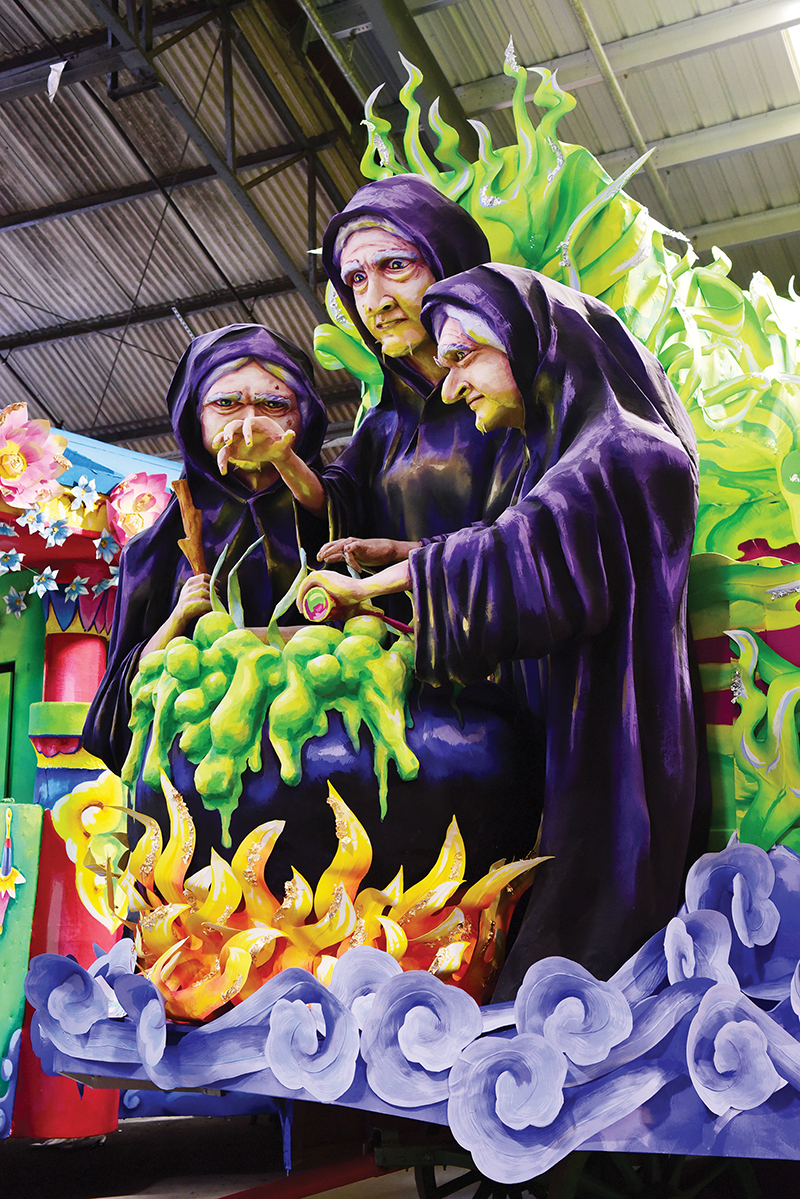 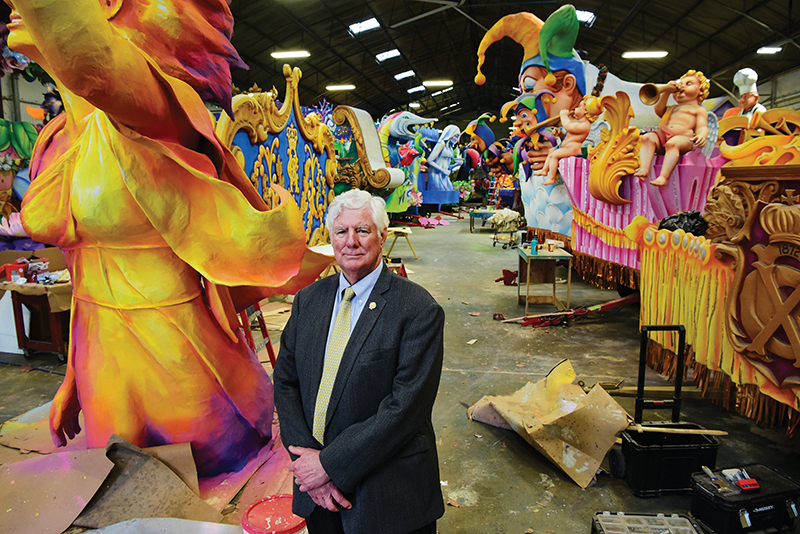 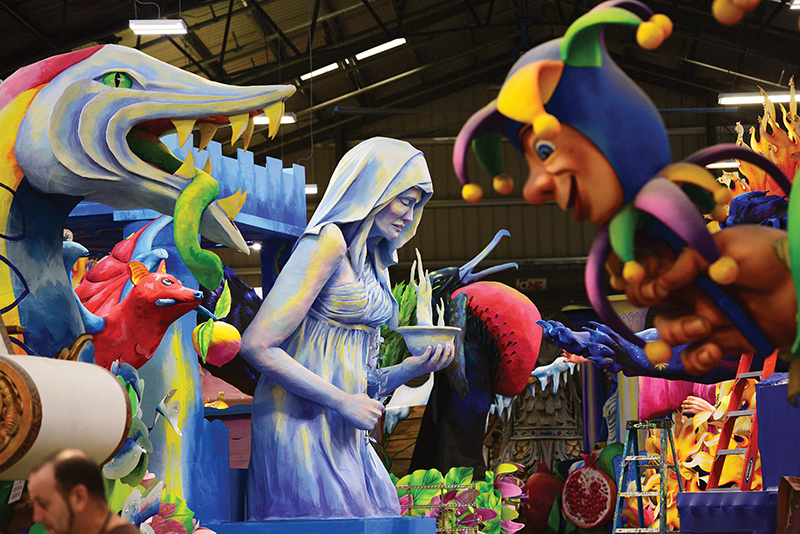