The Queen of Cork

“Tour guides will stop right in front of our store, and tourists hop out of their carriages and they literally buy up the place. That’s because another tourist brought home our one-of-a-kind designer cork handbags and showed it off, and they had to have one, too.”

Amanda Dailey is co-owner of Queork, a unique French Quarter store that sells high-quality cork merchandise, primarily handbags, made from imported cork fabric. Queork is the only cork store of its kind in America, one that deals with, not wine cork, but quality cork material. “We are the ‘first-of-a-kind’ store of just cork,” says Dailey, “which says a lot for New Orleans’ tourism industry when it comes to offering unique shops that are beyond art galleries.”

The Product
Soft and pliable, the cork Dailey uses for her merchandise comes from the bark of cork trees in the forests of Spain, Portugal, Italy and southern France, where it is gently stripped from the trunk. A sustainable product, harvesting cork from a tree actually helps the tree live longer.

While durable as leather — a common fabric for purses and personal items — unlike leather, cork is both stain- and water-resistant.

“The thing about cork fabric is that 88 percent of it is air,” says Dailey. “Under a microscope, it looks like a bunch of balloons.  A leather handbag already weighs 5 pounds with nothing in it, but a cork bag weighs less than a pound and is comfortable as you walk.”

To create cork fabric from the raw material the cork must be hand-laid — a tedious process that adds to the cost of the fabric, and which, while not cheap, is still affordable enough that items can be created for any price point. At Queork, merchandise ranges from $30-$40 dog collars and iPhone cases, to pricier purses that still come under the $200 mark. Queork’s website carries a few higher priced purses, topping out at $279. 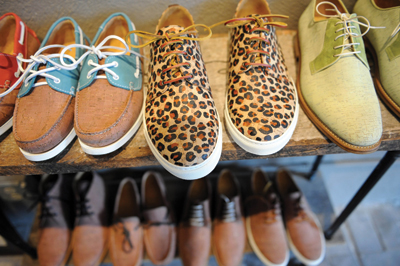 Due to the popularity of her purses, Dailey’s merchandise has expanded to everything from shoes and iPhone cases, to belts and dog collars. A men’s line is forthcoming.

“I’d be rich if I could have 10 more cities like New Orleans to sell my cork designer handbags,” she says. “Location is everything; it means the difference between making it and not making it.”

The remaining customer base for the store comes from regional and international sales (5 percent). Overall, 90 percent of Queork’s clients are women over 50. “They want something different, unique and are passionate about small businesses like ours,” she says. “A lot of people think we go after the vegan market, but the fact is they are not even 5 percent of our business. “

Dailey says she’s recently begun expanding her reach  by going after the male market. “Men come in here and say, ‘I am so upset you don’t have more things for men’,” she says. “Men drag women in our store and say, ‘You have to get one of these bags’.” Dailey says she believes males are attracted to the cork fabric because it is wood and has a bit of a masculine look. “I just got a shipment of men’s shoes and in just a week I’m almost sold out!” she says.

Birth of Queork
Dailey, who has an extensive background in building construction and real estate, says she never dreamed she would be in retail, much less designing and selling cork fabric products. She recalls the first time she was introduced to novelty cork items overseas, a moment which ignited her new passion.

“I was in Portugal, the top producer of cork fabric, and I walked into a gift shop and touched a belt and hat made of the soft fabric, and I was mesmerized by it,” she says. “I loved the fabric but didn’t like the product, and I wanted to make something along the lines of what I would wear. I thought, ‘If I can get hold of this fabric, I can have things made that I like’.” And that she did.

Her first taste of retail began at the Freret Street Festival in 2012, where she sold all 36 of her personally designed basic cork bags within the first three hours. “I never looked back after that festival, and despite the fact that I was born and raised in real estate, I just left it all,” she says.

Her designs, and the location of her wares, have both come a long way in the past few years. What began as a 12-by-12-foot back room in a shop on Dumaine Street back in December 2012 is now 838 Chartres St., a high-traffic store that features a window display with the power to stop tourists in their tracks.

“Families come in and they are blown away, and they often say this is the coolest store I’ve seen during my visit here,” laughs Dailey. “You would be surprised how many people don’t know where cork comes from.  Once we educate them, they transform from someone who admired it, to someone who has to have it, and that is what I think is fantastic!” 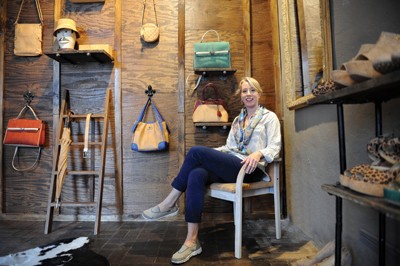 Craftsmanship
The craftsmanship of her designs has evolved from a basic bag to a variety of high-end fashion handbags that are both unique and functional. “All the bags in the store are a collaboration of what people were telling me they like and need,” she says. Dailey’s top seller is the ‘Flapper’ bag, which can hold an iPad or Kindle and has two rings to hold a notepad. It can also be transformed into an evening clutch bag and is a perfect multi-use travel bag. “If all I had to do is sell this particular bag the rest of my life, I would be making a good living because I sell over 1,000 of them a year.”

Due to the popularity of her products, it wasn’t long before Dailey began thinking about what else she could design that would please her eager customers. Her merchandise then expanded to things like shoes, umbrellas and wallets that can float. “We have new things all the time, and each piece is fantastic,” she says. “We have it down to a science.”

The Name
“My business partner, Julie Araujo, whose parents are from Portugal, where I was introduced to cork, started calling me the ‘queen of cork’ as a joke,” recalls Dailey. “So I decided to put the words “queen” and “cork” together, and came up with Queork. I absolutely love it. My business card reads the ‘Queen of Cork’ as my title! People think it is interesting and clever and want to know how it is pronounced, and they think it is French because of the ‘Que’.” 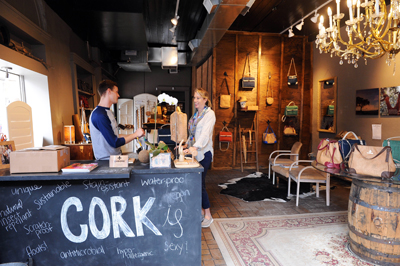 The unique nature of the products is enough to draw both locals and tourists into Queork, where they are greeted by affordable price points — with products starting around $30.

Sales Growth
Since opening in 2012, Queork’s sales have increased by 400 percent. “And we expect at least another 200 percent increase this year,” Dailey adds. From 2013 to 2014, the company’s online sales increased by a whopping 800 percent, a spike which Dailey attributes to publicity from tourists who return home and show off their cork items. Booming sales have had another effect as well: Once sporting a staff of one (Dailey herself), Queork now has a team of seven employees who design, order and sell.

The Continued Struggle
One challenge Dailey continues to face is the struggle to find manufacturing companies who will create smaller inventory orders.

“I buy fabric wherever someone agrees to make it, and we are constantly trying to find a manufacturer to make our products,” she says. But Dailey is hoping the company’s increase in sales will help her cut costs and end the ordering struggle. She says large manufacturers will easily agree to make 5,000 pieces a year – a number she expects to hit soon. “It is by far the reason we have a cork store and no one else does,” she says. “We have lucked out in that we have a relationship overseas, and they see us face-to-face on a regular basis.”

The Future
Building on the success of the French Quarter store (which she says will always be her No. 1 sales producer), Dailey is strategizing her third Queork location (she has a second store in Santa Rosa, Florida, which she opened October 2014). She says she hasn’t decided exactly where the new location will be, but she does know it must be a tourist-driven locale, like a Santa Fe, Key West or Napa Valley.

Dailey also intends on selling wholesale to wineries and boutique retail. “I want to take it to places we can’t drive to overnight,” she says. “But location is so important – you can’t be located one street over from the main street, so we are just waiting for the right place to lease. The rule in business is the faster you sell it, the more money you make, and so that’s the strategy of reaching into different markets.”

For Dailey, Queork is about so much more than just making money, it’s about doing what she loves.

“If I won the lottery today,” she says, “I would buy more cork fabric to make more stuff.” 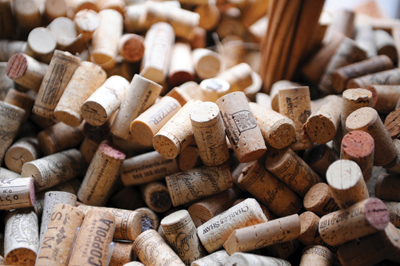 A different cork from that found topping wine bottles, Dailey uses the bark of cork trees in Spain, Portugal, Italy and southern France.