The Power of Two Wheels 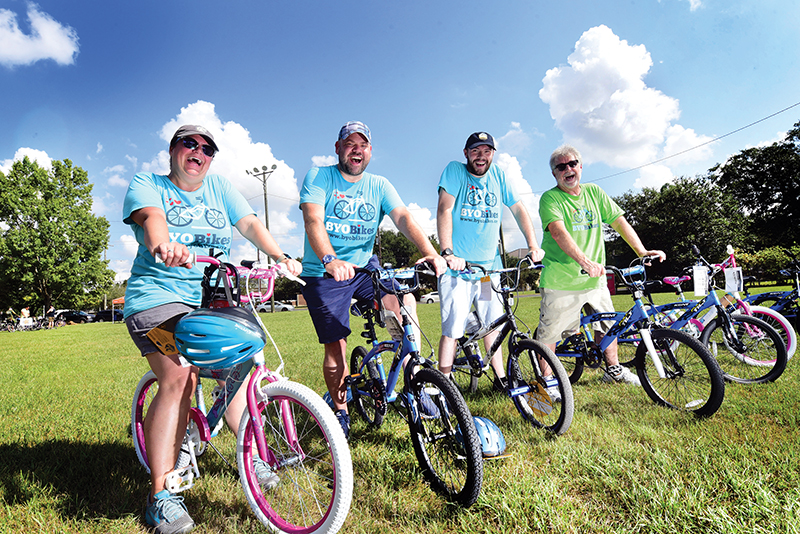 In 1965, an 11-year-old Robin Tate picked up empty Coke bottles from along the river front and from outside the A&P on Royal Street. With money earned from that endeavor, he bought his first bike, a banana-seat Schwinn Sting-Ray. He and his friend, Rickie, both bought their used bikes from a bike shop on Rampart for $35 each.

“Once we had our bikes, we could get a job as delivery boys for Royal Pharmacy and make the big bucks,” he joked. “That bike opened up the world for me way beyond the French Quarter. For example, we could ride down Esplanade Avenue to City Park. Getting that bike was simply amazing.”

Tate is now the president of Tate Entertainment Group and manages tours for clients like Jeff Dunham, Tim Allen, Anderson Cooper and Andy Cohen. He rides 4 miles every morning along the Mississippi River on a specialized bike he purchased from Bayou Bicycles.

Tate’s daughter, Ali Brown, also an avid cyclist, recently downsized and restructured her successful event-planning business, Align Meeting & Events, and moved back home from Tampa, Florida, to be with family and friends.

In an effort to do something for her home city, this past May, she and her father founded BYOBikes—a nonprofit whose vision is to make a difference in local underserved children’s lives through bicycle ownership.

“A bike brought me the freedom to explore,” Brown said. “I want to help children feel that same freedom and joy. I want to use this platform to give back to the community.”

BYOBikes plans to teach responsibility, encourage community spirit, promote a healthier lifestyle and provide transportation to school, work and all the things that every New Orleanian wants to enjoy. It relies on the donations of funds to purchase bikes, volunteers to build the bikes and the assistance of local

community organizations to distribute the bikes.
Brown said the organization would not be possible without the work that’s already been done by city initiatives, such as “Safe Routes to School,” a program administered by New Orleans Health Department.

“Whether it’s on the bus, in a car, or on their bike, we want to give them the skills and knowledge of how to be safe when traveling,” said Jennifer Avegno, MD, director of the New Orleans Health Department.

“New Orleans is one of the biggest bike cities in the U.S.,” said Brent Bogan, president of BYOBikes. “So many in our community can’t enjoy the full benefits of our amazing city due to geographical, economic or transportation issues. We take things like access to a bike for granted but these bikes can get kids to their first jobs or to UNO or to Southern.”

BYOBikes works with city officials, New Orleans Police Department, the school systems, local non-profits and faith-based organizations throughout New Orleans to identify those children and youth who could receive or would be able to earn bikes.

“We’ve been working with the police in the Ninth Ward,” said Bogan. “They work in the community and know who the outstanding kids are. Kids who get bikes can also be recognized by their school’s teachers or advisors; however, they must be living under some socio-economic stress.”

“As a civil servant, I’ve chosen to dedicate my professional career to helping others and bettering our communities,” said Matt Pattin, who also serves on the BYO board and is the chief of operations for the New Orleans Office of Homeland Security. “Working with BYOBikes allows me to build relationships with our youth, who one day will have the opportunity to do the same for the next generation.”

Brown said BYOBikes has already received about $12,000 in donations since its launch. A donation of $150 allows BYOBikes to purchase a bike, helmet, lock, lights, bike registration with the city and attend a mandatory safety class for children and teenagers to take before receiving the bike.

The new organization has also been collaborating with other local bike-related organizations including Rusted Up Beyond All Recognition Bikes (RUBARB). Volunteers began RUBARB in March 2006, after collecting heaps of unused flood bikes, pulling them from garbage piles in the streets, and fixing them up for both residents and volunteers. Today, RUBARB is a full-scale upper Ninth Ward community bike shop run entirely by volunteers.

“I think it’s important to have equity through transportation and to be a resource to our underserved community,” said three-year volunteer David Mezer, who is also an employee at Bike Easy.

Located in the St. Claude neighborhood at 2239 Piety Street, RUBARB is open three days a week (Mondays, Wednesdays and Saturdays). The shop offers visitors the use of its tools free of charge, as well as advice and help from shop volunteers as needed.
“You know the saying, ‘Give a man a fish and you feed him for a day; teach a man to fish and you feed him for a lifetime? said RUBARB volunteer, Liz Lichtman. “Well, we say something like that but it’s, ‘It’s better to teach someone to fix a flat than to sell them a new tire.’”

The shop has become a popular spot for area youth, who enjoy free snacks on Saturdays.

“Anyone is welcome to enjoy snacks with us,” said Mezer, “but it’s the kids who come knocking at our door; we are like a kid magnet.”

BYOBikes currently picks up donated bikes from places like Tulane University, which may have hundreds of bikes abandoned by students. RUBARB used to get some those bikes, but picking them up was a challenge for the small organizations.

“Now BYO brings them to us, and we can fix them,” says Lichtman. “We didn’t really have the capacity to do that, so it’s a great partnership.”

Currently, BYOBikes is concentrating on giving bikes to children and teenagers between the ages of 8 and 15. Plans are to eventually expand that age range from4 to 18 and then ultimately offer bikes to entire families.

Working with small local businesses is an intentional part of the organization’s strategic plan.

“Small businesses in New Orleans are everything,” said Bogan. “We didn’t want to just roll into Walmart and buy 200 bikes.”

BYOBikes gets many of its new bikes from Mike’s Hardware, which sells disassembled bikes to the organization at cost because they believe in its mission.

“I remember my first bike, with all its decorations. It was a growing extension of my personality,” said Rob LeFleur, co-owner of Mike’s. “It extended my boundaries and certainly grew my independence.”

Brown also plans to draw on her background in event planning to involve corporations in BYOBikes’ mission by hosting bike builds as corporate team-building exercises.

“Bicycle Build-Offs” will feature teams that have roughly 30 minutes to assemble a child’s bicycle using a variety of standard tools to assist them in the process,” says Brown of the process. “Even though the assembly is relatively straight forward, on-site event staff would be available to assist any team during the process.”

Following the event, each of the bicycles that was assembled is donated to a child and each of the children receiving the donation is paired with the team that assembled their bicycle.

“This activity can be conducted immediately following the event, or can take place at a later time,” said Brown. “Either way, it leaves a lasting impression on both the children who receive [the bikes] and the participants who had the opportunity to donate them.” 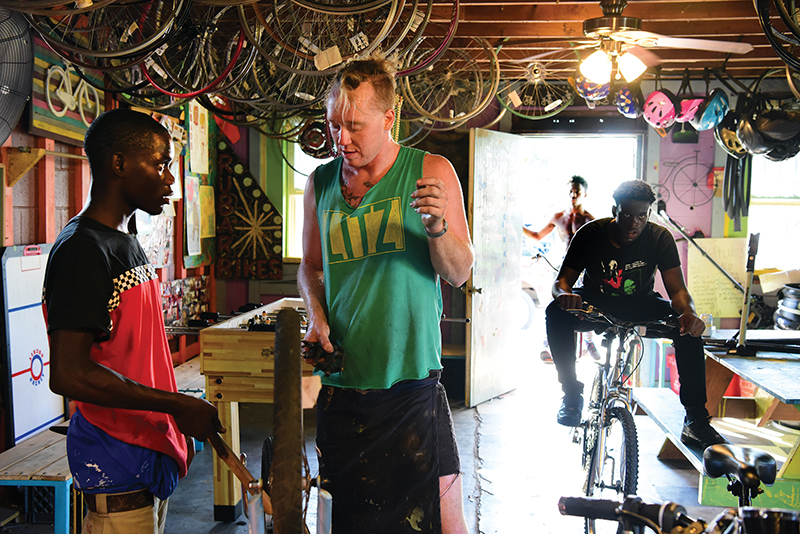 Celebration of the Spokes

A team Bike Build will take place from 3 to 5:30 p.m. with the goal of building 150-200 bikes in one afternoon. Teams of five people can build a bike in 30 minutes. Participants receive discounts on tickets to the festival that follows, which will include entertainment and food trucks.