The Pervasive Power of the Pucker

It’s been 110 years since Joseph Haspel Sr.created the first seersucker suits in New Orleans. Now his great-granddaughteris taking the company into the future.

If you meet Laurie Haspel while wearing a seersucker suit, make sure you’re honest about where it came from, because Haspel, the CEO and fourth-generation owner of Haspel clothing, will quickly discover the truth.

“Often, somebody will say: ‘I’ve got this great Haspel suit.’ So, of course I have to look inside at the labeling,” says Haspel with a laugh.  “It may not be our suit, but they associate seersucker with Haspel and think: ‘If I’m wearing seersucker, I’m wearing Haspel.’ But at the end of the day, if they’re associating seersucker with us, then we’ve done part of our job.”

Steamy Beginnings
For Haspel’s great-grandfather, Joseph Haspel, Sr., inspiration to create the iconic suit came from his time spent in New Orleans factories before the advent of air conditioning. In an effort to stay cool, factory workers were wearing lightweight overalls made of a fabric called seersucker. Haspel saw this and felt that the breathable fabric could be elevated into a dressy ensemble, appropriate for the boardroom, a restaurant or anywhere else a jacket was required.

After designing his first suit, Haspel discovered that he could layer the fabric and cut more than one suit pattern at a time. In 1909, his new company began manufacturing seersucker suits in a facility on Broad Street near Esplanade Avenue.

The menswear clothing company quickly became famous throughout the South for its suits made of lightweight, summery fabrics like poplin, linen, and — you guessed it — seersucker. The suits also quickly became a hit among preppy Ivy -eague students in the Northeast.

Haspel suits were promoted as low-maintenance, “wash and ready,” a fact Joseph Haspel Sr. set out to prove during a stunt in the summer of 1946. After donning a Haspel suit, the company founder dove into the Atlantic Ocean. He then hung the suit to dry and wore it later that day for cocktails.

Joseph Haspel Sr.’s sons, one of whom was Joseph Jr., took over the company in the late 1950s, and continued to promote the virtues of the wash-and-wear fabrics and blends that were both comfortable and stylish.

In 1977, with not a single member of the family’s third generation available to run the company, Haspel Jr. sold the company. But it in the mid-1990s, when the brand went up for sale again, the family swooped back in and bought it. Laurie Haspel, who had been working for a major clothing manufacturer in Atlanta, moved back to Louisiana and joined the team. She became president of Haspel in 2002. The company now has close to 15 employees, spanning the executive, IT, marketing and administrative departments.

Haspel stresses that the company will always be a New Orleans brand, although headquarters are in Baton Rouge, some employees — including the public relations team — work in New York City, the fabrics are made in Italy, and the suits are produced in Tennessee.

Over the past several decades, the Haspel brand has evolved and expanded its reach, amassing clients from coast to coast. President Harry Truman wore Haspel, and so have Hollywood celebrities, including Clark Gable and Cary Grant, and more recently Paul Rudd, Jon Hamm, Jeff Bridges and Jonah Hill.

The danger with having an iconic brand steeped in history, however, can be that your client base is aging right along with you. But how do you preserve the heritage of a brand while drawing in the younger generation? It’s a challenge many companies have faced — think the “This is not your father’s Oldsmobile” commercials.

Since taking over as the company’s first female CEO, Laurie Haspel has been tackling this issue head-on for her family’s brand. 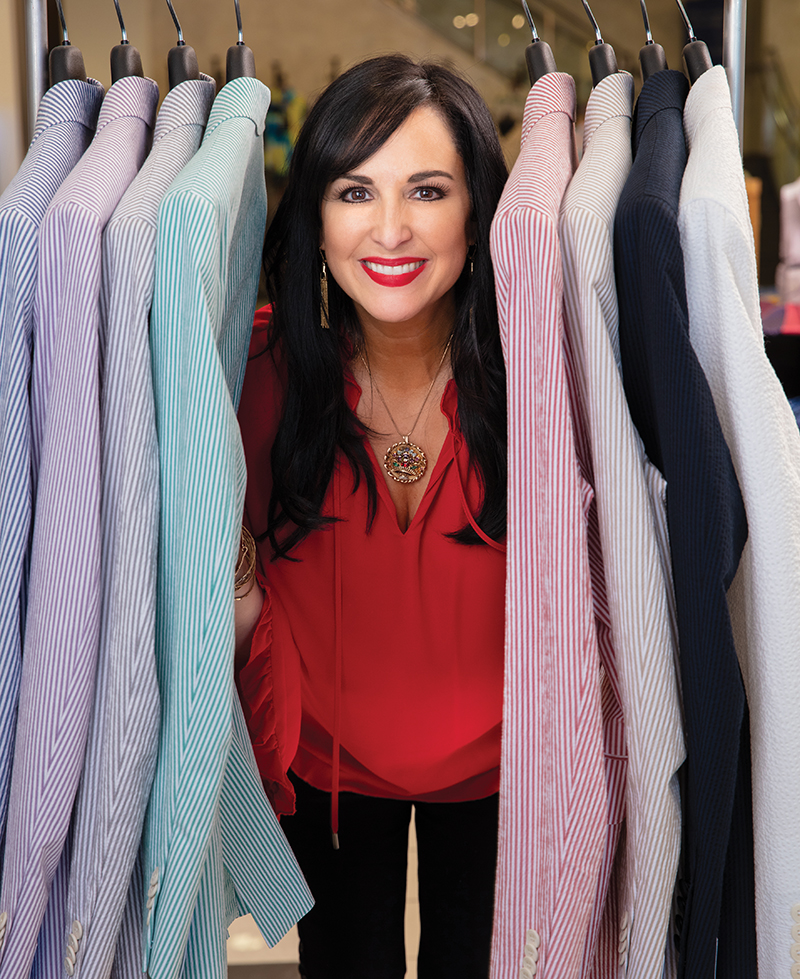 Since taking over her family’s company in 2002, Laurie Haspel has aimed to expand its reach and draw in a new generation of clientele.

A New Model for a New Era
Under Haspel’s leadership, the company moved from operating as solely a manufacturer and wholesaler to a direct-to-consumer model in 2017, which allows customers to shop Haspel’s entire inventory online.

“I’ve always wanted a one-stop-shop, where the consumer can find anything and everything Haspel offers, including sportswear and accessories,” says Haspel, explaining that individual retailers are ever only able to carry a portion of Haspel’s extensive inventory.

Rubensteins on Canal Street is considered Haspel’s “flagship” store, and most significant partner. Their relationship spans decades. Although Rubensteins has always carried Haspel’s clothing, the downtown store recently began selling Haspel’s full selection of spring and summer tailored items, which includes classic suits made of seersucker, poplin, linen and pincord — fabrics that Haspel has produced since the early days.

Haspel also designs sports coats made of a cotton blend containing silk or bamboo — more appropriate for cold weather. Those items appeal to customers who live in the North: New York City is one of Haspel’s largest markets.

“We’re trying to be a little more seasonless, if you will,” she says. “Most of our clothes are meant to be worn all year long,” she adds, noting that the “lightweight clothes can be easily layered, no matter what season it is.”

Seersucker is still a ubiquitous element in most Haspel suits, even when it’s not obvious. The company once created a seersucker wool blend, and Haspel’s navy and black seersucker tuxedo is a bestseller.

In order to remain relevant year-round, Haspel offers seersucker suits in a wide variety of hues, from darker tones for winter months, to lighter spring and summer options.

“Seersucker is essentially what put our company on the map, and it’s still what we’re known for,” says Haspel. “Plenty of other brands have entered the seersucker market, but no one else will ever hold the title of being the originator of the seersucker suit.”

The voice of the brand, Haspel offers creative direction and crafts clever marketing strategies to spread Haspel’s message about who they are and what they sell.

The creative process begins with Haspel’s merchandising team traveling to Italy to find the right fabrics for both the company’s tailored collection and sportswear products. Because Joseph Haspel Sr. was the innovator of technical fabrics (fabrics created primarily for function, not aesthetics), Haspel says the scouts search for mills that offer stretch, resistance and other technical fabric properties.

“Once we gather fabric swatches, we sit down as a team to whittle down the offerings of the upcoming season,” says Haspel, noting that her “tweaking” usually begins after she receives the first set of samples. “Sometimes a garment does not come to life until you see it as a sample, and that’s when my creative side kicks in.”

As for digital marketing, Haspel and her team have carefully identified the profiles of their customers, and are targeting them with tailored messaging. One of the company’s most valuable resources is its robust list of consumer emails.

Men of all ages comprise Haspel’s client base.

“We really make something for everyone,” says Haspel. “We can take that same sport coat, that same jacket, and put it on all three of our age demographics and style it just a little bit differently, and it will still have the same good look.”

Haspel believes much of the company’s recent success stems from its digital marketing and branding efforts. The company’s website and Instagram pages are swathed with images of stylish men, smiling and socializing with friends – often over beers cupped by seersucker coozies.

But many of the most prominently featured clothing items are not even made of seersucker. Haspel’s website promotes and sells cotton button-downs with colorful prints and patterns, polo shirts, stretch poplin pants, and a wide range of accessories, including: American Optical aviator-style sunglasses with a Haspel logo, Terrapin stationery, Mignon Faget cufflinks, Mulholland leather bags, and G.H. Bass & Co. shoes.

Celebrating 110 Years in Style
In celebration of National Seersucker Day June 13, Haspel is launching its Archival Collection, which will feature vintage-style fabrics and silhouettes available on Haspel.com. Only 110 pieces will be produced, and each garment will be numbered and feature a unique Haspel label.

“While seersucker continues to be our mainstay and what people originally come to us for, they find so many other things that are relevant to their everyday lifestyle,” said Laurie. “You don’t have to be in seersucker just to be wearing Haspel.”

The labeling says it all. 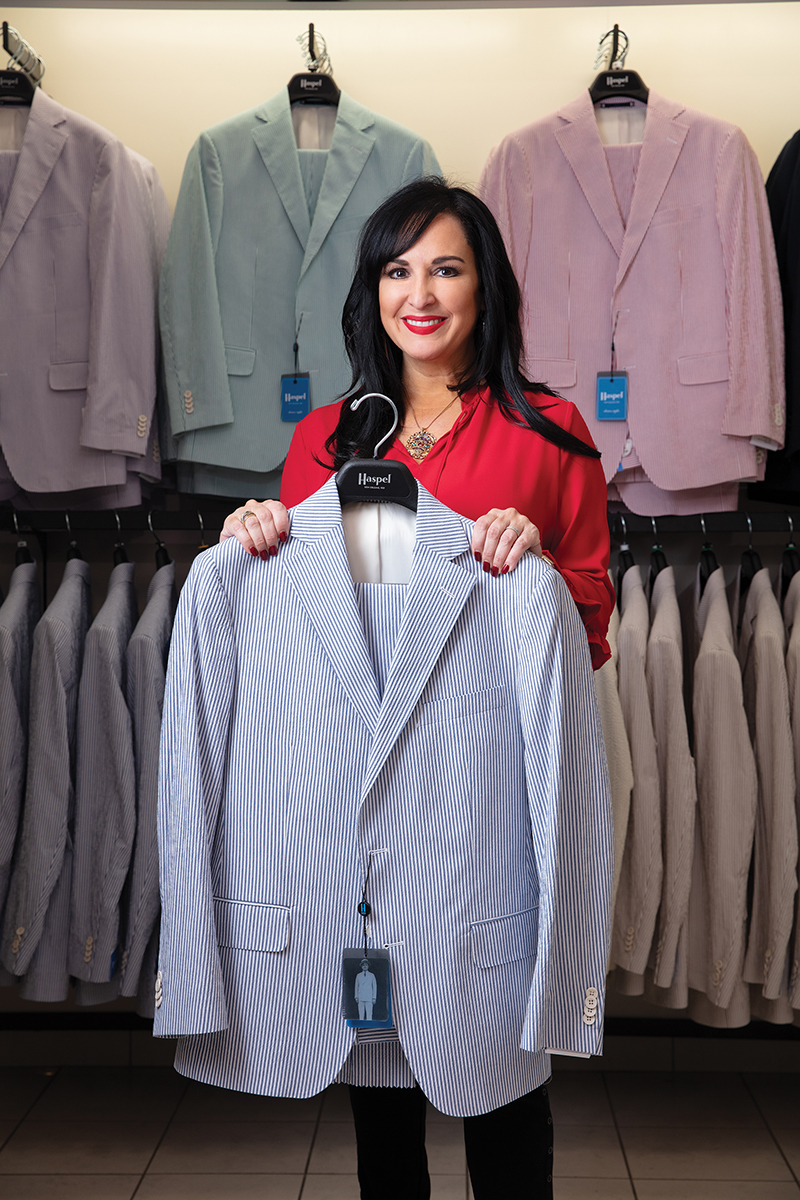 Although associated with a striped print, seersucker is not a fabric but a process where fibers in the material are woven in a way that causes the material to pucker in places and lift off the skin.

How to Wear Seersucker (According to a Haspel Designer)

❶
Make sure you find the right size. Since seersucker has volume, you should choose a suit that’s tailored, and fits well.

❷
The hem of your pants should be ankle length.

❸
Seersucker shorts should look casual and comfortable, rather than stiff.

❹
If you’re wearing a seersucker suit for your wedding, consider one without the traditional blue and white stripes. The puckered fabric is available in tonal blues and even black.

❺
For a casual look, wear your seersucker suit over a simple T-shirt. If you’re headed to a dressy affair, go for a crisp white shirt and a tie with texture (think linen). But don’t wear a seersucker tie.