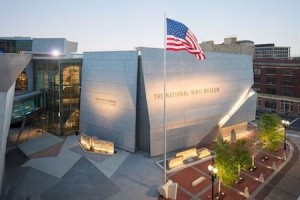 The Board of Trustees works to advance the Museum’s mission: to tell the story of the American experience in the war that changed the world—why it was fought, how it was won, and what it means today—so that all generations will understand the price of freedom and be inspired by what they learn. In addition, the Board’s current priorities include leading the effort to complete the $400 million Road to Victory Capital Campaign and campus expansion, growing the endowment, as well as supporting the development and continued success of significant initiatives in the areas of research, education, and digital access.

The Museum opened in 2000 as The National D-Day Museum and was congressionally designated in 2004 as America’s World War II Museum. Since opening, the Museum has expanded to a campus of six pavilions, created extraordinary interactive exhibits and innovative educational programs, and greeted more than 8 million visitors. Beyond its New Orleans campus, the Museum has reached over 500,000 students through distance learning programs, trained over 4,000 teachers onsite and across the country, and provided online historical content for millions across multiple content platforms. The final expansion projects are currently underway and include the architectural centerpiece Bollinger Canopy of Peace and the capstone exhibit hall Liberation Pavilion, focusing on the war’s legacy of freedom for America and the world.

As Executive Vice President and Chief Financial Officer, Pete November oversees Ochsner Health’s accounting and financial operations while also leading their Information Services, Real Estate, Supply Chain and Partnerships & Integration divisions. November, who joined the Ochsner team in 2012, plays a key role in developing new partnerships for Ochsner Health throughout the Gulf South. With over 30,000 employees, 4,500 providers in over 90 medical specialties, Ochsner Health is Louisiana’s largest non-profit, academic, healthcare system providing coordinated clinical and hospital patient care across Louisiana and the Gulf South. A Certified Public Accountant, he holds an accounting degree and a Juris Doctorate from the University of Kentucky.

For a complete list of the Museum’s national Board Trustees, visit https://www.nationalww2museum.org/about-us/our-team/board-trustees.

Copeland’s Family Meals Provide Funding to Son of a Saint