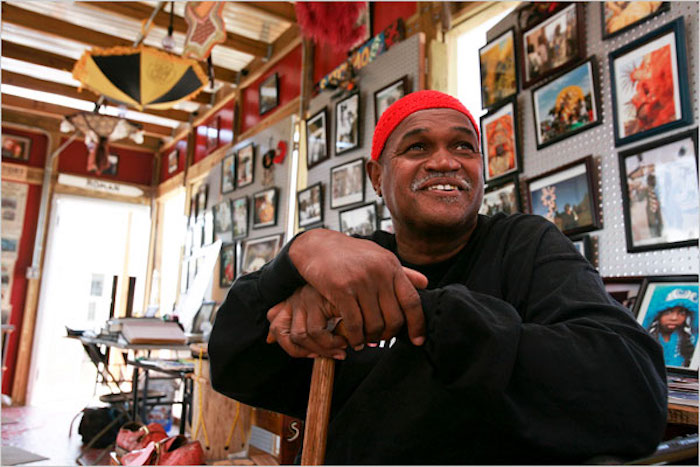 With balmy breezes and gentle sunshine, this Saturday it was easy to forget the city’s crime, boil water advisories and potholes. Mid-morning all along Judge Perez Drive preparations for the Knights of Nemesis parade were in full swing. The Ford tractors were queued up at the RaceTrac filling their tanks as floats stood by in the St. Bernard Civic Center’s parking lot. Tailgaters, lawn chair sitters and energetic children were eager for the bands, beads and delight to begin.

Further up in the Lower Nine on Tupelo Street, Ronald W. Lewis was manning his station as the curator, collector and host of the House of Dance & Feathers.

The House of Dance & Feathers is a cultural museum based on Lewis’ participation in the culture of Mardi Gras Indians, social aid and pleasure clubs and Skull & Bone Gangs. It’s his effort to share this culture with the rest of the world and to pass on his knowledge and these traditions to future generations.

“Outsiders were telling our story,” he says. “People who hadn’t picked up a needle or danced in the streets. I knew I could tell the story. I could be a keeper of our culture and here I am.”

The story goes that in 2003, Lewis’ home was brimming with beads, feathers and memorabilia. He came home one day and found it strewn around the yard: His wife told him he better find something to do with all his stuff.

“So, I moved my artwork and various artifacts I’d collected through the years into the shed in the back,” he says.

“The children in the neighborhood started calling it a museum, so I gave it a name: “House of Dance & Feathers.”

Today, the museum encompasses a 10-foot by 40-foot building and a much smaller but upscale shed. Both are abounding in decorated umbrellas, colorful beads, 8-inch by 10-inch framed color photographs of celebrities and famed Mardi Gras chiefs, Baby Doll outfits, lifetime achievement awards, sleeves of doubloons, Muses shoes, and Carnival costumes and masks. On the walls he’s posted numerous newspaper articles praising the museum, one is from the Boston Sunday Globe. He even has a personal letter from President Obama praising the museum’s efforts.

“I wanted to honor the contributions African Americans made to Mardi Gras,” he says. “This is my cultural education center. With it I want to challenge people to consider who they are connected to and help them begin to understand both the cultures of Mardi Gras.”

Lewis, 68, is more than qualified to spread his mission. He’s been involved in the culture his whole life. He’s the retired president of the Big 9 Social Aid & Pleasure Club and Gate Keeper of North Side Skull & Bone Gang. He’s also the former council chief of the Choctaw Hunters, a Mardi Gras Indian tribe he helped to start. In 2008, he reigned as the king of Krewe du Vieux and he’s been a member of the Krewe du Jieux since its formation in 1996.
Lewis got involved with the culture when he was about 12 years old and says he learned to sew from a spy boy for the Yellow Pocahontas. Even in retirement, he’s still sewing. Lewis just finished a beaded piece that features an Indian riding a horse.

“That’s our passion — bringing a drawing to life with thread and needle,” he says. “You start it and then you sew until you’re finished.”

We moved a few feet away to the small building he calls The West Wing, which opened in 2015. With a jaunty plaid cap covering his head Lewis shuffles, his movement slowed by age, disease and the injurious effects of 30 years working as a streetcar track repairman with the New Orleans Regional Transit Authority.

Lewis says his most memorable Mardi Gras was in 2006, the first one after Hurricane Katrina.

“It was the most emotional one I’ve ever seen,” he says. “Watching people get off buses and seeing them run to one another and embrace, shedding tears and sharing information about where they were living now and wishing they were coming home for good.”

It was a hard one for him too, as he had to return to his temporary home in Thibodeaux.

“It was heart wrenching to leave that night and drive 80 miles away from New Orleans,” he says.

The museum is open from 10 a.m. to 4 p.m. most days, during which time Lewis entertains and educates visitors from all around the world.

“This center has given me an opportunity to meet so many interesting people,” he says. “And I’m going to keep doing it as long as God allows me to walk out my back door and into the center. Once you get involved in the Mardi Gras Indian culture, you’re always going to be involved—it just becomes a part of you.”

Lewis’ book, The House of Dance & Feathers book is available at the museum and from Amazon. More than just a catalogue of the artifacts in the museum, it’s a detailed map of the cultures and communities of New Orleans as experienced by Ronald W. Lewis.

T-shirts That Give Back

T-shirts That Give Back