The Host With the Most

Terry Epton has the zeal of a preacher when extolling the virtues of New Orleans’ tourism industry.

“I can certainly feel the high energy generated as we grow our business on an upward curve each year,” he says, as he looks out a wall of windows from his 14th-floor office in One Canal Place Office Tower at the foot of Canal Street.

It is the largest business of its kind in the area; as well, Epton himself pioneered the business model for modern global destination-management companies.

A New Orleans native, Epton grew up in the Ninth Ward near Elysian Fields and St. Claude avenues and attended Brother Martin High School and the University of New Orleans, where he helped to get the Hotel, Restaurant and Tourism Program started by visiting local high schools to explain the program’s importance and urge students to enroll.

While at UNO, Epton interned at the Royal Sonesta Hotel under the tutelage of Hans Wandfluh.

“He was a great mentor to me,” he says. “I enjoyed learning from an intelligent leader in the hospitality industry.” 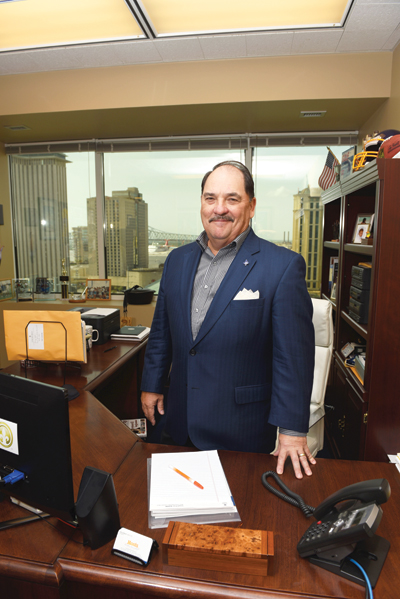 “I was proud to be the [New Orleans Convention and Visitors Bureau’s] chairman of the board when New Orleans was struggling to overcome Hurricane Katrina and rebuild its convention and visitor business.”

Epton joined the Hosts brand in 1982, and his star quickly rose. His comfortable office attests to his success as a leading member of the destination management industry.

“I began as the director of sales in the New Orleans office, and it has been exciting to be a part of such a winning team for over three decades,” he says with pride. “I became president and CEO in early 2006, and it was quite a baptism by fire since in was only a few months after Hurricane Katrina.

“I was proud to be the [New Orleans Convention and Visitors Bureau’s] chairman of the board when New Orleans was struggling to overcome Hurricane Katrina and rebuild its convention and visitor business,” he says. “Today, I often repeat the sage saying, ‘What doesn’t kill you makes you stronger,’ and that is certainly what has happened to New Orleans in general and the NOCVB in particular. The city has made a remarkable comeback, and the CVB is stronger today than ever.”

Ten years after Katrina, Epton is pleased with what the NOCVB is doing. “It now has close alliance with the New Orleans Tourism Marketing Corp. (NOTMC) to work more effectively to promote both the convention and leisure visitor business in New Orleans,” he says. “We are looking forwarding to being a part of the big Las Vegas IMEX travel show in the fall, where people from all over the world will be vying for a part of our business. We will be a part of the NOCVB exhibit and have our own ‘dog-and-pony’ show to promote New Orleans.”

Just back from a trip to Boston where Hosts Global Alliance held its annual forum, through which the company brings together industry leaders to plan for future, Epton says the future looks bright. 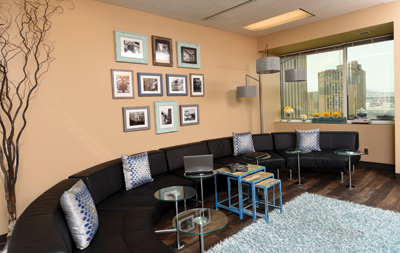 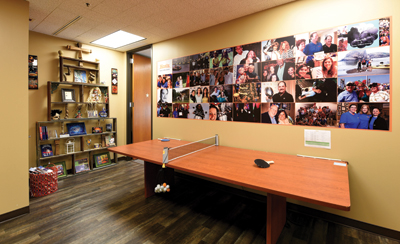 “We definitely see steady growth right here for our business as experts who work with every facet of tourism business, whether it is with the major hotels, the major vendors and suppliers, and/or the attractions that make every large or small meeting and convention a positive experience for everyone involved.”

A display shelf in Hosts New Orleans’ reception area shows off more than a dozen national and international personal and company awards, including the Hats Off Award from the NOCVB, marking his status as a global leader.

And he’s a huge football fan, too, cheering on the Louisiana State University Tigers and the New Orleans Saints.

“I admit to being a ‘crazy’ fan for both teams,” he says — and one look around his office validates this statement.

In fact, Epton has always been a dedicated fan of his entire hometown — when you walk into his office, you can’t miss the big sticker on the back of his computer that reads “Forever New Orleans.” He also is pleased to show off a gallery of family photos near his desk. Married to his wife, Sandra, for 28 years, the couple lives in a Warehouse District condo near the Mississippi River and has “five fine grandchildren,” he says.

Walking down the hallway of the Hosts offices, you might wonder why the company keeps a ping pong table underneath a wall of photos of staff members? “You need a place to relax and remember that you are part of a team of good people contributing to the success of the company,” Epton says. 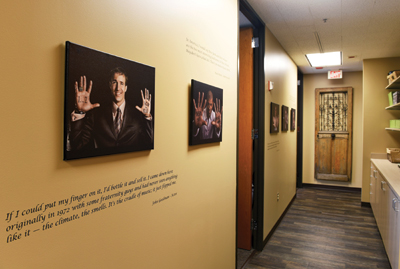 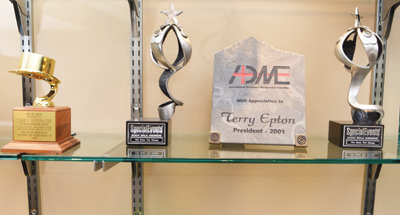 And what’s the purpose of the poster boards with quotes under them in the hallway? “We love the happy quotes about New Orleans,” Epton continues. “One of my favorite sayings is by actor John Goodman: ‘If I could put my finger on it, I’d bottle it and sell it. I came down here originally in 1972 with some fraternity guys and had never seen anything like it – the climate, the smells. It’s the cradle of music; it just flipped me.’”

When Epton was interviewed for a cover article in Corporate & Incentive Travel, a trade publication for corporate and incentive travel planners, he proudly answered why he thinks New Orleans remains such a popular meeting and convention destination. “If there is one word that sets us apart, it’s that we are a truly ‘authentic’ destination that is unlike any other place. We were a European city for 100 years before we became an American city. So we have a different outlook on life here. People who were born here, like me, tend to stay here. And that is why I moved the corperate headquarters here when I became CEO of USA Hosts after Hurricane Katrina. I had been asked by our then-owner on a number of occasions, to move to Nevada or the West Coast, and I declined to do that because New Orleans has a lifestyle and way of existence that is contagious. Once you have experienced it, you just don’t want to be anywhere else. And over the years, that has also come to be true in the hearts and minds of an awful lot of meeting planners and attendees.”