The George Rodrigue Foundation of the Arts continues its namesake’s passion for arts education.

Vincent van Gogh, for example, was prone to serving as his own model, while James McNeill Whistler’s most famous work was of his mother, Anna Whistler.

For George Rodrigue — creator of one of Louisiana’s most iconic images, Blue Dog — it was his small terrier and spaniel mix, Tiffany, who had the honor of being immortalized.

In 1980, Rodrigue began work on a book of Louisiana ghost stories that was to be sold at the 1984 World’s Fair. Among those stories was “Slaughter House,” which starred a very evil dog. It’s never mentioned by name, but the artist was surely painting the infamous loup-garou.

While Rodrigue often stated that Tiffany, his constant studio companion, was in no way the evil dog, her simple shape turned out just right to illustrate his story.

“My father’s paintings look simple because they’re so complicated,” says his son, Jacques Rodrigue, executive director of the George Rodrigue Foundation of the Arts (GRFA). “He also knew the importance of the image and he was careful with it. He knew how not to ruin it or exploit it.”

The George Rodrigue Foundation of the Arts began in response to September 11, when Rodrigue created a “God Bless America” print featuring Blue Dog that raised $500,000 for the American Red Cross.

“With that, my father discovered what the image could do to tell a story in the moment,” Jacques says. “He was also committed to promoting arts education.”

George Rodrigue Foundation of the Arts

Mission: George Rodrigue Foundation of the Arts (GRFA) advocates the importance of the arts in the development of our youth. GRFA encourages the use of art within all curriculums and supports a variety of art educational programs.

Current Needs: GRFA is currently looking for sponsors for its 2018 Annual Scholarship Art Contest to help underwrite each of its 15 scholarship levels. Sponsors are also needed for four upcoming Aioli Dinner events. LAA+ seeks statewide fundraising support year-round in order to continue to add new schools to the network.

Ways a company can partner with GRFA: Sponsor art contests; Serve as judges; Sponsor scholarships; Shop on the foundation’s website for prints, cookbooks and more; Purchase a print and donate it to a worthy cause 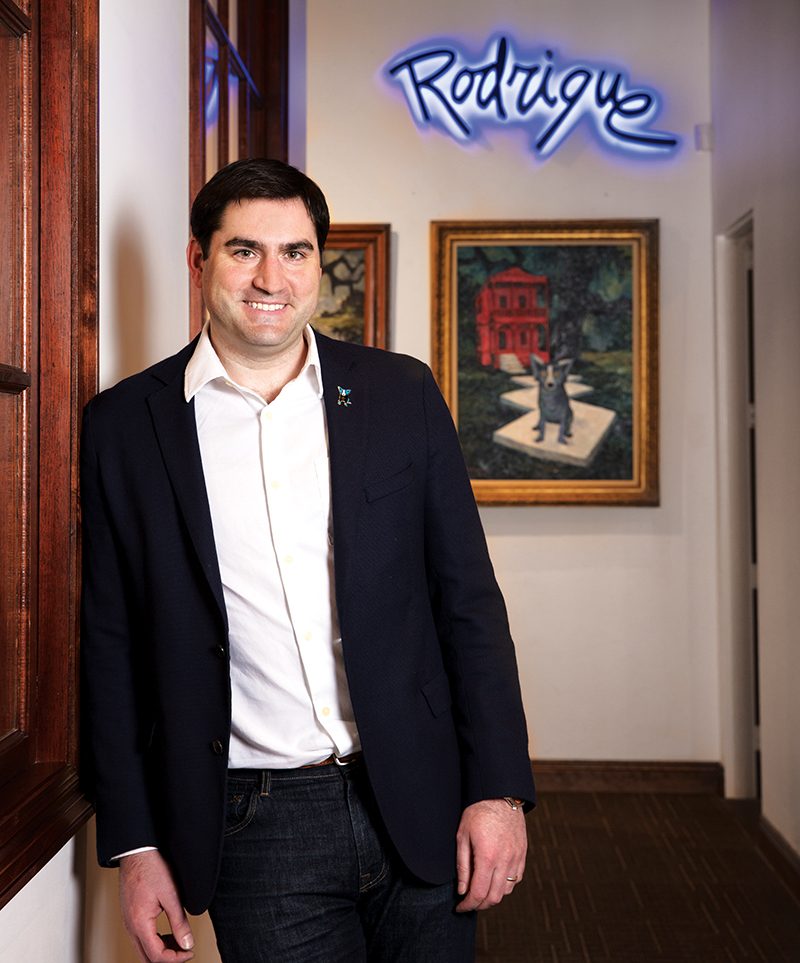 Jacques Rodrigue, executive director of the George Rodrigue Foundation of the Arts (GRFA)

…are dedicated to the power of the arts and education

In a video on the foundation’s website, Rodrigue, who died in 2013, shared his thoughts.

“Art to me has been a driving force in my life. It taught me discipline and it gave me a goal. It gave me a direction where I wanted to go and it changed my whole life. And that’s what I want to do for kids; and that’s what the foundation is about.”

The foundation currently provides a variety of programs that benefit arts education. It continues to offer prints through its Print Donation Program, which has helped more than 1,000 organizations raise more than $3 million at their fundraising events through raffles and silent auctions. An exclusive silkscreen print can be purchased by nonprofits for $500. These prints consistently raise thousands of dollars.

The Rodrigue family recently re-released George Rodrigue’s historic post-Katrina Blue Dog print, “We Will Rise Again” (2005) to benefit schools throughout Texas and Louisiana affected by Hurricane Harvey. The sale of this limited edition print raised over $200,000. The foundation also aided teachers and students with a donation of art supplies to schools that felt the impact of the storm through the efforts of its George’s Art Closet program.

The Art Closet program addresses the need for classroom supplies by awarding art supply kits to art teachers and schools whose funding does not otherwise allow for the expense. Generally, the program awards two $1,000 kits each month to select elementary, middle and high schools across Louisiana. The kits include things like hole punches, glue sticks, tempera paint, watercolors and crayons. Teachers can also choose items they really need, such as a projector or printer.

“Teachers so often spend out of pocket to provide supplies for their students,” said Jacques. “And the arts are the very first thing that gets cut from a school’s budget.”

GRFA also awards college scholarships to high school seniors and juniors through an annual visual arts competition. To many, it’s the first step to making their passion for art a career. The very first winner of the scholarship was Sean Hicks, who is currently pursuing a degree at Savannah College of Art and Design. Hicks is planning to graduate from the school’s master’s program next year, after which he hopes to work in the illustration market.

“The foundation is doing great things, and I hope to return the favor one day for the support they’ve given me,” Hicks said. “They’re like a family to me, and I will never forget how they helped me pursue my career with the scholarship program.”

“It uses some type of art, whether it’s visual arts, music or theater, in every classroom and every subject from math to history,” said Jacques. “We know that creativity can develop better problem-solving skills, more confidence and imagination in our youth. We also know how often we find new ideas through art.”

Hicks sums up the importance of the foundation: “Everywhere you go, you’ll see art in the homes of Louisiana: whether it’s music, the culinary cooking, or of course, paintings. Now, imagine if that part of our culture was suddenly cut off due to limited funds for art programs? The George Rodrigue Foundation is helping to prevent that by funding art educational programs.”

The staff at the foundation, his family, its many partners and all of the students who benefit from GRFA are keeping Rodrigue’s legacy alive every time they create art, learn about how art can enrich their lives or sketch a Blue Dog.

“More than anything, my father loved going to the schools and sitting down with the students to draw the Blue Dog,” said Jacques. “His culture and his passion for art are all a part of his remarkable legacy.” 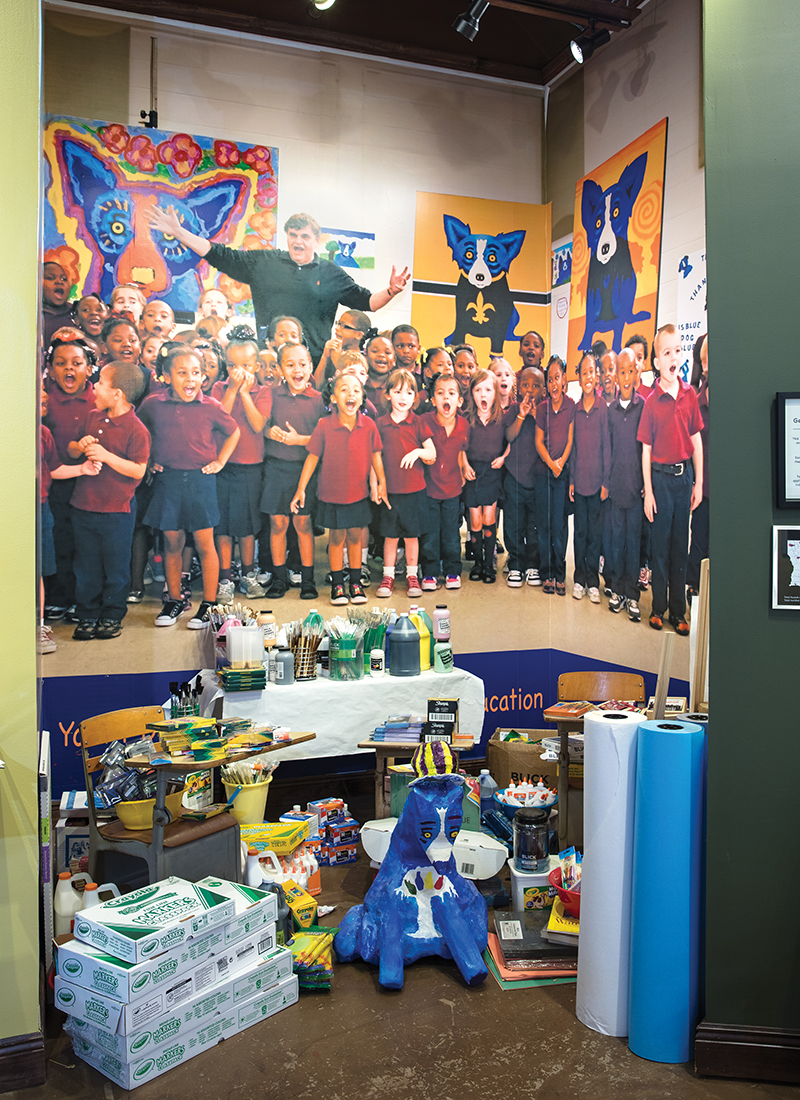 In only five years, LAA+ has trained over 700 teachers in 18 schools statewide. These teachers impact the lives of over 10,000 students and families every day. After several years of success, LAA+ is now its own nonprofit organization, with continued support from GRFA and a statewide board of directors.

Through its annual Scholarship Art Contest, GRFA awards college scholarships to Louisiana high school juniors and seniors selected through an open submission process. Since 2009, GRFA has received over 5,600 entries and awarded a combined $366,250 in scholarships to 135 students.

George’s Art Closet is a program that awards art supplies to Louisiana art teachers whose funding does not otherwise allow for the expense, often bringing arts into classrooms for the first time. Twenty to 25 kits are awarded each year and since 2009, the program has awarded over $200,000 in art supplies.

The GRFA Print Donation Program helps fellow nonprofits raise money at their fundraising events through the use of Rodrigue prints for silent auctions, raffles and more. Since 2010, the foundation has helped nonprofits raise a total of over $3 million.
GRFA has also recently partnered with Tulane Lakeside Hospital’s Arts in Medicine program and the YMCA’s Brushes, Buddies and Beyond for Autism program to provide art supplies and sponsor art events for patients and their families.