The Future of Our Past

You see, it all started in the mid-’90s with two good friends having a glass of sherry in the backyard,” smiles Dr. Nick Mueller, as he reminisces about the humble beginnings of one of New Orleans’ most popular tourist attractions — the National World War II Museum.

It was Mueller’s close friendship with historian and author Stephen Ambrose that gave birth to the idea of preserving a critical historical era right here in New Orleans. Ambrose’s collection of oral histories and artifacts from World War II veterans needed a home that would be accessible to visitors from all across the world.

While Ambrose wanted to put the museum – formerly known as The National D-Day Museum — at the UNO Research and Technology Park, 10 years and $30 million later, the museum instead ended up in its own location in the city’s Warehouse District.

“That’s the best decision we ever made,” Mueller says.

Back in the late ’90s, Mueller, now the museum’s president, was in charge of raising the dollars and opening its doors. “We missed several deadlines and went broke a couple of times, but we finally opened June 6, 2000,” he recalls. “Nothing in my imagination ever thought I would be building a $300 million museum.”

Celebrating its 15th year this year, the World War II Museum is busier than ever — preparing for a new generation and embarking on a $325 million expansion.

BIZ: So running the National World War II Museum wasn’t on your bucket list 20 years ago?

No, but I guess I have myself to blame for that. Once you have a vision and idea, I guess you have to find the resources to acquire those funds to make it all happen. So I had to learn how to do it, and I did a little bit of it at UNO in terms of grants and some fundraising. And of course, Stephen Ambrose was there to help develop this museum, even though it’s a separate non-profit and not a university museum. I guess the CEO and president is the go-to person of any nonprofit in terms of fundraising. Learning to do it basically amounts to talking to people and hoping that you can get people to understand the passion and vision. You want funders to get connected to it… to want to be a part of it. 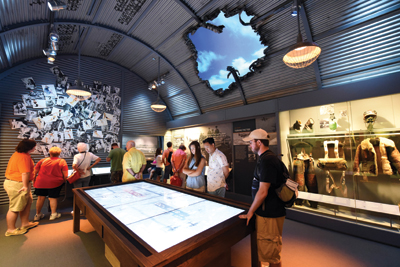 Final Mission: The USS Tang Submarine Experience inside The Boeing Center recreates the interiors of the most successful submarine in World War II.

BIZ: What has been the biggest reward for you and success for the museum?

The most wonderful emotional reward is to see World War II veterans come into this museum and feel proud of their contributions and sacrifices for this country. When you hear them talk about their experiences with their families… it just doesn’t get any better than that. Every time it happens, it feels like the first time. They feel grateful that a group of Americans in New Orleans and around the country, plus the state and federal governments, have worked hard to preserve their history.

The second most rewarding thing is we now have almost 300 employees and we are exporting education programs to students in schools and universities around the world, which has an impact on saving the history of World War II. We are also using the power of the Internet — along with a great staff of educators and researchers — to bring stories to life. These stories will be told forever.

BIZ: How difficult is it to get funding?

It is always difficult. We have a great board of national trustees: 30 percent of them are local and the other 60 percent are from around the country, so I don’t do this alone. We have a great board and development staff. About half of the $245 million raised has come from the private sector, and about $25 to $55 million came from the state, and $33 million from Congress. The funds don’t all come at the same pace. You feel fortunate when one kicks in, even if the other one does not. But we manage to keep it going, and we have two pavilions left to build that we need to raise money for.

BIZ: Who are your biggest private funders?

“Boysie” and Joy Bollinger gave us the largest gift in this museum of $20 million this year. Those funds will build the Canopy of Peace plus other projects, and some of the funds are going into our educational endowment. The next largest donation we received was from the Boeing Corp., which gave $15 million five years ago and helped fund the United States Freedom Pavilion at the Boeing Center. It houses the B-17 and six other iconic warbirds of World War II.

Teddy Solomon and the Solomon family gave us $5 million for the Solomon Victory Theater; Jim Barksdale gave a $5.5 million-dollar gift back in 2003 to support the construction of the final phase of the Battle Barksdale Parade Ground. Several other anonymous donors are supporting the Home Front exhibit and the Liberation Pavilion. Most of the gifts are in the $500,000-to-$2 million range.

BIZ: Where are you with your expansion project?

We’re building a parking garage this year with 450 spaces. We have $30 million worth of construction going on this year in different parts of the campus.

We started raising funds this past year for two pavilions that have yet to be constructed — the Liberation Pavilion and The Hall of Democracy, which are about $30 million each. We are also talking to developers about financing the construction of a hotel and conference center next to the parking garage. The most immediate thing is the opening of the Road to Tokyo exhibit, which will happen this December. All of these are permanent exhibits that carry the narrative of World War II from the beginning to the end.

When will the Hall of Democracy and Liberation Pavilion be completed?

We are hoping to complete the funding and start construction on both of them in 2017, with completion in 2018 or 2019. We are behind schedule because Katrina set us back a few years. We had hoped to be finished by now. 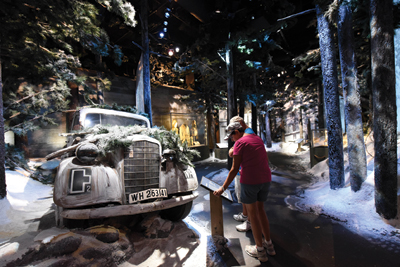 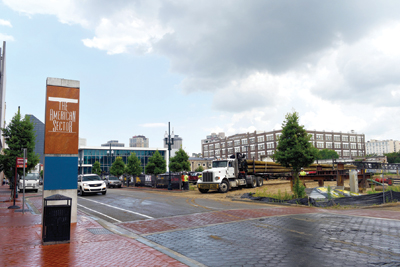 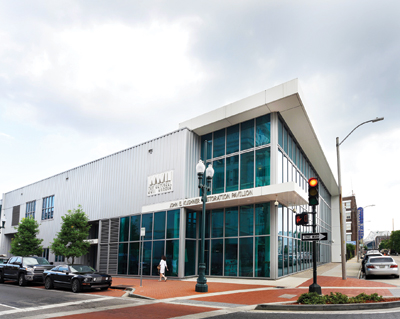 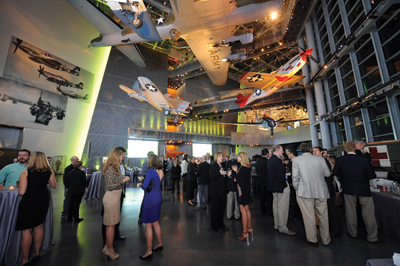 TOP LEFT: Battle of the Bulge exhibit. TOP RIGHT: This year’s $30 million in construction includes a 450-spot parking expansion. BOTTOM LEFT: The John E. Kushner Restoration Pavillion, a 14,000 square-foot facility where visitors can witness the restoration of various WWII artifacts, including boats and military equipment. BOTTOM RIGHT: The museum serves as a popular location for fundraisers and other social events.

BIZ: What does this expansion mean in terms of size?

It seems there’s an urgency to complete the work.

Yes, there has been a sense of urgency from the beginning because, when we started, no one in Congress or the country was worried about a museum to honor the sacrifice and heroism of those who served in World War II on the home front and the battlefront. That war preserved our way of life, our freedom and our democracy. It is urgent we get this done now because we only have about 1 million of those 16 million veterans still living. We said from the beginning, 25 years ago, we have to finish this museum while there are veterans still alive to visit.

BIZ: What is the biggest challenge facing the museum today?

We need to raise another $100 million to finish the museum. The second-biggest challenge is to build the blueprint for the education outreach research capacity in the coming years. Once all the brick-and-mortar is done, we have to look at how to serve schools across the country. It’s going to take money and time. We have to build a virtual pavilion with intellectual resources and technological engines that can export our content around the world. That challenge will never go away, and we have to keep getting better at it.

BIZ: How much have visitor numbers expanded?

There have been 4 million visitors since we opened and we’ll hit 5 million in a year or so. Eighty-five percent are from outside the state. Initially, we had about 300,000 come through our doors during first few years, but we went down to almost zero with Katrina. We’ve bounced back in a big way, though, plus many millions more are coming to us via social media and online.

We are currently ranked No. 4 in the United States by TripAdvisor for most popular museum in the country, with the Smithsonian  (National Gallery of Art) behind us and (other) big art museums in front of us.

BIZ: Where do you think the National WWII Museum will be in 10 years?

I am sure the museum will be increasing its impact on visitors, students and young future generations. We will be teaching teachers and having resources and materials that will be in classrooms all across America, as well as participating in partnerships with universities and providing conferences and travel programs on military history for teachers and students all over Europe. I’m confident that the story of World War II will be of great fascination to Americans and people from all over the world — not just in 10 years, but a century from now.