The Civilizing Effect of Beauty

“A book to read, a couch to faint on, a fancy tumbler to drink out of, and a solid silver spoon to feed oneself and those dear.”  That’s a quote by Patrick Dunne, writer, antique dealer, historian and accomplished raconteur, about what Southern style means to him.

His store, Lucullus: Culinary Antiques, Art and Objects is housed in a charming 19th century building located in the heart of the French Quarter near Jackson Square. The story goes that while at Galatoire’s Restaurant, enjoying a bottle of Mersault wine and trout meunière, Dunne had an epiphany: New Orleans was known for great food and great antiques why not combine the two. So 35 years ago, he started his business and named it after the successful Roman general, Lucullus, who was known for his sumptuous banquets.

The store specializes in culinary antiques from the 17th, 18th, and 19th centuries. It offers rooms full of curated treasures ranging from rustic breadboards to fine French Empire walnut armoires.  The pieces are designed in a series of culinary vignettes so customers can easily imagine supping at an elegant dinner party or enjoying lamb and mint jelly around their grandfather’s mahogany dining room table.

Dunne procures his inventory from all around the world from auctions and out of people’s homes. Though he spends a great deal of time in France, he doesn’t have any geographic favorites. He’ll buy a pewter goblet from England or a Meso-American molcajete (used to crush and grind spices) from Mexico.

Lucullus boasts an international clientele of sophisticated shoppers. Martha Stewart considers the store one of her favorite places to shop. “I’ve done some damage to my pocketbook at this store,” she says in a video interview with Dunne. 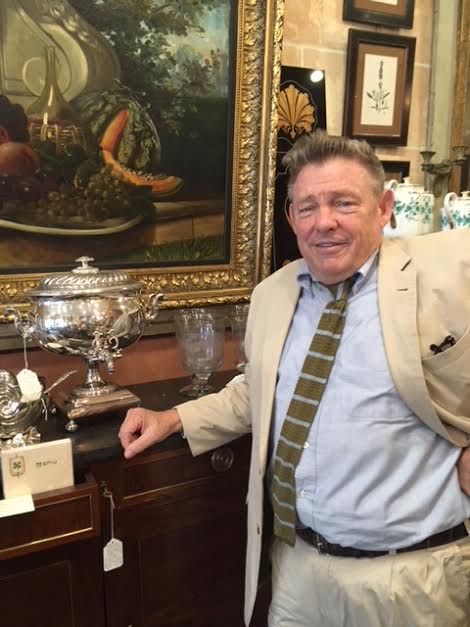 Dunne is a walking encyclopedia about his inventory and the many customs and cultures that surround his treasures. For example: “Never cut fruit with a steel knife; there was a ban on flour during the Napoleonic Wars; and women would purchase plain white soup tureens and then hand paint them so each piece was unique to that household.”

Recently, Dunne started using social media to reach a younger clientele. He and his staff are quite active on Instagram and Facebook. The posts are humorous and warm and convey the same feeling of graciousness and joy that imbues his brick and mortar store.

“It took me a while to get on board but now when things post I’m constantly checking to see how many likes we have or how many followers we’re up to. I got ecstatic when we reached over 1,000 followers.”

He wants people to know that his store is not a museum; it’s not a scared place and he wants them to feel free to repurpose the antiques. By the way, he also thinks owning antiques is a very environmentally friendly way to live.

“To understand that someone sat in that chair, cooked with that copper pot or toasted loved ones with these crystal glasses, can fill you with a wonderful nostalgia of comfort. And I believe the love of beauty has a civilizing effect and we need that now more than ever.”