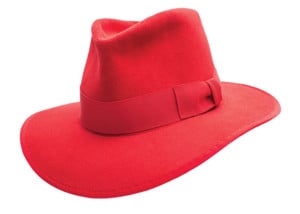 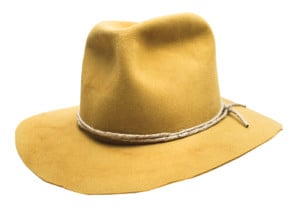 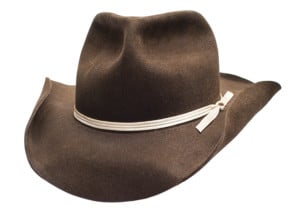 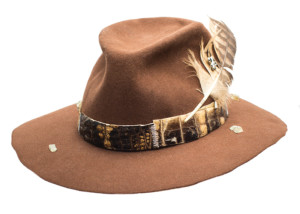 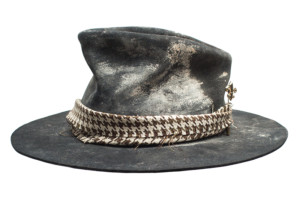 Designer Colby Hebert wears many hats…literally. Hebert is an actor, businessman, designer and, most passionately, a hatmaker.
Hebert’s business originally got its start as Colby Hebert Chapeaux, a little store front in his hometown of New Iberia. Hebert moved the business to New Orleans in October 2017, landing on Magazine Street as The Cajun Hatter.

“I’ve been interested in hats for as long as I can remember,” he said. “I’ve been into fashion and costumes all my life, and I’ve always tried to find ways to express the character in me through my fashion. Hats were always an easy go-to. A hat can set you apart, but in a subtle and elegant way.”

Hebert entered the hatmaking industry in 2015 after flipping an acting career for design and transforming the phrase “Made on the Bayou” into an actual trade.

“After trying my hand at acting, I ended up finding my way into the costume side of the film industry,” Hebert said. “There, for several years I developed my interest and knack for fashion while quickly becoming associated with hats. Later, while watching a YouTube video of a hatmaker, it just hit me like a lightening bolt that this was something that I would love doing. It just made sense. I could design fashion and express myself and my culture through a medium that I was already passionate about. So the rest is history.”

Hebert is careful to classify his work as a “hatmaker,” rather than a milliner, a designation that implies something much more formal than his designs.

“‘Millinery’ is something that I don’t tend to associate myself with: It’s more specifically the making of hats (usually for women) through methods that are quite different from what I do,” he said. “They are usually very formal hats for specific events for example, and employ very different methods. The blocking and shaping of unisex hats intended for everyday use is usually simply referred to as “hatmaking,” which would make me a hatmaker, or hatter, or…Cajun Hatter.”

Hebert’s styles are specifically designed to appeal to both men and women, and are both for casual and formal occasions.

“My hats are for everyone. I mean really,” he said. “One of the most essential aspects of the nature of my brand aesthetic is versatility. My hats are, in essence, formal and elegant things that have been made a bit more casual and relaxed with some added character. It’s totally as fine to wear a hat with jeans, for example, as it is to wear a sports jacket with jeans. They fit in every situation.”

With an increase in attention to fashion detail, a more casual working attire and social media status updates on style via Instagram and Facebook, hats are in line and on trend for both male and female buyers. Hebert’s business model embraces the trend and runs with it.

“My hats are unisex. Let me be clear that the kind of hats that I am making are what would traditionally be considered ‘men’s dress and western hats.’ However, it so happens that fashion has become immensely more casual than the era during which these styles of hats were considered more masculine in nature,” he said. “The kind of hats that women wore in that same era are far too formal for today’s everyday wear. As such, this kind of hat is the most appropriate style for either gender to incorporate into their fashion. My clients literally are all over the map in regards to gender, age, heritage, etc. In the nearly two-year period that I’ve been making hats, I have equally served men, women, young and old, though if I’m being very specific, I have more female clients.”

Men’s Shopping Is On the Rise

According to a 2016 poll by fashion public relations firm Boutique @Ogilvy, on the whole, men spend an average of $85 per month on clothing and accessories, as opposed to $75 per month by women. Men also spend more time shopping, at an average of three hours per week, with women spending two-and a-half.

The trend has been in play for several years, with men outspending women in the U.S. and in Europe and sales continuing to rise.

This rise in the menswear business and spending may be attributed to several factors, including:

Menswear costs more to manufacture;
More availability of men’s accessories;
The growth of online shopping;
Relaxation of office attire rules;
Increased interest in grooming, and finally,
Men make more than women on average, and therefore have more to spend.

Hebert sees the hat trend not as something on the horizon, but as an essential part of an accessory wardrobe that is current across the country. He says New Orleans, and the hatmaking industry here, is simply playing catch-up to fashion centers such as New York, Miami and Los Angeles.

“Hats are not coming back, hats are back. But as usual, the South is behind,” he said. “Every state out West, and especially California, has seen a huge resurgence in hat wearing, and therefore hatmaking — in New York it’s the same, as well as Miami. Los Angeles and New York City each have at least a dozen or more hatmakers, all thriving despite the competition. About five years ago, there may have been 30 hatmakers left in the country. Now there are about 200 or so.”

While Hebert may have originally been inspired by film sets, his creations are more works of art than costumes. Inspired by life in Louisiana, the Cajun Hatter’s style embraces local culture with a nod to Old World tradition and craftsmanship.

“So much inspires my work,” he said. “I find inspiration in every corner. However, being born in New Iberia, I am so prideful of my Cajun culture, and this inspires my work more than anything else. My ancestors came from France, a very elegant, dignified, and prideful nation. Then, after decades of an attempt to settle in ‘Acadie’ in Canada, they were drug through the mud, burned, beat, bruised and kicked out. Through their persistence they eventually reached and settled in the beautiful prairie land of Southwestern Louisiana. My hats tell this very story. They are elegantly crafted works of art that are then distressed, aged, and burned, which imparts a life, soul and history of its own into each design. I suppose at the end of the day, that makes me a storyteller, much like many of my ancestors.”

Each hat is made by hand at Hebert’s Magazine Street shop, and most are custom, made to order. He says his materials are sourced locally when possible and are sustainably harvested.

“All of the materials that I use are the same materials that have been used for the past several hundred years,” he said. “We use 100 percent fur felts that are sourced here in America. Beaver fur is the preferred and most popular as it is the highest quality, longest lasting and most durable option. It’s also sustainably harvested. Other options include rabbit fur, for a more economical price, and mink for a more exotic and luxury option.”

It’s Hebert’s attention to detail that sets his creations apart.

“Being that most of my work is custom, my customers are a huge part of the inspiration. For each hat, I basically create something that is a reflection of that very individual through my vision and interpretation,” he said. “I absolutely do see myself as carrying on a special tradition. Like I’ve mentioned, hatmaking has been an endangered craft and through incredibly hard work and persistence I am doing my part to change that. For the record, there were no other hatmakers (not milliners) in Louisiana with this traditional skill that I could learn from. This has made my job much more difficult, but it’s been worth every minute.”

A new line of designs debuted in January of this year, all of which reference the cultural atmosphere that continues to inspire Hebert.

“I am releasing a line of ‘brand icons’ that are styles exhibiting every color, shape and style possible, while each design will be tied to a specific South Louisiana cultural concept,” he said. “Styles such as ‘Voodoo Queen,’ ‘Magnolia,’ ‘Streetcar’ and ‘Poboy,’ for example. After this, I am considering working toward the release of a full unisex clothing line that follows the same brand aesthetic.”

Prices for Cajun Hatter creations depend on the type of material used, time to make and design of the piece, with starting prices ranging from $300 to $1,800.

“Every single hat is made start-to-finish, right here on 4516 Magazine Street,” Hebert is proud to state. “When I was located in New Iberia, I used to say ‘Handmade on the Bayou,’ but now I suppose we can say ‘Handmade on the River’…[it’s] what I call ‘swamp-chic.’ New Orleans is not just a hat city, it is THE hat city.”

Topping It All Off

In addition to The Cajun Hatter, there are a variety of hatmakers and milliners throughout the city, including: