The glass-walled conference room has a privacy screen with images from throughout JazzFest’s history. JazzFest posters and photos are extensively employed throughout the space.

The New Orleans Jazz & Heritage Festival is celebrating 50 years this month, and while Festival Productions Inc. (FPI), the company behind the iconic event, moved into its new offices at 365 Canal St. at the end of 2017, a remodeling of the space to reflect the work and culture of its tenants was only recently completed.

Projects and Planning Director Dana D. Perry had a vision for the 13,000-square-foot office suite on the 22nd floor at Canal Place and, along with the team at NANO LLC, was able to bring it to fruition.

“We’re an eclectic bunch,” said Perry. “The thought process was, ‘How can we bring modern [flair] into something funky?’”

That question is answered as soon as visitors enter through the glass doors. The entry features a reception desk and just left of center, two Matrix “Italian Plum” chairs with walnut accents situated in front of it. To the right of the door there is a striking, angled wall made from cypress, which Perry says was created to both separate the entry from the reception area and to define it. Each sleek, modern element however, is juxtaposed by one or more eclectic pieces. In the case of the reception area, new is paired with old with the inclusion of a custom door, created by folk artist Charles Gillam, from the former Camp Street offices hung with care on the left flanking wall.

The glass-walled conference room behind the reception desk is adorned with a privacy screen made from images that depict JazzFest’s history. JazzFest posters and photos are extensively employed throughout the space. Just outside the human resources department’s offices, the lighted, metal JazzFest letters used in the festival’s CD tent decorate a dark accent wall.

The company embraced the history of its immensely popular event and told its story in the space for its staff and visitors, but Perry emphasizes that the group’s large-scale event production happens year-round and includes other popular annual events like Essence Fest, Bayou Country Superfest and full-scale, one-time events for clients including the NFL and NBA.

The extensive collaboration required to seamlessly merge all of those areas in the final product of an event necessitated an open office plan for several key departments. The 14 separate offices maintain visual openness through the use of glass walls. There is a small conference room, in addition to the large one near the entrance, and various casual seating arrangements dot each department.

The attention to detail in the décor and space planning echoes what Perry said is at the heart of the team’s work.

“FPI’s singular list of special events is our calling card,” she said. “Anyone who attends an FPI event can perceive the level of attention to detail in every area, and we believe that is what sets us apart.”

The staff is still getting settled in since the remodel and Perry said the biggest challenge right now is to zero in on what’s working and what isn’t as they use the space and tweak it as needed. This meshes well with the company’s overall objective and philosophy of excellence in its production work.

“Our goal at work is universal,” said Perry, “to create a top-notch experience for festival-goers and event attendees.” 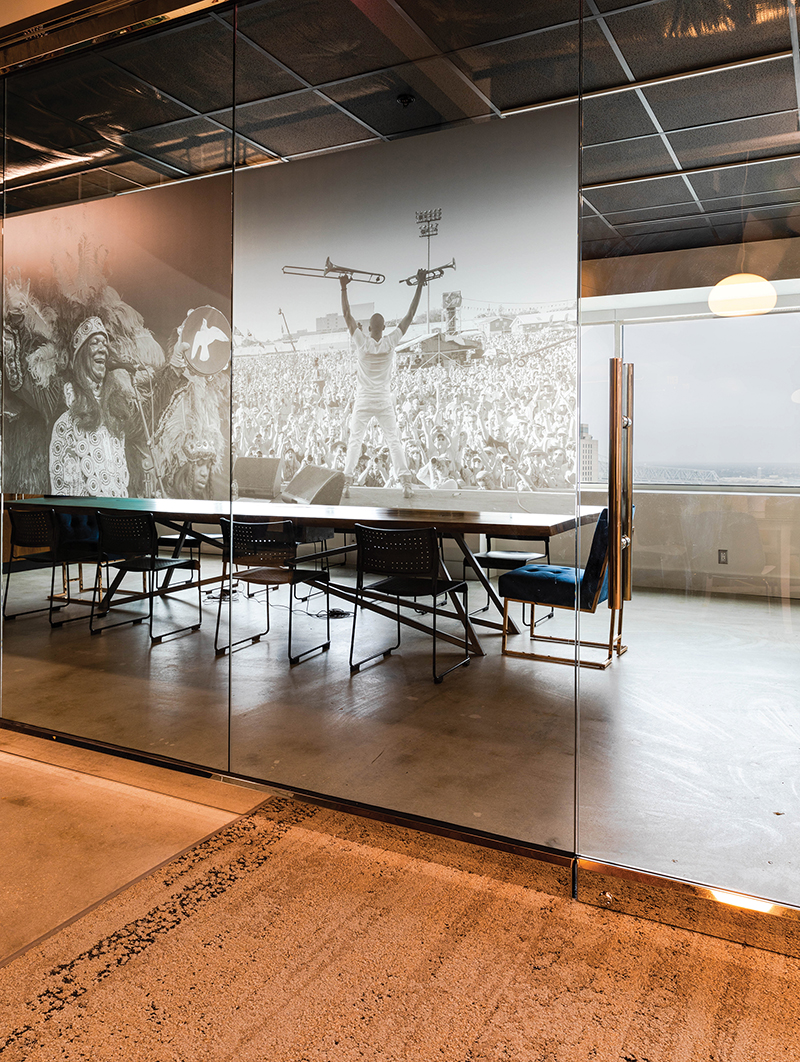 A wood, metal and glass divider wall separates two of the company’s departments, while still allowing for openness and easy collaboration. 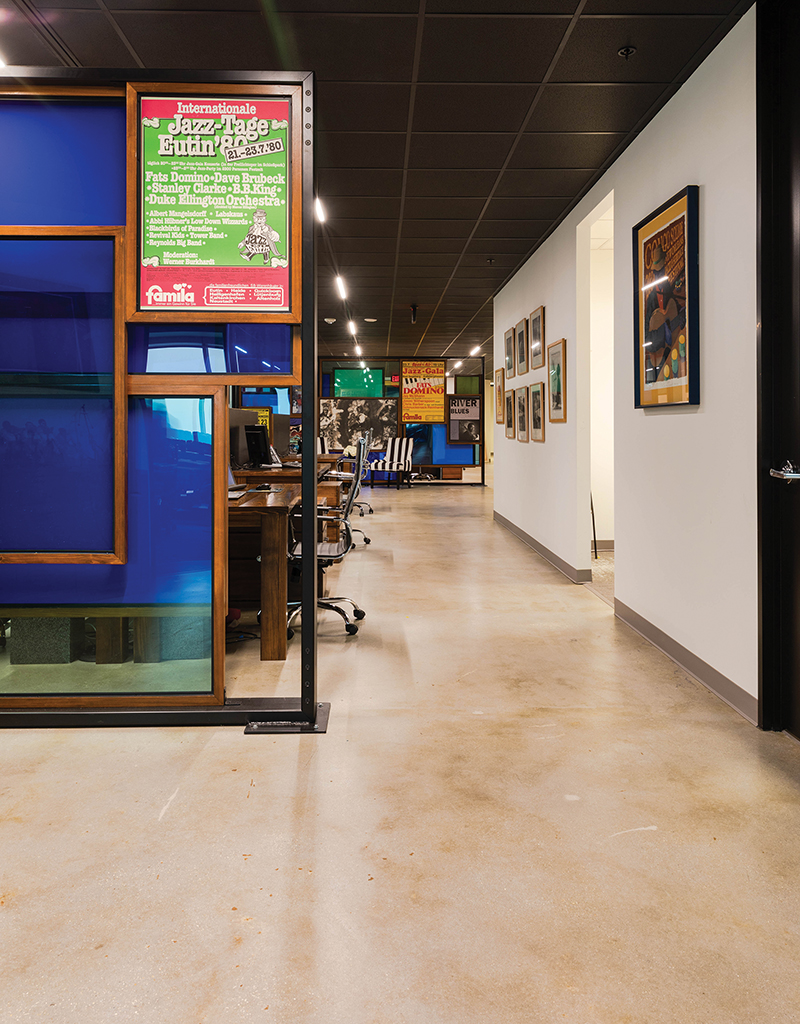 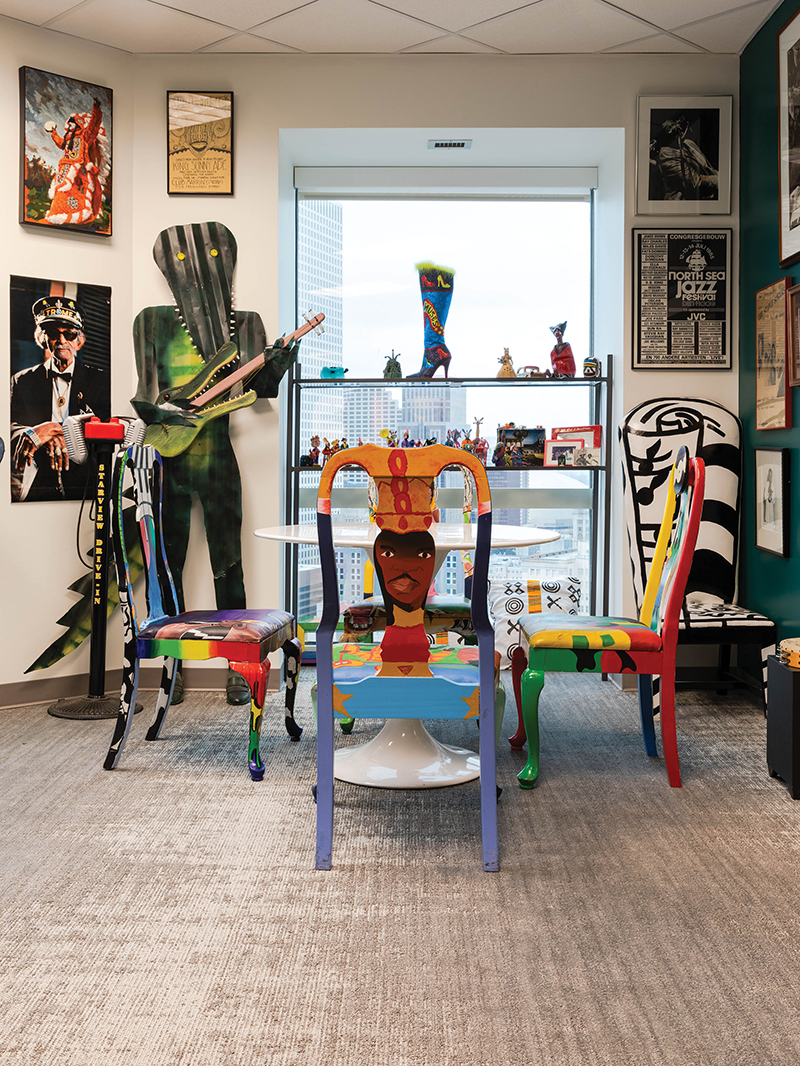 In CEO Quint Davis’ office color abounds. Multiple collections of art, posters and other memorabilia are employed throughout the room, which is flooded with light. 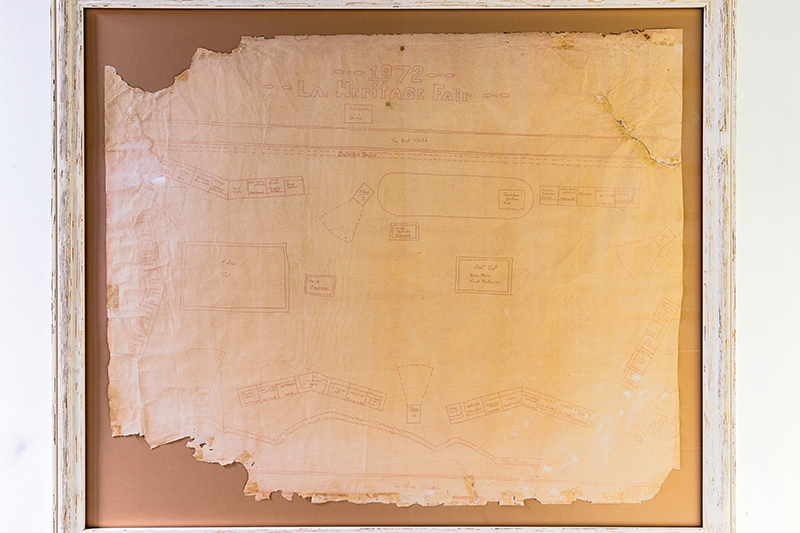 A sketch of the first JazzFest map hangs in the hallway. 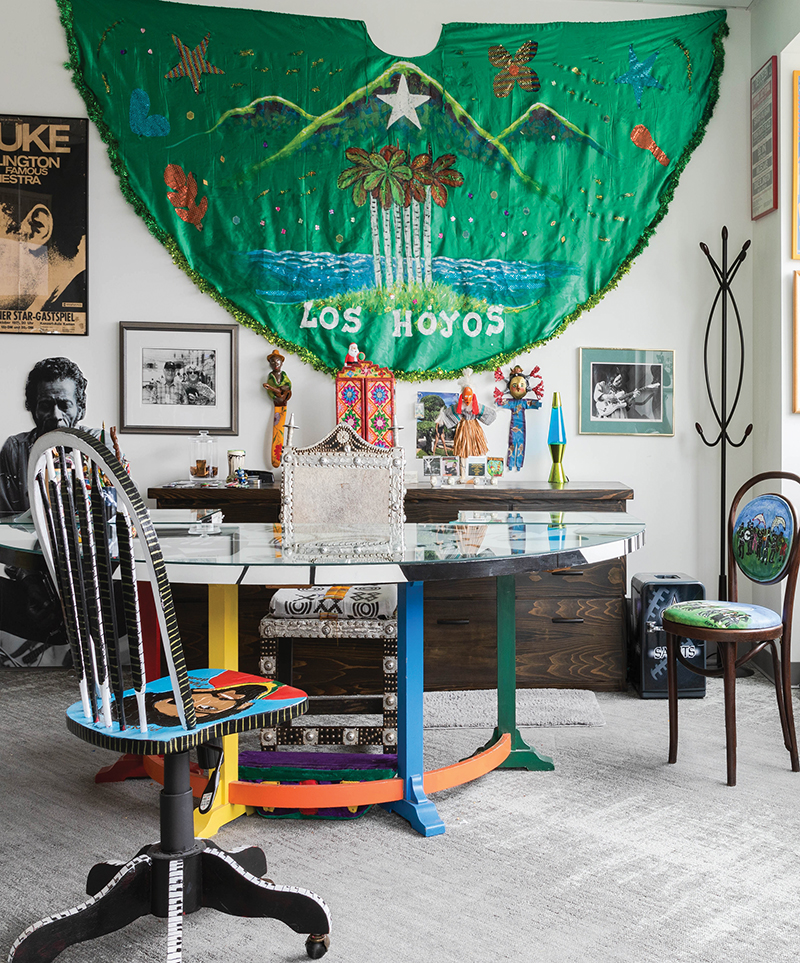 The decorative theme of CEO Quint Davis’ office is music and color.