MANDEVILLE, La. — The new Target store opening on Oct. 23 at 3450 Highway 190 is smaller than the company’s typical locations and closer to another Target store than it would normally be, but the general merchandise retailer had to get creative to pull off an expansion in a booming Northshore market.

Commercial real estate agency Stirling Properties was there to provide guidance throughout the process.

“COVID accelerated the trends between winners and losers in the retail world,” said Marty Mayer, Stirling president and CEO. “Retailers like Target, who had already begun to position their brick and mortar stores as fulfillment hubs, were the winners.”

All that success meant that company executives were fired up to expand. In December 2020, the head of Target’s real estate division reached out to Stirling in the hopes of finding more space adjacent to the retailer’s existing store in Covington’s River Chase development. 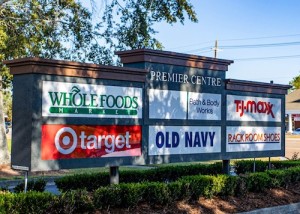 “At that time, we had nothing available to offer them at River Chase, so we re-opened a dialogue about a small format store in Mandeville,” said Mayer, who believed he could carve out space for a Target at the Premier Centre, about seven miles from River Chase.“This is very unusual in a suburban location because they generally only consider having two stores in such close proximity in very dense urban settings.”

Mayer said Stirling used geo-fencing software from Placer.ai, which shows foot traffic data for any retail property, to make a case that the two properties would complement one another. One factor that wouldn’t surprise any Northshore resident is that local traffic is congested enough that the distance between the two shopping centers feels farther than it is.

Although Target’s stores are usually about 130,000 square feet, the retailer decided that if Mayer could find at least 50,000 square feet at Premier Centre, which is anchored by a Whole Foods Market, then it would move forward with a buildout.

Finding that space took a lot of legwork.

“It was a really, really complicated deal,” said Mayer. “We had the vacant Steinmart, which was 34,000 square feet, but then we had to work out a way to move the Rack Room Shoes that was next door. We had to expand the rear of the building and of course we had to cut the economic deal with Target.”

Another challenge? Several other tenants on the property have language in their leases that place restrictions on potential neighbors, so Stirling had to work out accommodations with each of them.

“Whole Foods was the main one because they want to restrict how much square footage [in a neighboring store] can be devoted to food and how much specifically can be organic food,” he said. “So now Target can only have 10,000 square feet of food in that location.

Mayer said these types of deals are more common now that the Northshore is getting more and more crowded.

“You have to solve problems for them,” he said. “It used to be: ‘I want this box.’ And they could get their way, but now retailers and other customers have to be more flexible in terms of size and format.”