Take Me to the River

With five straight record years for total travelers, New Orleans has grown into the nation’s sixth-largest cruise port. At least 24.2 million travelers worldwide are expected to cruise this year — more than a million of which will visit New Orleans on one of the 19 unique cruise ships that dock in the Big Easy.

Most of those vessels will be ocean-going cruise ships, which usually carry thousands of passengers at a time to destinations across the Caribbean Sea and Gulf of Mexico. But as experienced travelers look for ever-unique opportunities, a two-century-old form of travel is once again blossoming on the banks of the Mississippi River. Greater New Orleans is home to one of the fastest-growing niche travel markets in the United States: river cruises.

Gretna in the Game

The latest addition to river cruising in the region is the French America Line.

On Oct. 22, the brand new cruise line’s flagship riverboat, Louisiane, began its inaugural voyage up the Mississippi River, with a sold-out boat of 150 passengers, from the Gretna Ferry Terminal. The terminal sits diagonally upriver across from the Port of New Orleans’ cruise terminals under the Crescent City Connection.

Designed with the aesthetics of a 19th century riverboat, the Louisiane is powered by diesel rather than steam engine and paddlewheel. Its itineraries include waterways that were under French control at the time of American colonization — the Mississippi, Ohio, Tennessee, Cumberland and Red rivers.

Selling Luxury on the Mississippi

The Louisiane’s Captain, John Cook, who hails from Pittsburgh, says he couldn’t be happier with the assignment. “This boat has such a great flow,” he says. “A lot of times boats are built like this that don’t take into account the flow of traffic, but this one does. Every detail was carefully crafted.”

Cook says for someone in his line of work, guiding the Louisiane is a dream job. “I worked on tow boats before this and we wouldn’t set foot on land for sometimes 30 days,” he says. “This is one of the best jobs sailing out there today — we’re at port every night.”

Cook’s favorite spot onboard is the Veranda, a French Bistro-styled room at the stern that offers delicacies to diners almost around the clock.

All fares include overnight accommodations the night before the cruise at some of the country’s most recognized hotels, including The Peabody Hotel in Memphis, Gaylord Opryland Resort in Nashville, The Hotel Monteleone in New Orleans, and The Doubletree at Union Station in St. Louis. 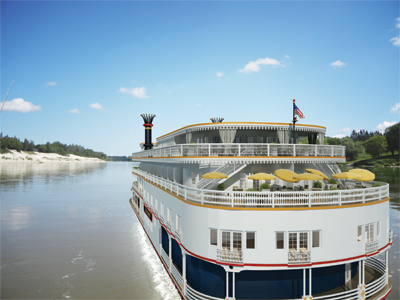 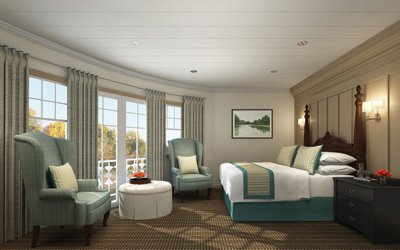 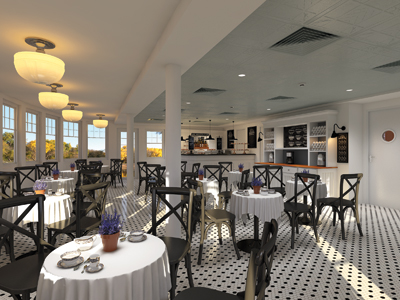 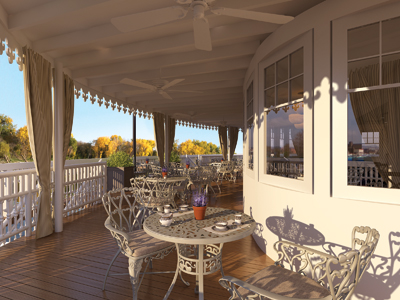 TOP LEFT: River cruising is one of the fastest growing niche travel markets in the United States. TOP RIGHT: Onboard acomodations range from expansive suites reaching 267 square feet (shown here is the Panorama State Room) to 140-square-foot inside staterooms. BOTTOM LEFT: Captain John Cook says his favorite spot on the Louisiane is the Veranda, a French Bistro-styled dining area at the stern. BOTTOM RIGHT: “Our market is the affluent, well-traveled individual that has probably cruised on ocean liners before, but is looking for a luxury experience a little closer to home,” explains French America Line Chairman, Christopher Kyte.

“It’s a boutique experience,” says French America Line Chairman, Christopher Kyte. “These are all legendary, iconic hotels. We want to present the best experience we can. These hotels help expand the luxury we want to offer.”

True to its name, The French America line is decidedly French.

“The entire theme onboard is Louisiana and its French heritage,” says Kyte. “From a Creole dinner menu to beignets and café au lait by Café du Monde, we wanted to make it a floating bit of New Orleans.”

True to New Orleans style, the vessel also boasts Southern and Continental cuisine by Chef de Cuisine, Regina Charboneau. “We’re so excited to have Ms. Charboneau aboard,” Kyte says. “She was recently rated by Gourmet Magazine as one of the top 10 chefs of our time.”

Also like New Orleans, the Louisiane is a blend of vintage flair and modern convenience. It’s the only American river cruise line with iPads® in each suite and stateroom, pre-loaded with e-books, shore excursions, daily programs and menus.

The Louisiane includes 75 suites and staterooms in seven categories, all situated on the top three of the intimate riverboat’s four decks. Accomodations range from the 267-square-foot Richelieu Suite, which features panoramic views — which wraparound outdoor promenade— to a 140-square-foot inside stateroom.

The riverboat offers amenities expected on ocean cruise ships, including a full-service spa that offers body treatments and nail and hair services, and pairs them with the gourmet influences of France. Upon embarkation, guests are treated to Parisian-style macarons overnighted fresh from the famed House of Ladurée’s New York City boutique and Vosges Haut-Chocolat with the nightly turndown service.

From the West Coast to the Gulf Coast

Formerly known as the Columbia Queen, the Louisiane used to sail Oregon’s Columbia River. This summer, after being purchased by the French America Line, the boat made the 33-day trek from the Pacific Northwest, through the Panama Canal, to Gretna.

“The Louisiane was actually the largest item to ever go through the Panama Canal on top of a ship,” Kyte says.

On August 8, the riverboat arrived at the Gretna Ferry Landing to be refurbished by Harvey-based Bollinger Quick Repair.

“Due to delays going through the Canal, we actually had roughly 60 days to do work that would typically take six months,” Kyte says. “Bollinger turned somersaults to make it happen. It was great timing for them too, as they were at the point of having to lay off dozens of workers.”

JEDCO and Louisiana Economic Development helped finance a portion of the project to aid in the vessel’s relocation from Oregon.

“We’ve been excited since the beginning of this project,” says Jerry Bologna, executive director of JEDCO. “New Orleans is a region already recognized as an international tourism destination and this just adds to our arsenal. Plus, it adds another company headquarters to our region, along with work for our local vendors and jobs for our citizens.”

In addition to helping to retain jobs at Bollinger, the Louisiane employs an on-board crew of 83 and the company’s downtown Gretna headquarters will include 17 employees.

“All our jobs are full time with benefits that begin from day one,” Kyte says. “The average income is $41,000 a year and we pay 100 percent of benefits. These are good jobs.”

French America Line has so far invested more than $7.5 million in the cruise line and expects an estimated local economic impact of $58 million.

“This is a major economic development opportunity for the city of Gretna,” says Gretna Mayor, Belinda Constant. “This project will bring quality jobs with benefits to our residents, and complements our vision to continue making Gretna a destination within the Greater New Orleans region.”

Tourism officials say river cruising is gaining in popularity because experienced cruise travelers are looking for new, different ways to experience regions and destinations, and riverboats are able to sail unique waterways not accessible by larger vessels.

For clientele, the draw is the experience of a unique perspective.

“Our market is the affluent, well-traveled individual that has probably cruised on ocean liners before but is looking for a luxury experience a little closer to home,” Kyte says. “Europe is great, but I don’t think anyone looks forward to a 10 hour trip.”

They are the clientele the local tourism industry craves.

“The visitors who frequent the Mississippi River cruises are usually a bit older in demographic and have a larger disposable income than cruisers in general,” says Kim Priez, the New Orleans Convention and Visitors Bureau’s senior vice president of tourism. “These smaller vessels allow everyone to get to know each other a bit better than the larger vessels that cruise in deep water.” 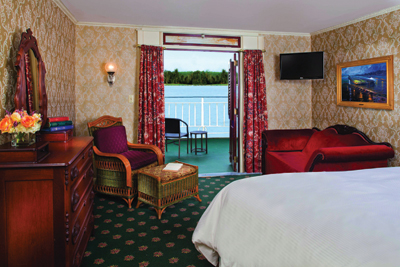 When non-local passengers cruise out of New Orleans, they generally look at it as two vacations in one. They might come a few days before the trip or stay a few days later to enjoy the city and its offerings.

“The Port’s cruise terminals are easily accessible to more than 30,000 hotel rooms downtown and in the French Quarter, and there’s lots to do just steps away, including Mardi Gras World, the National World War II Museum, the Ogden Museum of Southern Art, art galleries on Julia Street, and the Aquarium of the Americas,” says Matt Gresham, director of external affairs for the Port of New Orleans.

The method of cruising itself is also a novel experience. Paddlewheelers evoke a sense of history and nostalgia for a bygone age. Mark Twain and images of Tom Sawyer, Huck Finn and glamorous showboats traversing the Mississippi’s currents come to mind. Capturing that feeling is a major lure to modern river cruises.

While cruising at an average speed of 11 m.p.h. on the Louisiane, experts including professors, authors and historians offer enriching talks and informal chats to share insights into the diverse history, culture, food and music of the areas along the waterways they visit.

Topics around New Orleans often include regional history, including American Indian, plantation and Civil War history; the origins of American music including jazz, blues, zydeco, bluegrass and other traditions; the formation and religious underpinnings of Mardi Gras; nuances of Southern cuisine; the history of classic American cocktails; and the socioeconomic impact of changing agricultural practices on the Mississippi Delta.

Connecticut-based American Cruise Line launched the America in May and the Queen of the Mississippi in 2015. The six-deck America carries 185 passengers, while the five-deck Queen of the Mississippi allows 150 people onboard. Both feature guestrooms ranging from the 445-square-foot owner’s suite with private balcony and panoramic views to 203-square-foot single suites. Neither boat has inside staterooms.

The Memphis-based American Queen Steamboat Co. operates the six-deck American Queen. The paddlewheeler is decorated with woodwork and antiques in the American Victorian style. Its rooms range from 348-square-foot owner’s suites with a 690-square-foot veranda and personal river butler to the 132-square-foot inside stateroom with a queen or two single beds.

The Port of New Orleans expects the three boats to draw 21,000 passengers this year — about 2 percent of the port’s overall cruise business.

Next year, the most recognizable name in the river cruise industry will drop anchor in the Crescent City.

“More boats are coming,” says Gresham. “Viking River Cruises has announced the Port of New Orleans will be its North American homeport. They’re still working through their federal requirements, so we’re not sure of their timeline yet.”

When things do get finalized, New Orleans will be the home port for the international line’s first North American itineraries. The original plan, reported in 2015, was to bring two riverboats (each holding up to 300 passengers) to the French Quarter and add four more in the next three years. The move is expected to result in hundreds of new jobs.

THE LOUISIANE AT A GLANCE

• Built in the United States

The Crescent City is the nation’s sixth-largest cruise port, and growing.

• Economic impact on the region: $406 million in spending in Louisiana, more than 8,000 jobs which provide $323 million in income, and $78 million in out-of-pocket spending.

• More than 21,000 river cruise passengers are expected to sail out of New Orleans this year — about 2 percent of the port’s overall cruise business.