Like most Saints fans, I love the Superdome. So I was thrilled this week that after years of discussion, the latest round of renovations to the Mercedes-Benz Superdome will kick-off in early 2020.

I’m not old enough to have experienced games at Tulane Stadium, but I can remember being in that number at Saints games in the ‘Dome since I was a toddler.

Its design is genius – a stadium essentially inside of a steel and concrete shell that has allowed for renovations and modernizations which has allowed it to long outlive most if not all of its contemporaries, including the Astrodome in Houston, the King Dome in Seattle and the Silverdome in Detroit.

While the Superdome is not as old as Green Bay’s Lambeau Field or Chicago’s Soldier Field or baseball’s Wrigley Field or Fenway Park, it is iconic and, this week, plans were made to ensure it will be around for future generations to enjoy.

On Thursday, the Louisiana Stadium and Exposition District (LSED), known colloquially as the Superdome Commission, approved the first phase of the planned $450 million makeover, which is at the centerpiece of negotiations to keep the Saints in stadium through 2035, with options to extend the lease until 2055.

“We’re on the goal line,” Superdome Commission Kyle France said in reference to the agreement with the team.

The modernization of the 44-year old Superdome, which will be funded with $210 million from money the LSED receives from a local hotel tax dedicated to its operations and revenue it receives from events, $150 million from the Saints, $90 million from the State of Louisiana, will add numerous fan amenities, allow it to remain competitive with newly-built stadiums, and cost less than half of recently constructed stadiums for the Dallas Cowboys and San Francisco 49ers.

The renovation will work around Saints’ games and the mid-summer Essence Fest, so that the events are not disturbed.

Much of the $100 million first phase, which will run through calendar year 2020, will take place behind the scenes. It includes building a large kitchen and food-service area in the current parking deck and adding new exits.

The following phases will see the elimination of 80,000-square-feet of the ramps behind stadium seats, which will create open atriums at the northeast, northwest and southeast corners of the stadium, new elevators and escalators, windows to allow natural light to enter the stadium, expanded concourses for vendors, bathrooms, fans moving around the stadium, field-level end zone boxes, and standing room only (SRO) areas.

“The strategy here has been to enhance the quality of experience for the spectator at all levels: general seats, club, the suites, and now there is going to be SROs,” said Victor “Trey” Trahan, CEO of Trahan Architects, the design firm for the renovation.

On Thursday, Trahan released the first renderings of the planned renovation. Construction will be handled by New Orleans-based Broadmoor.

Seeing the plans for the Superdome has to get Saints’ fans blood pumping. In the years after Hurricane Katrina, the stadium has received a number of upgrades that have modernized it from the dinginess it was falling into before the storm. While the ramps evoke a happy childhood sentiment, I’ll be happy to bid them adieu. Wider concourses at all levels of the Superdome will be welcomed. Right now, they are way too narrow and have obstructions in places that jam up the corridors, slowing traffic to a snail’s pace. More room to boogie around the dome is sorely needed.

New Orleans is a favorite destination and has proven itself as a “big game” city. From Super Bowls to college football championships to Final Fours, people want to come to our city for the fun and excitement it offers. By the time the NFL’s biggest game returns to town, fans will have another reason to look forward to coming to NOLA, the thrill of experiencing the Superdome. 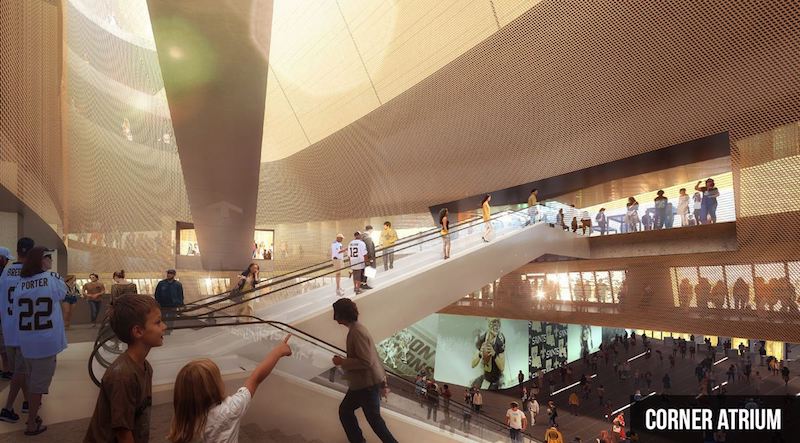