“Mignon makes jewelry that recognizes how unique we are,” Orr says. “I am a big fan of her jewelry for many reasons, but I never loose sight that she helps make New Orleans and the Gulf South great by her focus on the beauty, architecture, religion and food of this area.”

Orr’s fascination with Faget’s jewelry goes back to the days when the designer had her first shop in the Riverbend area.

“I used to go to her store and just look at her beautiful things,” Orr says. “I did not have much money at the time, so I just looked. It was a great day when I finally bought my first piece – a garnet and gold bracelet with a snail drop. I had been admiring the bracelet for a long time and it was truly a celebration when it was finally mine.”

She easily recalls the next three purchases she made.

“My second purchase was a Schema pendant on Iolite beads and pearls,” she says. “I bought it 30 years ago and wore it all the time.” Orr liked the necklace so much that she purchased a second one in brown, followed by a single knot cuff. “The purchase occurred more than 25 years ago and I still love it. I love how the clasp works,” she says of the bracelet.

A Kan collar with earrings was her next acquisition. “The earrings were huge, which was in vogue back then,” she says. “I knew people who bought that necklace because they saw me wearing it on television.”

Orr waxes almost poetic when she talks about what she feels is the essence of beauty of Mignon’s jewelry. “From the very beginning, Mignon captured the beauty of nature. She duplicated nature’s simplest forms, thus adorning women without overpowering them,” she says.

Faget used to vacation in the Perdido Bay area, and some of her first design ideas came from that area.

“My family loved to go there too,” Orr says. “It was a chance visit with Mignon at Perdido that first allowed me to see the passion she has for studying and learning everything about her intended art work before designing anything.” 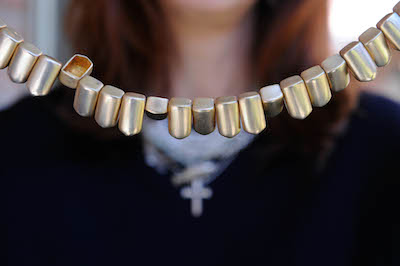 As a local television personality, Orr was pleased to have the opportunity to meet with Mignon.

“I remember taping an interview with her many years ago,” she says. “She leaned in to show me a piece of her jewelry and the camera was shooting her profile. Then she put the arm facing the camera on her hip, pushed her elbow back and moved her other arm forward. It made a pretty picture, and for the first time I realized I needed to think about how I present myself to the camera.”

When Orr did an interview with Faget for the jeweler’s 20th anniversary, she remembers coming away with a sense of how much the woman had accomplished in two decades.

“She instilled in me a goal to aim high,” she says. “And now that she is into her fourth decade as a successful jewelry designer and business woman, my admiration of her career continues.”

Orr wears Faget’s jewelry on the air almost every day.

“Right now my favorite is the triple chain necklace,” she says. “It’s very simple, and I enjoy wearing it with the Infanta pendant. Often I will add a necklace over these with one that goes with my outfit and wrap the Infanta necklace around them. I also love the Jacqueline collar. I’ve had to have that one restrung a few times because I wear it so much.”

Orr is also a fan of the jewelry designs of John Humphries, Faget’s son.

“Don’t forget to mention that I love giving Mignon Faget’s jewelry to my youngest daughter,” she says. “I think it is interesting that she has something for all ages. She is one smart animal cracker!”