The simple façade at 825 Girod St. — which once housed the manufacturing operation of Dr. Tichenor’s antiseptic medicine in the early 1900s — today gives no hint of the state-of-the art interior that belongs to the Solomon Group, an award-winning entertainment design and production firm that creates spectacular live events, brand activations, themed attractions, broadcast environments and “architainment” projects.

“Since the founding of the company in 2009 with five employees, we have grown to a staff of over 180, and we are still growing,” says one of the company’s three cofounders, 29-year-old Gary Solomon Jr., as he sits in his office wearing casual clothes and suede Ferragamo loafers without socks. The other founders are Stephen “Steve” Fink and Jonathan Foucheaux. After only two years in business, Solomon Group was tasked with a very high-profile project — installing lights on the newly named Mercedes-Benz Superdome. Since that time, the company has achieved an impressive $21 million in revenue for 2015 and a yearly payroll of $4 million.

Solomon Group moved its corporate office to Girod Street, next to a historic fire station, in 2012. Design credit for the facility goes to Eskew+Dumez+Ripple, a premier New Orleans architecture and planning company. 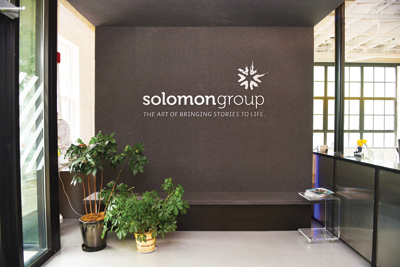 LEFT: Purchased in 2012, Solomon Group’s office façade gives no hint to the state-of-the art interior that is the headquarters for the six-year old company with $21 million in revenue for 2015 and a yearly payroll of $4 million. RIGHT: The company’s unpretentious reception area.

“I walked into the warehouse-like building for the first time with the late Allen Eskew and he declared, ‘I can see you working here,’” Solomon says. “I immediately knew he was right, and I had total faith in Allen’s vision; I purchased the building without hesitation.”

Today the transformation of the original building is a visual candy-land of high-tech everything. Step inside that simple façade and you will find this sign: “solomongroup THE ART OF BRINGING STORIES TO LIFE.”

Once inside the building, you are soon straining your neck to see past each unique, mostly open space. Solomon’s own office is in the front corner, with a view of the warehouse-like historic buildings across the street. It is a sleek space with a large desk and black leather chair in front of a large window, which provides plenty of light. Two unpretentious chairs are positioned in front of the desk, with a computer table tucked in a corner. Across the room, a small couch fits neatly in the architectural niche created by the old building, and a small table behind the couch shows off a family photo that include Gary’s parents, Martha and Gary Sr., and him with his brothers, Sam Mickal, 27, and Conway, 23. One entire office wall is covered with framed clippings of local and national articles about Solomon and the Solomon Group.

An open bay area lined with computers on desks occupies the core of the building. Conference rooms, joint workspaces and other offices fill the rest of the building. A kitchen and dining room and nearby seating niches are tucked across from each other. Walls are wrapped with show-and-tell murals of past projects, creating an almost visual overload of interesting images.

In the beginning, the partners focused on producing groundbreaking live events and multimedia installations. “Soon we were delivering newsworthy projects for high-profile attractions for clients such as The National World War II Museum and the Mercedes-Benz Superdome,” Solomon says. “In 2011, we didn’t hesitate to acquire the assets and business of the 22-year-old Express Productions, Inc., a successful New Orleans company. The acquisition dramatically increased the company’s equipment inventory and in-house capabilities. With our own production and scenic fabrication facility, we were better positioned to serve the kinds of stunning, large-scale events and attractions that we had originally envisioned. With our expansion, we began traveling around the country to create larger and more complex productions.” 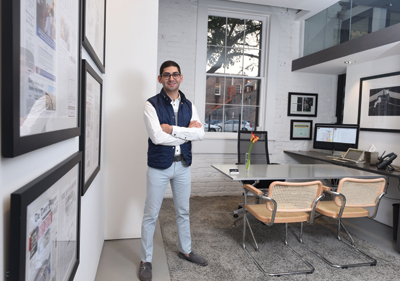 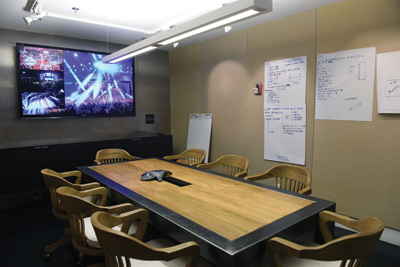 LEFT: Gary Solomon, president of Solomon Group, in his Girod Street office in the Central Business District. The building once housed the manufacturing operation of Dr. Tichenor’s Antiseptic medicine in the early 20th century. RIGHT: A large screen in the smaller conference room facilitates multi-media presentations.

Solomon is a local boy proud of his roots. “I attended St. Martin’s Episcopal School and graduated from New Orleans Center for Creative Arts (NOCCA) in 2004,” he says. “Then I headed to New York University’s Tisch School of the Arts, where I graduated in 2008 with a degree in theater design.” He is the first graduate of NOCCA to serve as president of the NOCCA Institute’s Board of Directors. “It is an honor to be a part of the continuing success and growth of NOCCA, a school I believe in 100 percent, that shaped my life in such a positive way.” He is also a member of the Advisory Council for Innovation + Design program at St. Martin’s.

Solomon’s admiration for his late grandfather, T.G. “Teddy” Solomon, is evident as he shares how the elder Solomon built a movie theater empire that stretched across eight states. “My grandfather was an amazing man who always had the ability to see the big picture in business,” he says. “I am proud of the legacy of my grandfather that includes many import philanthropic endeavors, including providing the funds for The Solomon Victory Theater at The National World War II Museum.”

He also has kind words for his father. “He has been a very successful venture capitalist, and he has followed in my grandfather’s footsteps of giving back to the community in many ways.” He is proud to be very close to his parents who meet with him each month to find out what is going on in his business. “I call them my board of directors.”

Solomon and his company’s success haven’t gone unnoticed in the national media. Inc. Magazine recently named him “30 Under 30: World’s Coolest Young Entrepreneurs,” and he has been highlighted in The Atlantic, SUCCESS and Forbes magazines and in USA Today. Inc. listed the company as one of America’s fastest-growing private companies in 2014 and 2015.

Not a person to rest on his laurels, Solomon is all about the future. “Our talented, in-house team that includes producers, designers, project managers, fabricators and technicians are dreaming up and delivering new and stunning entertainment productions for a variety of clients in the United States and Canada,” he says. 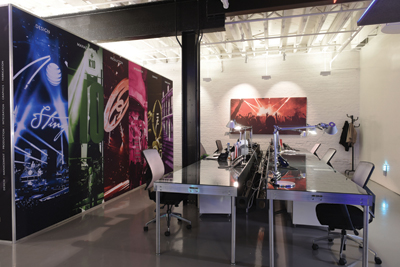 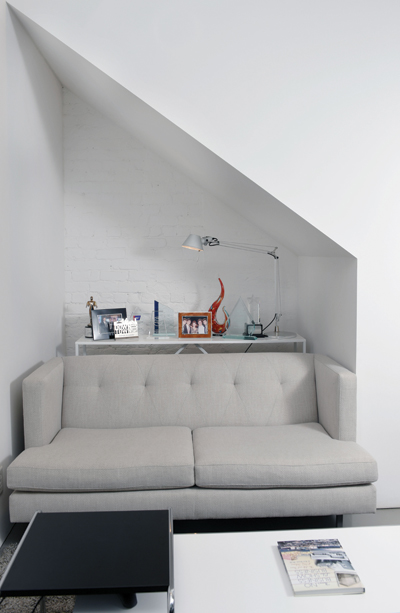 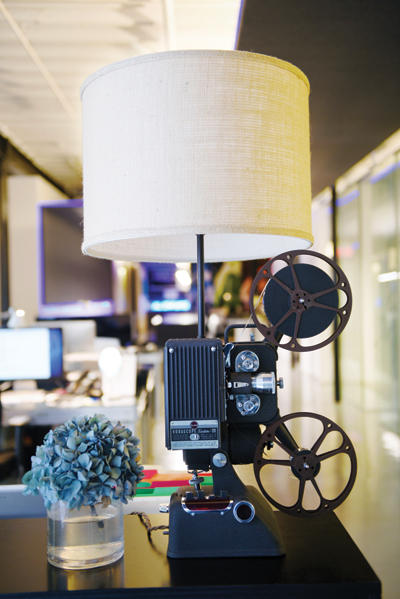 TOP: Two rows of desks face each other while a colorful large display of the company’s work wraps walls. BOTTOM LEFT: A couch in Solomon’s office fits neatly in the architectural niche created by the old building. The table behind the couch shows off a family photo, center, of Gary’s parents, Martha and Gary Sr., and him with his brothers, Sam Mickal, 27, and Conway, 23. BOTTOM RIGHT: A lamp fashioned from on old movie projector adds interest on a desk.

“We are ever-improving our 65,000-square-foot studio in Elmwood that is one of the most technically advanced facilities of its kind in the country. Here we are capable of carpentry, metal fabrication, CNC routing, professional paint finishing and more. This is where custom environments literally take shape. The transformation from rendered designs to beautifully finished forms, ready for installation, is amazing. It functions as both a production space and a fabrication shop, and we have the resources and experience to integrate technology into new or existing environments.”

One of the company’s newest acquisitions is The Print Shop, which is also housed in the facility. “It is equipped with the latest industrial large-format HP printers, enabling the company to provide grand and large-format printing and specialty graphics production service to our clients – even big enough to wrap a building,” he explains.

It seems there is no end to the vast inventory of professional lighting, video screens, projections units, audio systems and LED displays the company has available. “This means that we have the technology to turn virtually any space into an engaging environment, painted with light, sound and moving imagery,” he says. “It is here (that) our talented team has created custom broadcast environments for some of television’s most-watched events, including the Super Bowl for CBS TV.”

Solomon sums up the company with a few choice words: “We have all worked hard to craft the entire organization around making the impossible look easy. Our experience in the management of technological events and installations lets the company ground each project in the reality of building and operating complicated storytelling vehicles.”